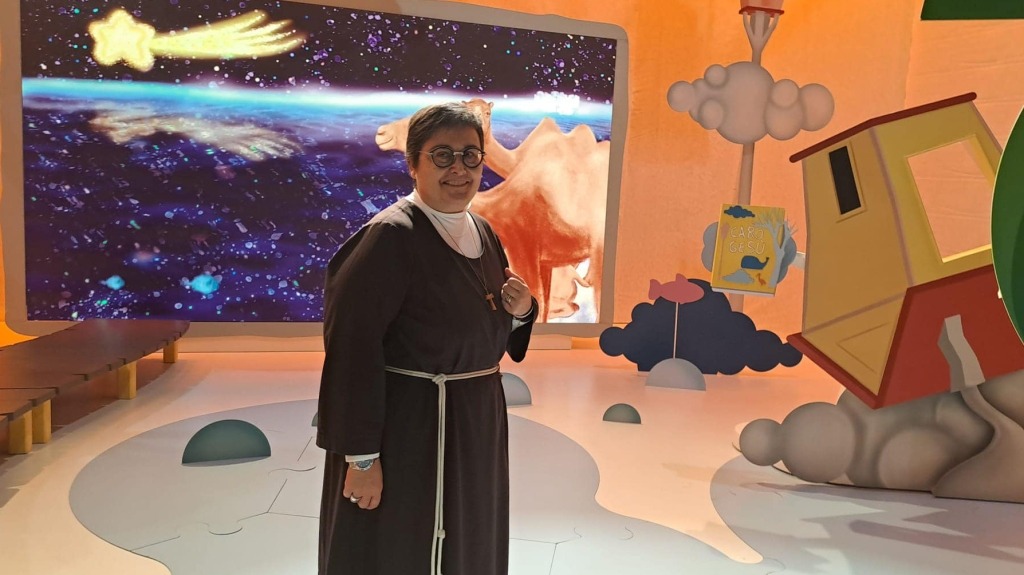 This is the story of Sister Roberta Vinerba. She was a convinced feminist, full of friends and interests. But she wondered: “Why do we have to die?” Then a priest told her “God loves you” and this announcement of hers touched his heart.

“The ways of the Lord are endless” is a proverb that fits perfectly with the life story of Sister Roberta Vinerba of Perugia, who turned 58 on December 27, the first woman in Italy to direct an institute of religious sciences, the highest in assisi, connected to the Pontifical Gregorian University.

The story of Sister Roberta Vinerba

A life story in the style of Saint Paul, with the relative, though not physical, sound of a fall from a horse. Nothing could suggest its 180° change: however, between the young protagonist of feminist battles, the unscrupulous manager of a large publishing group, the harsh anticlerical -to the point of having expected that the attack on Pope Wojtila would lead to her death- and the nun who today crosses the Tv2000 screen with her direct language there is a continuity that Roberta has no difficulty in recognizing and blessing.

The encounter with the Gospel synthesized all my questions, and even the wrong experiences were rearranged and given a new meaning. I don’t throw anything away, I don’t like to emphasize the before and after, the Lord already loved me. I have suffered more, without some things I would have suffered less, but it would be different, this is my life. I made peace with it.

The announcement that changes your life: “God loves you”

The episode takes place at a precise moment and made her lower that level of harshness and anger that characterized her.

It was 5:30 p.m. on September 23, 1987. Under the lamppost of a church, my sister tangled me up so that I could meet a priest. He was a breed he hated. She took my arm and said “God loves you.” I started crying, I hadn’t cried in years. God took my heart. It was two and a half years of furious fighting, I tried to escape. So I accepted the challenge.

Sister Roberta Vinerba: those words produced a change in me

He also told Monica Mondo on TV2000 on the broadcast of the show Soul:

«Mine is a common story from a certain point of view, because it is the story of someone who has followed his path and who at a certain moment runs into someone, a normal priest (…) a parish priest who did his job and who gave me gave the most sensational announcement: “God loves you”.(…) What we call kerygmathis announcement touched my heart and began to rise in me like an earthquake (…) and produced a change in me, which is called conversion.”

The Virgin Mary showed me how strong a woman is

(…) with the femininity of the Virgin Mary. It’s not an idea, with her I understood what a strong woman is: not the angry one that I was, who necessarily had to think in terms of claims and discrimination. What she was looking for was a reciprocal relationship, where each could recognize the other as worthy. And I found this in the Gospel, in the ecclesial community. I must have been lucky too, I met some exceptional bishops who bet on me.”

In 1999 Sister Roberta made her perpetual vows at the hands of the then Archbishop of Perugia-Città della Pieve, Monsignor Giuseppe Chiaretti, consecrating himself to a diocesan Franciscan way of life.

The studies of Sister Roberta Vinerba

Study moral theology until obtaining a doctorate at the Pontifical Gregorian University, thus beginning to teach this theological subject at the Higher Institute of Religious Sciences of Assisi, and in February 2018 she was appointed director, the first woman to hold this position in Italy.

The role of women in the Church

Regarding the role of women in the Church, Roberta states:

«If a person is intelligent, it is so whether he is a woman or a man. There is a feminine genius that is not women’s quotas, it is about valuing masculine and feminine reciprocity, which always go together (…) Focusing on having more space, more prominence is the right thing to do, because the ecclesial community needs the feminine genius, as said John Paul II. But the path is not that of opposition or that of vindication, they are not evangelical categories.

I hated John Paul II but then…

«For me it was unbearable (…) I hated it, I hated it. (…) Maybe I discovered it in the night of Tor Vergata of the jubilee of 2000. Perhaps there the total surrender to this man took place. That night, that voice. And I was one of those who stayed behind, I was with the boys, I remember (…) this voice, John Paul II had a voice that already spoke to you on its own. When she said: «I see in you the sentinels of the morning of this dawn of the new millennium, because you will not bow down -now I am moved-, you will not bow down before those who do not protect life, you will repudiate war, you will take care of the dignity of the person .(…) This touched me deeply.(…) It gave face to all the search I had done in my life.»

Sister Roberta Vinerba lives in the parish of Santa María in Prepo (PG), where for thirty years he has been dedicated to the Christian formation of adolescents and young people, in addition to collaborating with Tv2000 and being the author of several books on family ministry. care and spirituality.

The question that tormented her: why do we have to die?

«I was hungry for two things (…) truth and freedom. The truth is because I had a problem, just one, I didn’t understand why it was necessary to die.(…) My life was successful, I was a leader, a person full of friends, full of interests, what I did was successful (…) but there was something terrible inside me. The more I live, the happier I am, the more I do things, the more the barrier of death will come, the absurdity of life. (…) I was looking for the answer to this, so much anger and thirst for truth.(…). And then the freedom (…) that I nevertheless experienced as a freedom against authority, freedom against the rules, freedom against the Church.

The saint of the heart of Sister Roberta Vinerba

Today, thinking about the path he has taken, he feels indebted to many, family and religious, and there is a particular saint who walks by his side:

«(…) Saint Paul structured me. I want the passage from the letter to the Romans ‘Who shall separate us from the love of Christ’ from Romans 8 as a second reading at my funeral.

A coincidence on the “road to Damascus” where both experienced the power and mercy of the Lord.

Sister Roberta: I hated John Paul II, I gave myself to him on the night of Tor Vergata

Meeting of architecture and sacred music of the world at the Fez Festival
Chile: The star of hope will continue to be ours
Paris has been an archdiocese for 400 years. His own story
Tweet
Share
Share
Pin