Appointment in Caserta tomorrow, Wednesday 21, in the Liccardo hall, with the Pro-Rector Cascetta, the president of the Magliocca Province, the councilor of the Court of Cassation Magi, the art director Magi, the teachers Tisci and Butzbach, the director of the Museum of Capua Solino, and the entrepreneur of Cagnazzo Tourism. 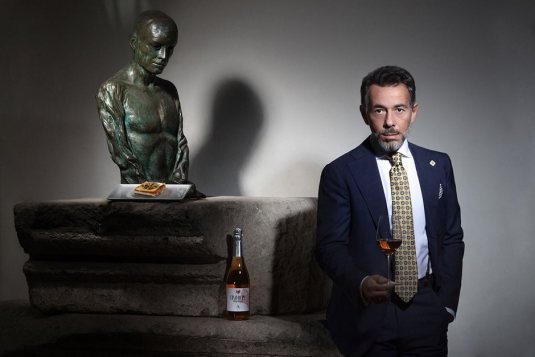 CASERTA. Professional profile and art, culture and territory, tailoring and high-ranking food and wine, interprets this and much more “Matres et Coqui”, the 2023 edition of Salvio Parisi’s calendar, now in its tenth edition, in the wake of philosophy Fashion&Food which, for some time, has highlighted the artistic riches of Terra di Lavoro and Campania, primarily the Matres Matutae of the Capua museum, and the faces of both the authentic protagonists of the area and the greatest interpreters of the culinary excellence of Caserta and Campania. The latest artistic work of the art director and advertising and publishing photographer will be presented tomorrow, Wednesday 21, starting at 10.30, in Caserta, in viale Ellittico, in the Liccardo Hall of the Political Sciences department of the University of the Studies of Campania “Luigi Vanvitelli”, whose director, Francesco Eriberto d’Ippolito, is one of the protagonists of the calendar, the first of the special tasters adopted and hosted from time to time by the world of theater or entertainment, from that of culture and art, from that of design and fashion or from the social and solidarity. For every two months, a cook and a taster, an outfit and a dish, inaugurating the new year now upon us with Rosanna Marziale, chef of Le Colonne of Caserta, in Eles Couture “oriente”, who chooses sheets of pasta, vegetables and buffalo mozzarella from Campania for the university professor Francesco Eriberto d’Ippolito, director of the Political Science department of the UniCampania of C deserted, with a dress by the Neapolitan tailor Gabo. The presentation of “Matres et Coqui” will not be held at the Department of Political Science by chance, awaiting the twinning for the creation of the 2021 calendar between the author Parisi and the same department led by d’Ippolito which, tomorrow, will open the conference and will welcome the morning guests, supported by the Deputy Rector of the Green Economy and Environmental Sustainability of UniVanvitelli, Furio Cascetta, and by the President of the Province of Caserta, Giorgio Magliocca, who will bring institutional greetings. The photographer and journalist Parisi will introduce the theme of the calendar, followed by speeches by the Deputy Director of the Department of Political Sciences Antonio Tisci, by the Vanvitelli university professor Olivier Butzbach, by the director of the Museo Campano, Gianni Solino, by the councilor of the Court of Cassation, Raffaello Magi, protagonist and face of the fourth two-month period of the calendar, and of the entrepreneur in the tourism sector, Donatella Cagnazzo. “The twinning between our Political Science department and the 2023 edition of Fashion&Food by Salvio Parisi, which gave life to the “Matres et Coqui” calendar which makes an extraordinary synthesis of the potential and excellence of our territory, stems from our goal to train students through interdisciplinary methodologies, providing the cultural tools to govern the dynamics of global society, aimed at orienting the new actors of territorial policies in the public and private sector and educating in a broad vision of international relations and integration processes region in the Euro-Mediterranean context. It is no coincidence that in the last year and a half we have invested a lot in training in the planning and management of tourism systems with the aim of training professionals in the sector of sustainable planning and territorial management of tourism with the ability to evaluate changes in the tourism phenomenon and of territorial resources”, declares d’Ippolito. “The 2023 edition takes a heartfelt look at the sense of rebirth, at the original desire for union and at an eternal concept of familiarity and fruitfulness. It involves the world of archeology and ancient Italic or Campanian art with a particular focus on the Mater Matuta of the Campano Museum in Capua, where among the magnificent tuff statues of women with children on their laps one breathes authentic auspices of spirituality and realism, ancestral worship and rituals, family and “ex voto”, nourishment and fertility: in a word, re-birth.

It collects the contemporary testimonies of this place between mystical and hieratic, hosting among the portraits of the “special tasters” six institutional and artistic representations of this prestigious museum pole, unique in the world, as well as of the Caserta area. For all this, it’s called “Matres et Coqui”, explains Salvio Parisi.

FASHION&FOOD 2023, TOMORROW AT THE DEPARTMENT OF POLITICAL SCIENCES THE PRESENTATION OF MATRES ET COQUI, THE CALENDAR BY SALVIO PARISI