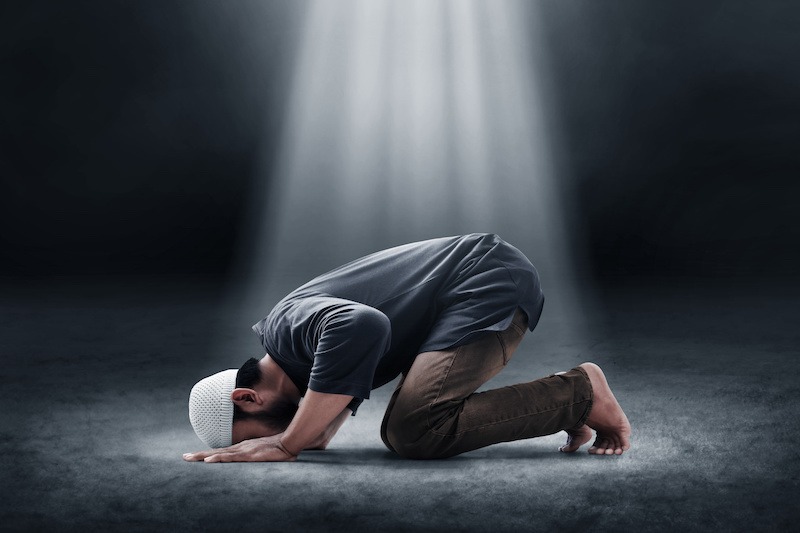 Content that combines Islam and personal development flourishes on the Internet and in bookstores. If Islamic coaching is fully consistent with the message of Islam for its followers, others condemn a deviation from religion and its submission to materialistic considerations.

“Become the best version of yourself through the prophetic model,” reads the title of this book, which is prominently displayed in a Muslim bookstore. On the back cover it reads: “When we talk about personal development, it’s hard not to think of the prophetic model: when the prophet tells you to pursue energetically what makes you feel good (…), you’re building your mindset.”

“In this beginning of the year, a time of good intentions, content that combines Islam with the vocabulary of personal development is flourishing on the Internet and in bookstores.”

The panorama of these publications is as vast and unclassifiable as that of secular personal development, and the dose of religion varies according to the content: you can find a “book-coach” “based on the principles of Islam”, planners to practice the faith throughout the week, or a podcast offering “tips for developing positive thinking” produced by a “100% Muslim” account. For its followers, Islamic personal development is fully consistent with the religion. For other Muslims, by contrast, it represents a departure from their religion in favor of “materialistic considerations.”

“You feel good all day and, on top of that, you win paradise.”

On the Miracle Fajr podcast, two young girls get excited: one explains how she got used to her morning routine, the “Miracle Morning” – a method popularized by American “Success Coach” Hal Elrod, which involves getting up very early to optimize the day- with the dawn prayer (Fajr).

So, instead of going back to sleep after the prayer as her parents did, the young woman takes advantage of this moment of suspension to carry out all kinds of activities. “I knew that miraculous morning was great,” she says, “but let’s not forget our original intention: to get up early for Allah’s sake.” This ritual seems to reinforce both her personal balance and her faith: “When you put your intention in Allah, you win everywhere,” she continues. “You feel good all day and, on top of that, you win paradise.”

So “Islamic wellness” or rather… “Islamization of wellness”? For Laëtitia Bucaille, sociologist and co-director of the book Desirs d?islam. Portraits of a religious minority in France (with Agnès Villechaise-Dupont), the affirmation of a Muslim identity does not escape the trends that run through society: “The search for personal fulfillment, authenticity and uniqueness, the desire to feel good is typical of all young people”, points. According to her, this phenomenon is not so much a sign of communitarianism as the result of “a compound fusion, with the same drifts as elsewhere, around alternative medicine or gurus.”

In these contents, the correct Islamic praxis can be seen as a path to well-being, or even as a form of empowerment. In her interviews with young Muslim women, Laëtitia Bucaille had already observed that “religion, and its practice, is perceived as a protective framework that reassures them, structures them and responds to the most existential daily anxieties”. Even more so in a society in which “reference points are not necessarily very clear.”

Inés (not her real name), 28, credits the personal development provided by Islam with helping her get out of a difficult situation. Exposed to the media as a veiled woman and fired from her job as a result, she began to “consume” a lot of personal development content before creating her own company. “Personal development helped me take back power over my life, change my mindset to become aware of the field of possibilities, and realize that my decisions had an impact,” she says.

Inés considers that this mentality is completely consistent with her religion, which invites her to “fight for the best”, and is inspired by the “role models” of the Prophet Muhammad and his wife Khadijah, whom she sees as an “entrepreneurial woman “. In fact, much of the content mixes personal development with business advice.

But on the Internet, other Muslim preachers warn against Islamic coaching. Most come from conservative ranks and denounce the individualism, the cult of the ego and the search for performance that underlie these discourses, but also the “New Age” drifts and abusive canons, habitual criticisms of secular personal development. These Muslim preachers also consider it a deviation from Islam.

One of them attacks what he denounces as a concentration of Muslim preparation on earthly pleasures to the detriment of the afterlife. “Without neglecting the life of this world, the Muslim is invited to relativize the importance of this brief passage on earth (…)”, says Vincent Souleymane, converted to Islam in 1999 and today an influential rigorist preacher. “But personal development knows only one world: this world. The search for success and fulfillment would therefore be, for him, “an emanation of materialistic society.”

For his part, Professor Sofiane Meziani criticizes the valorization of the autonomous individual and master of his destiny to the detriment of faith. “In these techniques, it’s more about developing self-confidence than trust in Allah,” he says.

These controversies reveal a debate between competing visions of Islam. Identified as one of the faces of Islamic personal development, Ismail Mounir, a YouTuber with 340,000 subscribers, provides paid training and posts a considerable number of videos, some of which are titled: “Five tips to increase your faith”, or ” Three Personal Development Tools in the Qur’an”.

The former imam claims to offer “a popularized and simplified approach to Islam, adapted to the French context and focused on meaning.” Muslims are served an obsolete, harmful and guilty discourse”, affirms the man, who wants to contradict rigorous approaches, focusing his discourse on “spirituality, values ​​and ethics”.

Drawing inspiration in particular from the writer Frédéric Lenoir, Ismaïl Mounir assumes associating personal development techniques with Islam: “If this can help us deconstruct limiting beliefs, manage our time better and feel better in an Islamic context, I don’t see why it would be detrimental,” he justifies. So do you believe in yourself or do you believe in Allah? For followers of Islamic personal development, the art is finding the right balance.

If the contents of personal development cover very diverse realities, they nevertheless have a common denominator: “Proposing to individuals that they intervene on themselves to improve various aspects of their lives (work, social or love relationships)”, explains the sociologist Nicolas Marquis (Author of Du Bien-être au marché du malaise), interviewed by the weekly L’Express. He notes that one of its main features is therefore “to assert that most problems and wishes can be addressed using a limited number of universal methods.”

Islam and Wellness: The Controversial Success of Islamic Personal Development

"Walden. Or life in the woods": a book to return to love nature
Polymita: the love of good books
Paola, Benedict XVI was very close to San Francesco Patron of Calabria
Tweet
Share
Share
Pin