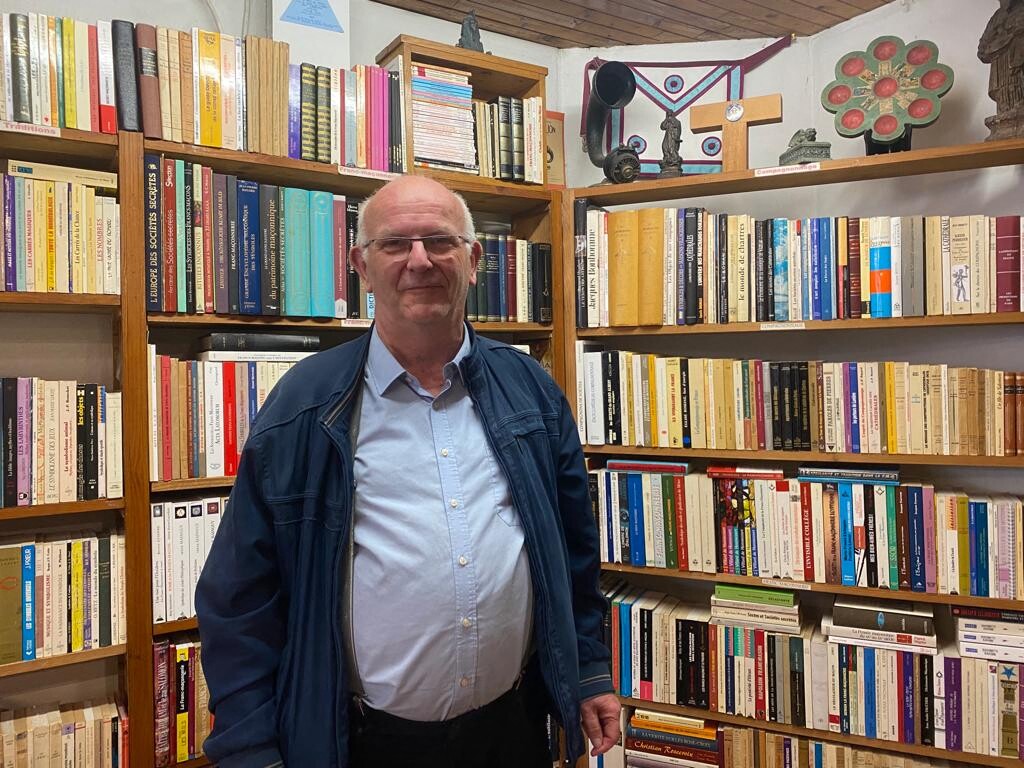 For many years, Denis, 72, has been at the head of a library articulated around theesotericism and some spiritualityat Nancy.

Passionate about sacred geography, in other words the study of a place from a religious or even symbolic angle, the manager has, in parallel with his activity, embarked on writing. But he had no idea that the publication of his writings was going to radically change your life.

Spotted by those he now calls “his freemason brothers“, more than 20 years ago now, the septuagenarian took the plunge in turn and entered the Freemason. For Lorraine NewsDenis talks about “those things” that the uninitiated are unaware of.

“Freemasonry is not a sect”

From the start of our exchanges, Denis insisted: “Freemasonry is not a secret society, but a discreet society. And, even less a sectaccording to the principal concerned.

There is a big difference between a quiet society and a cult. A sect, one enters it very easily, but to leave it, it is another business. On the other hand, it is “difficult” to become a Freemason, but you can stop everything without having to justify yourself.

But precisely, how do you become a freemason? Like Denis, it is possible to be spotted. You can also be supported by a “ godfather“. “If in his entourage a Freemason considers that a person is likely to bring things to society, he can advise the members of the lodge. » More classic this time: interested parties can send a letter of application.

The ordeal of going under the blindfold

However, as Denis pointed out, it is not because one sends an application letter, or even that one has the support of a sponsor, that one becomes a Freemason in a snap. of fingers. First comes the time of theinvestigation.

First, there is an investigation. One cannot become a Freemason if one has a criminal record, for example. Then, three members of the lodge will interview the candidate to find out more about his aspirations. If the interview is conclusive, it is subjected to the test of passing under the blindfold. To put it simply: the layman is summoned to the temple and blindfolded in order to preserve the identity of those present. There, he undergoes a flurry of questions. It can be: “Do you believe in god? What do you think of racism? How important is tolerance?”

Once the ordeal is over, comes the vote. “The Freemasons present, after having heard the candidate’s answers, decide. Voting is done using white and black balls. If there are 75% of white balls, then the person is admitted. Otherwise, his application will be refused,” specifies Denis.

After initiation, the candidate becomes apprentice freemason and take “courses”. And, if he wishes to move up to the next rank, he will have to earn it.

After two or three years, the apprentice must embark on a written work on a given theme. If it suits the assembly of masters, then he will pass to the next rank: that of journeyman. But, again, it doesn’t happen that way. There is real work behind it. For the anecdote, a former president wanted to become a Freemason. But, he didn’t want to go through the grades of apprentice or journeyman. He wanted to be master. Which was not possible, even if Monsieur was President of the Republic.

If he wishes to remain a Freemason, the apprentice will have to “keep a check”. Because it is entirely possible to be removed of the society.

Among the Freemasons as elsewhere, there are rules. If a member gets in trouble with the law, they can be fired. Same thing if he does not respect Masonic secrecy: if he reveals to others, for example, that his neighbor is a Freemason. One can say that one is a Freemason, but one must above all not say that such and such a person is.

A thousand Freemasons in Nancy

According to Denis, Nancy counts nearly a thousand Freemasons. Both men and women. And, if they do not carry it on them, the septuagenarian, he is able to recognize them.

Between us, we recognize each other by sentences that are significant. But also by what is called the Freemasonic touch, a particular way of shaking hands. All this is essential, because we cannot risk speaking in the presence of a layman.

Moreover, if the profane cannot attend ceremonies, they are sometimes invited within the temples.

Once or twice a year, and here I am taking the example of a box reserved for men, the wives, and sometimes the husbands, are invited to share a meal. At the end of the dinner, it is explained to the guests that they did not take an oath, but that they rubbed shoulders with Freemasons. They are therefore offered a rose, hence the expression “not to reveal the pot of roses”, so that they conceal what they have been able to see and hear.

“There is a real brotherhood among Freemasons”

Like sports clubs, a contribution year round is required of all Freemasons, between 200 and 300 euro according to Dennis. And, contrary to popular belief, “there are not only financially well-off people”.

In Freemasonry, we find all social classes. Pharmacists, notaries, carpenters, workers… All the corporations are represented. As for the contribution, it is used to pay for the premises, the acquisition of the decorations and to finance the meals. Because, each assembly, (there are one or two assemblies per month), ends with a meal.

A solidarity fund also exists. And Denis is well placed to know it since he took advantage of it at the opening of his bookstore.

Among the Freemasons, there is a real fraternity. When I started my business, I had some tough months. One day, I mentioned it to a brother in my lodge and he replied “how much do you need?” I then told him that when my situation was better, I would issue a refund. He replied that it was not worth it.

And the support doesn’t stop there. “Let’s imagine that a manager of a company is a Freemason and that a brother is looking for a job. If jobs are to be filled, he will choose it much more willingly, because he knows that they share the same values” adds the septuagenarian.

“I am on the right path”

Freemason for more than 20 years, Denis absolutely does not regret his choice. “My life changed when I became a Freemason. I met people, big names who, through their work, their way of being, their attitude, managed to convince me that I was on the right path. »

Becoming a Freemason allowed me to improve myself, to know myself better. I am more respectful of traditions, of things around me. I am also more attentive and less in “action, reaction”. In Masonry, we are taught to consider the thesis, the anti-thesis and to synthesize. Thus, the decisions we make are more considered.

In other words, Denis does not intend to leave Freemasonry anytime soon.

Was this article helpful to you? Note that you can follow Lorraine Actu in the My Actu space. In one click, after registration, you will find all the news of your favorite cities and brands.

I have been a Freemason for over 20 years: here is what you did not know about our society