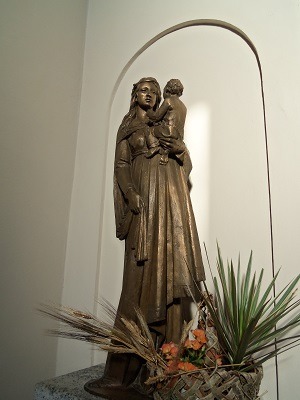 An anniversary – as it happens for various birthdays or anniversaries – can be an occasion for new acquaintances and reminders of unexpected, unexpected affections. So it is perhaps for the sixtieth anniversary celebrated with joy by the small group of Romite Nuns in a little-known monastery, rooted in an ancient history and set in a very green space.

In fact, the official foundation of the community in the former Benedictine monastery of Bernaga, located on the top of a small hill in the province of Lecco, dates back to 8 September 1962. On that date the then archbishop of Milan, Cardinal Giovanni Battista Montini, with the choice of the building, started the cloistered experience of a community that was to be led by Mother M. Candida Casero.

And after 60 years on the same 8 September – the anniversary of the Nativity of the Virgin to which the Milanese Cathedral is dedicated and the opening date of the diocesan pastoral year – the current archbishop of Milan, Monsignor Mario Delpini, retracing the steps of his holy predecessor, he goes to the monastery to celebrate the solemn Vespers of the Marian feast with the nuns and the faithful.

A simple and intimate ceremony where the Rite of Light shines with intense meaning. That “living flame” has remained alight in these six decades: a precious time not in its mere quantity, but because it has allowed many to get closer to God thanks to a place ruled by women who have chosen a life of prayer.

After the recitation of vespers, the archbishop expresses gratitude and blesses those present and friends of the monastery who have benefited from the silence, talks and meditations offered. In a brief reflection he presents the figure of the newborn Mary as the sign of one who totally entrusts himself to God and – in her fragility – expresses strength in welcoming Grace. At the entrance of the Monastery, on a plaque, with large letters, this motto is carved: “God is enough for me”.

Stories of women in history

The origins of this community – as well as for families, groups and both secular and religious associations – are rooted in intertwined historical events. We refer to the “great history”, marked in this case by monastic experiences dating back to the early modern age with subsequent reforms, then ecclesiastical expropriations and reacquisitions; and we connect it to no less great history made up of singular spiritual and existential choices, at times outlined by very lively charisms.

The story of the hermit nun Maria Candida Casero (1913-1989) – documented by some also autobiographical texts – takes off in the most famous monastery of the Sacred Mount of Varese where a hermit community and, in the mid-15th century, two women aggregated – Caterina da Pallanza first and Giuliana da Verghera then – choose to live in prayer, initially isolated (Romite will be their name), but able to accommodate other female presences.

In 1474 Pope Sixtus IV – at the request of Galeazzo Maria Sforza – authorized the erection of a monastery which, according to Catherine’s wishes, would follow the rule of Sant’Agostino and the constitutions of the Order of Sant’Ambrogio ad Nemus. In 1769 it will be Pope Clement XVI to proclaim Caterina and Giuliana blessed. “Important” names and others apparently secondary mark a centuries-old story.

But let us return to Sister Maria Candida, elected Mother Abbess of Bernaga in 1967. She belonged to the same Varese Community of the Romite (in which she joined in 1935) and defined Blessed Catherine “a true giant, a colossus of holiness, penance and sacrifice”.

Surely attracted by the choice of a courageous woman of the fifteenth century, who leaves everything to retire in prayer, but above all persuaded of the need for a radical and at the same time fruitful contemplative life, she confides her desire to Archbishop Montini and asks for support: thus with eight sisters, she left the monastery of Sacro Monte di Varese to found that of Bernaga.

She was responsible for the birth of two other monastic communities still alive today: in Agra (VA) in 1974 and in Revello (CN) in 1986. The archbishop, later Pope Paul VI, will favor the restructuring of the monastery. A space that the pope’s personal secretary – Monsignor Pasquale Macchi – loved so much that he spent the last years of his life there. 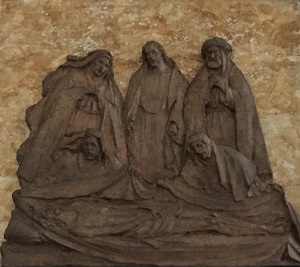 The monastery dominates a small hill in the green of Brianza and inside is embellished with contemporary works of art that the monsignor himself donated to the monastery.

In fact, the rich artistic sensitivity of Paul VI is well known who, even with the help of his secretary, wished and favored a significant renaissance of sacred art during the years of his pontificate. On the walls of the small chapel of the Monastery – sober and cozy “cell” for prayer – an intense Via Crucis unfolds.

Composed of 14 bronze panels with elegant bas-reliefs, it is signed by Enrico Manfrini (1917-2004), a sculptor who was a pupil of Francesco Messina and formerly in the chair at the Brera Academy. Also by Manfrini the crucifix placed in the same chapel.

The statue of the Virgin there is by the living sculptor Mario Rudelli (1938). Furthermore, a portrait of St. John Paul II, hanging in the parlor, is the work of a woman: Dina Bellotti (1912-2003) who, not by chance, made herself known as “the painter of the popes”.

The chapel, the parlors are frequented by people from different socio-cultural backgrounds – Mother Maria Alessandra tells me. Please, we have talks with women with a lively spirituality, we reflect with them on existential and faith choices that are not simple.

In the face of the evidence of scarce religious vocations and profound spiritual crises even between consecrated men and women, it should not be ignored that the history of the Church is dotted with critical periods where precisely the monastic reforms have favored rebirths and fertile experiences of religious life. The cloistered choice of contemporary women is an explicit reminder that deserves greater resonance.

When I go to these isolated monasteries, sometimes placed on high ground, the voice of the prophet Ezekiel accompanies me: “Son of man, I have set you to watch over the house of Israel” (Ez3.16). And so St. Gregory the Great comments on it in times of barbarian invasions: “It should be noted that when the Lord sends someone to preach he calls him with the name of sentinel. The sentinel, in fact, is always on a high place, in order to be able to see from afar whatever is about to happen “.

The monastery, whose first stone was blessed in 1628 by the then cardinal Federico Borromeo, has been a place once again manned by a small group of women-sentinels who watch over it for 60 years. They deserve attention and listening.