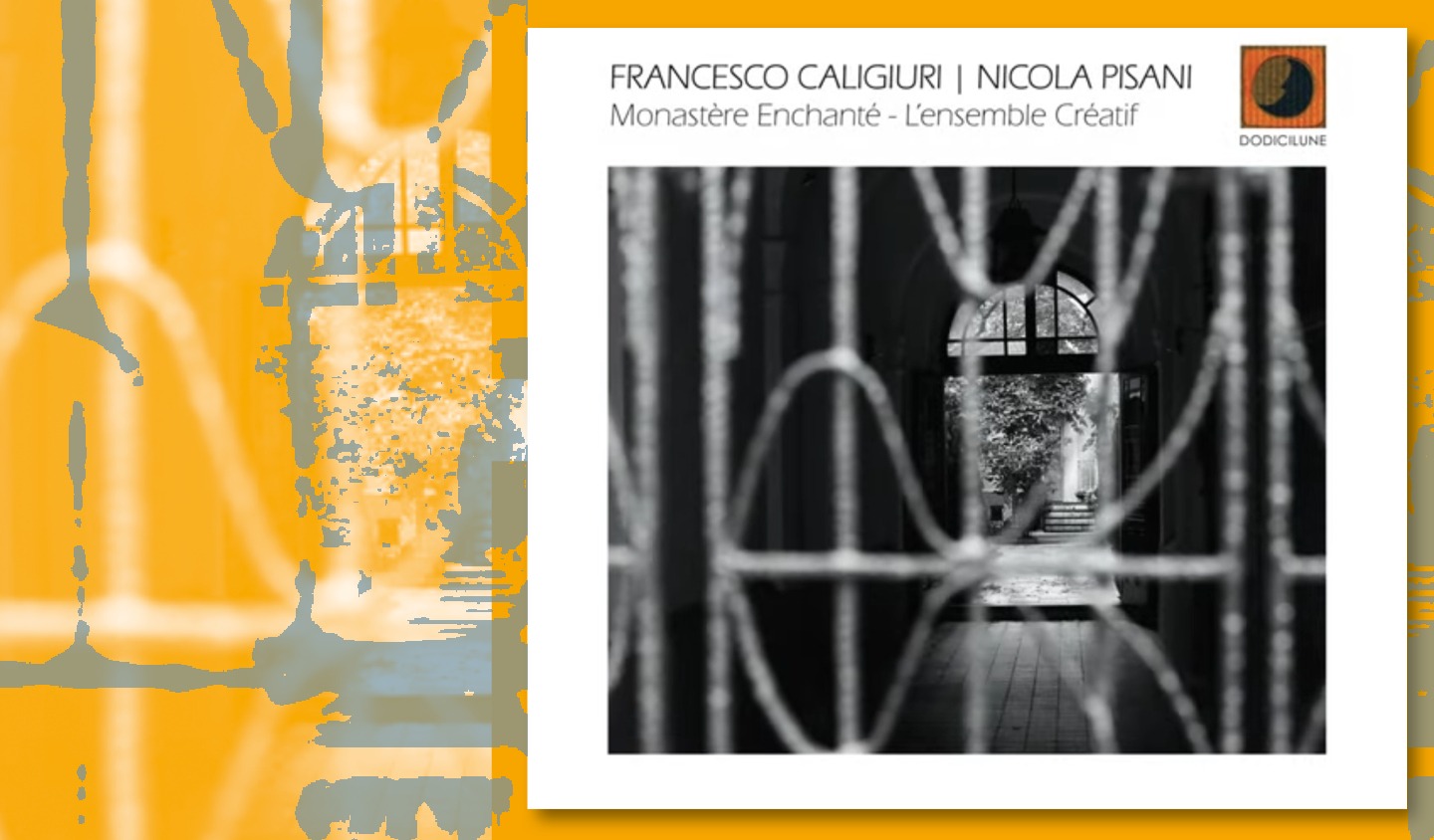 Locum Sacrum is the name of a jazz festival organized inside the Convent of San Francesco di Paola, located in Spezzano della Sila in Calabria. A magical place, where spirituality and the sacred accompany visitors and, in our case, characterize the music of a fascinating record directed by saxophonists Francesco Caligiuri and Nicola Pisani. Deeply spiritual music therefore, which envelops the listener and projects him into another dimension, where melodies with an ancient flavor are crossed and enriched by improvisational impulses and meditative dialogues. The creators of this particular project are the Monastère Enchanté quartet and the L’ensemble Créatif sextet who divide the 14 tracks on the disc almost equally. The quartet, in addition to Francesco Caligiuri (soprano and baritone sax, bass clarinet) sees the presence of Michel Godard on the serpent (ancient French instrument of the 16th century), Paolo Damiani on cello and Luca Garlaschelli on double bass.
The Créatif ensemble is made up of Nicola Pisani on soprano sax, Eugenio Colombo on flute, Francesca Donato on vocals, Giuseppe Oliveto on trombone, Checco Pallone on frame drums and plucked string instruments and Francesco Montebello on percussion. As can be easily seen, in addition to the two saxophonists, Caligiuri and Pisani, the first responsible for the original compositions and arrangements of the quartet while the second author of the arrangements of the Ensemble, the list of musicians present is of absolute value, which is evident from the very first listen. And if Colombo, Godard and Damiani, historical exponents of European improvisation, were still certain of their abilities and sensitivity, the same must be said of the other musicians, with a special mention for Luca Garlaschelli, notable on the double bass both pizzicato and with the bow.
The music, as mentioned at the beginning, was recorded inside the Convent and the sacred aura, a sense of transcendence and asceticism pervade each piece. The general aesthetic is so strong as to make the entire work homogeneous, as if it were played by a single ensemble changing from time to time in composition but with the same result. And so Caligiuri’s original compositions, clearly Renaissance and Baroque, certainly do not disfigure in front of the beautiful What can be done by 17th century Venetian composer (and soprano) Barbara Strozzi, or ¾ by Henry Purcell (also 17th century English composer) Strike the violin, at the end of the disc and characterized by a free improvisation, tenuous and sophisticated, conducted by the three wind instruments of the Ensemble Créatif. In general, the delicate atmospheres created by the melodic lines intelligently inspire the improvisational aspect, as if this were inherent in the piece, its natural evolution. This happens for example in the original Sombre mystérieux IV, with Godard’s bewitching and mysterious improvisation on the serpent, which delicately flows into a short and sweet melody. Or even the splendid solos of Colombo, Pisani and Oliveto, always counterpointed by the percussions of Montebello, in that jewel with an ancient yet modern charm which is O Let Me Weep (The Plaint) by Henry Purcell.
The work of the two strings is also noteworthy: Damiani and Garlaschelli dialogue with mastery and rare sensitivity, for example in Les fleurs of the temptation or in the ending of Lumièreoften creating fertile ground for Caligiuri’s interventions (nice baritone sax in Sombre mystérieux II) and Godard. Of great charm is the soprano voice of Francesca Donato, whose melodies are often commented and crossed by the incisive and velvety flute of Colombo, as in the aforementioned What can be done, as well as the delicate percussive work of Montebello which unobtrusively underpins all the compositions played by the sextet. Enriched, this, also by the complex work done by Pallone on the stringed instruments, which sometimes give a slight oriental flavor, and skilfully intrigue the listener.

In this inspired short circuit between ancient and modern, writing and improvisation, dance and meditation, the two compositions by Charlie Haden, Our Spanish Love Song and especially Silence, shine particularly not only for the choice of including one of the great protagonists of the history of jazz in this program but also for the arrangement and execution. In particular, the poignant Silence, with a top-level solo by Pisani to enrich the entire piece. A choice that rightly closes a circle: the practice of improvisation, heritage of much European music for many centuries and then sunk by the affirmation, between the eighteenth and nineteenth centuries, of the great orchestral ensembles and the figures of the composer and conductor, returns to the United States with Afro-American music, mainly blues and jazz. And this disc has the great merit of making the improvisational inspiration flow harmoniously and spontaneously, outlining a path that reaches from the ancient to the contemporary, skilfully combines writing and improvisation and reconnects the thread between the extemporaneous European Renaissance and Baroque composition with the African American tradition. Caligiuri writes:

“This disc was born as an original production of the nascent Jazz Locum Sacrum Festival which aims to document and disseminate ancient music intertwined with improvisation. The Convent of San Francesco di Paola was the setting for the musical magic, the third hermitage built by the Holy Wonderworker and located in Spezzano della Sila in Calabria. A place of worship and profound spirituality: a sacred place. Nicola, Paolo, Eugenio, Michel, Luca, Francesca, Giuseppe, Checco and Francesco are the people involved in the making of this record: musicians with a profound artistic and improvisational sensitivity capable of bringing antiquity, sacredness and freedom into symbiosis of improvisation.”

Ancient improvisation between enchantment and creativity