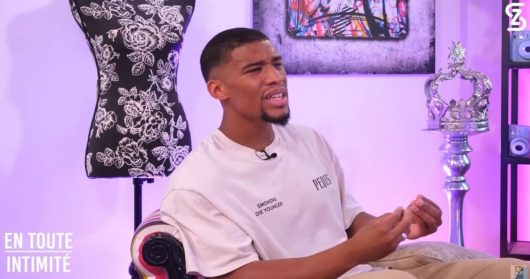 Sam Zirah invited the reality TV candidate Abou in the last episode of his show on Youtube and the ex of Léana made the buzz with his declarations during their interview on his descent into hell following his marriage, “I discovered my wife without a veil, in a thong, in a bed smoking”he confided in particular.

Since the broadcast of his interview with Youtubeur Sam Zirah, Léana’s ex finds himself in the Top Trends in France on Twitter with nearly 100,000 Tweets. Abou participated in La Villa des Coeurs Brisés 6 and became known following his relationship with Léana before joining the cast of La Bataille des Couples 3 during which they separated. Single, he joined 10 Perfect Couples 5 before surprisingly announcing his religious marriage several months after the filming of the show.

Unfortunately for Abou the fairy tale has turned into a nightmare, the young man confided in the face of Sam Zirah on this drama by revealing that his companion is a manipulator. Their union took place in March 2022, he was then very discreet and his fans thought he had found happiness, but it was quite the opposite. “She gave me a helping hand with religion, spirituality, the veil too… She was a veiled ‘oukhty'”he began to explain.

“A connection was made, we were on the same wavelength. I was like crazy! We quickly talked about marriage. Everything happened really fast ! It was beautiful, I believed it. You give him the good Lord without confession” he continues before describing, “Everything was fine, we saw each other a few times. We didn’t touch each other, not a kiss, we waited for the wedding. Abstinence. It was complicated to feel the potato coming… I made a crazy marriage proposal in February. We do the hlel in March. (…) I take my truck and I’ll get all his things in Toulouse. We move to Paris. Everything is going great. But, I discover that she is sickly jealous! ».

They flirt with the veil!

“I had found a certain spirituality, but this person played on that (…) You really have to have lived with a manipulator to realize how strong it is! (…) I cut myself off from the networks. I even stop my coaching with women! I give him a roof, food, money. I give her everything, because she is a woman who has never worked in her life. I put everything aside. » Abu confesses. “What stumbles over me is hiding behind a religion. Today, some girls no longer flirt with mini-skirts, Louis Vuitton bags and Louboutins. There, they flirt with the veil. They tell themselves that they are going to pass for a pious, virtuous girl, but that is not the case. You have to see them all in the 9.4 to wear the veil. (…) I was fooled! » he then laments.

“She cheated on me with several men for several months before and after the wedding! This woman who prayed with me… You have to see the hypocrisy! One day, I wake up suddenly and I go to see in his blocked Snapchat accounts. I see there are 6 guys stuck. I contact one. I’m falling 10 stories! He tells me that he slept with her during Ramadan when she was downstairs. He sends me proof of my veilless wife in a thong in bed smoking a shisha with my ring on her finger and the holidays he had with her! » he concluded by assuring that it is only a tenth of the story and to have found himself hospitalized after having lost 15 kilos.

Abou deceived by his wife whom he discovers without a veil, in a thong and smoking »