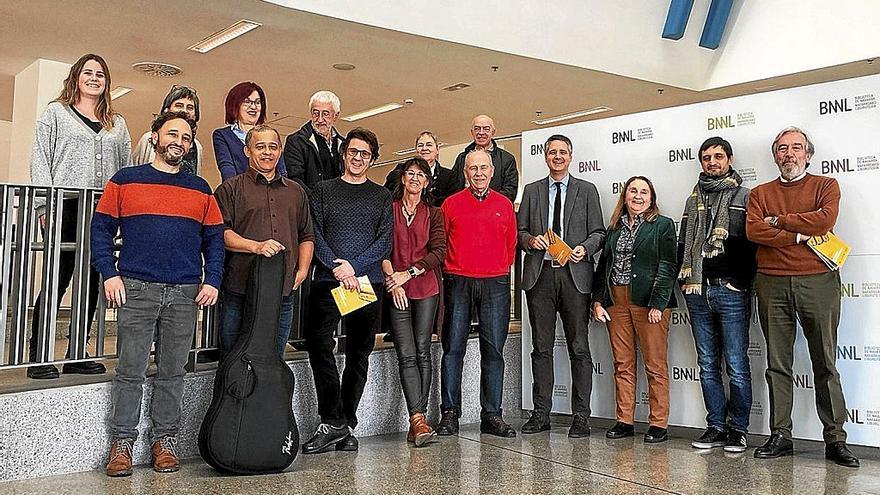 The Library Service of the Government of Navarra is committed to a program of activities for the first quarter of 2023 in which it intersperses already established cycles with innovative proposals.

The Library of Navarra will resume consolidated cycles such as the Spirituality waves literary conversations; will host the festival for the first time literate you and will honor Pablo Milanés on the occasion of Poetry Day, by the hand of Cuban singer-songwriter Jorge Sánchez. In addition, several programming projects are also developed in other libraries in the network, among them Pamplona Negra, Literarte, Libraries and seeds or the emotional health program.

The General Director of Culture – Príncipe de Viana Institution, Ignacio Apezteguía and the management of the Library Service held a meeting yesterday with personalities and representatives of the entities participating in the first quarter programming, which counts among its novelties with the festival literate you, emerged from the alliance between the reading clubs of public libraries and the company Producciones Maestras. The festival will start on January 24 in the Projection Room of the Library of Navarra with the first performance, which will take place at 7:00 p.m., and will extend to the rest of the libraries in the network, with activities in Zizur being confirmed for the moment on February 23, in Alsasua on April 19, in Tudela on April 21, and Noáin on May 18.

Next Tuesday, January 17, the fourth edition of the cycle will begin literary conversations coordinated and presented by Roberto Valencia, in which six authors of various nationalities will chat, every fortnight, about topics as exciting as the recent history of Spain (Sergio del Molino, Un tal González), the conformation of reality through Buddhist and Hindu thought and Western thought (Juan Arnau, On the Mind of the World), the fatal woman in cinema and literature (Elisenda Julibert, Fatal Men), fear (Bernat Castany, Philosophy of fear), evil (Ana Carrasco-Conde, Saying evil) and blindness in literature (Lina Meruane, Las escrituras del ojo).

inside the project Saharako Kabiak – Sahara Nests, in January and February there will be a cycle of Saharawi cinema by the Fisahara festival, recognized with the 2022 González Sinde Award. The cycle of talks will also continue, with the first taking place on January 23, in which Maite Ramos and Ana Larragueta They will present the Kabiak project and the collaborative work with the School of Art and with the Artistic Bachelor of the IES Iturrama in Pamplona / Iruña. On February 27, Lahebib Breika Abderraman, Sarahawi delegate in Navarra, will speak about Human rights in Western Sahara.

On February 22 there will be an open book club about the desert nurse, a novel by Jorge Molinero Huguet, with the presence of the author himself and the protagonist of the book. The activity will be completed with a tasting of Arab tea and pastries.

Children will also be able to get to know and participate in this project with two activities, one on February 8, with the presentation in Basque of the story Hiru Miru by its author Josu Jiménez, and the illustrator, Maite Ramos; and on February 22, a kamishibai session in Spanish, on the Saharawi oral tradition.

The Libraries and seeds project will continue with talks and workshops, and the event organized by Pamplona-Iruña Spirituality will return, under the title Liberation of suffering.

To celebrate Women’s Day, the children’s room of the Library of Navarra will host the story session in Basque Berdintasuna maite dugulako / For the love of equality, by Inés Bengoa. On the other hand, you can see the Empowered exhibitions. Fair Trade Women (SETEM) and Being a Woman in Guatemala, is also accompanied by a sample of textile crafts.

On March 21, Poetry Day, the Library of Navarra will have the presence of the Cuban troubadour Jorge Sánchez, who will offer a tour of the work of Pablo Milanés. The programming for this first quarter is completed with a talk on March 7 with the Italian essayist Nuccio Ordine and the editor of Acantilado, Sandra Ollo.

The ‘Literarte’ festival joins the programming of public libraries