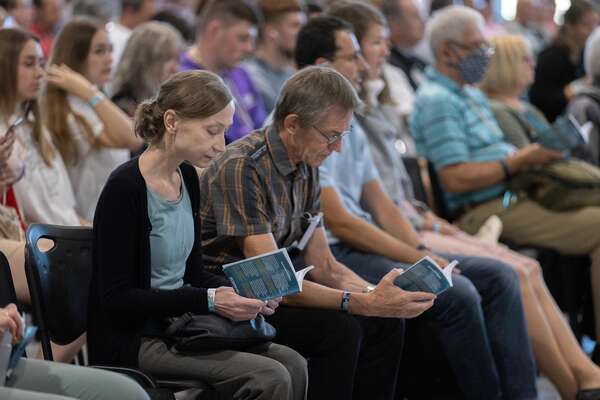 The word discernment it is at the center of the will of St. Ignatius to be able to guide souls. Discernment means understanding, understanding and evaluating in life what the voice of the gospel is and what, instead, is dictated by other impulses.

The saint, in the text of the Spiritual Exercises, often returns to the theme and does so in different ways, such as during the third week in the meditation of the Two banners in which we are called to choose between the call of the eternal King and that of the temporal king.

Means, purposes and will determine the choice that must be made, as St. Ignatius observes, with the awareness of looking the needle of a balancethat is, pondering every situation without being guided by false myths or personal limits.

The Ignatian method includes various suggestions including the Rules on discernment. These are placed at the end of the book of Exercises and are useful suggestions to be able to read in the daily life of one’s choices.

For convenience the saint, even if the discourse could be more complex, uses the metaphors of good spirit and that of enemy of human nature. The language is affected by the fifteenth century, the century in which the text was composed, but it is effective and very clear.

The gospel always and only wants man’s happiness. Every good choice must be oriented towards doing good and serving the brothers. A selfish option devoid of evangelical teaching is a path which, as the saint’s mysticism underlines, does not lead to true joy, but only to a sterile withdrawal in oneself and should not be undertaken.

The consolations (moments of joy and tranquility of the heart) may follow desolations (moments of uncertainty) and vice versa. In this alternation the soul must go on without breaking down in the second state letting itself be guided by the joy that only the Father can pour into the heart.

The method was used by the saint, when wounded in the siege of Pamplona in 1517, he was called to experience a harsh convalescence. In this you discover the meaning of his life, abandoning the path of arms to put yourself at the service of God.

From the text of the Spiritual exercises:

Among the many Rules, composed for the first and second week of the Exercises, here are some:

“Third rule: spiritual consolation. Consolation is meant when an interior stimulus is produced, by which the soul is inflamed with love for its Creator and Lord, and therefore cannot love any of the realities of this world for itself, but only for the Creator of all; so also when one sheds tears that lead him to the love of the Lord, both for the pain of his own sins, both for the passion of Christ our Lord, and for other reasons directly ordered to serve him and to praise him. Finally, by consolation we mean every increase in hope, faith and charity, and every interior joy that stimulates and attracts to celestial realities and to the salvation of the soul, giving it tranquility and peace in its Creator and Lord.

Fourth rule: spiritual desolation. By desolation we mean quite the opposite of the third rule, for example the darkness of the soul, the inner turmoil, the urge towards low and earthly things, the restlessness due to various agitations and temptations: thus the soul inclines to distrust, she is hopeless and without love, and finds herself lazy, lukewarm, sad and as though separated from her Creator and Lord. For just as consolation is contrary to desolation, so the thoughts which arise from consolation are contrary to those which arise from desolation.

How do I live the words of the saint?

I can be balanced with respect to the choices to be faced?

Consolations And desolations what drives my existence in the service of others?

Spiritual exercises, the discernment of spirits in Ignatian mysticism