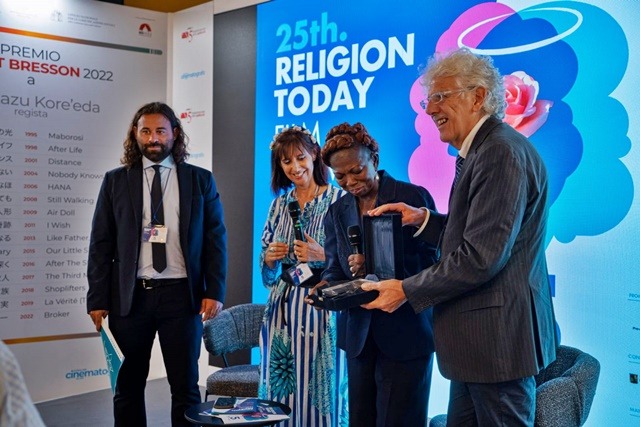 The round table «Dialogue between faiths, from a female perspective» opens an incredible edition for Religion Today Film Festival in Venice

>
In the prestigious setting of the 79th Venice International Film Festival, an edition full of content was presented, which from 14 to 21 September 2022 will involve the public of Religion Today in the celebrations for its jubilee.
From 14 to 21 September Religion Today will bring 42 films in competition from 23 different countries, 11 national premieres, 4 European and 1 international premieres to Trento and its surroundings. 50 guests will participate, the Women of Faith for Peace movement and there will be 3 exhibitions, 3 concerts, 10 debates, 10 masterclasses for young people.
Also this year the aim of the Festival will be to meet people and dialogue with them, thanks to its itinerant approach: starting from Venice, then screenings will be held in Trento, Baselga di Pinè, Arco, Dro and Bolzano.

The press conference was opened by the round table “Dialogue between faith seen from a female prospective”, led by 3 women who symbolize intercultural and religious dialogue: Azza Karam, Secretary General of Religions for Peace International, professor of Religion and Development at the University Vrije of Amsterdam and member of the High Level Advisory Board on Effective Multilateralism at the United Nations.
HH Anita Evelyn Stokes Hayford, former Ambassador of Ghana to Italy, Turkey, Greece, Croatia and Slovenia; the first Ghanaian to lead the Executive Board of the World Food Program; she was Permanent Representative of Ghana to FAO (United Nations Food and Agriculture Organization) and IFAD (International Fund for Agricultural Development).

Lia Beltrami, founder of the Festival and the Women of Faith movement for Peace, Golden Lion for Peace 2017; director with 53 documentaries and short films to his credit, representative of Religions for Peace at FAO and president of the production company Aurora Vision.
Faith and art are seen by Professor Azza Karam, who belongs to the Muslim community, as the fulcrum from which to draw ideas for meeting and confrontation, especially in the face of the beauty of differences: “Faith, art and cinema are fundamental ingredients for promoting a culture of peace: the arts must dialogue together, with faith as direction. “ 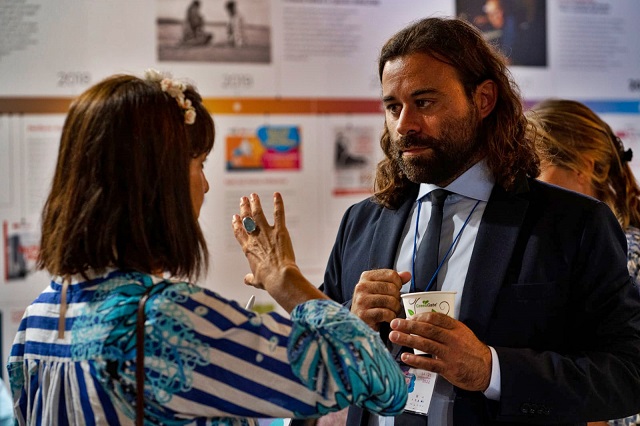 “Starting the celebrations for the 25th anniversary of Religion Today during the Venice Film Festival represents an important moment of union between cinema and the dialogue between faiths, religions and cultures” explains the director and writer Lia Beltrami, who continues “In 25 years Religion Today has always tried to work as a beacon of “cultural diplomacy”, creating bridges, relationships and broadcasting high-value films. It seemed important to us to experience this 25th anniversary by focusing on the dimension of dialogue, as the main feature of the festival: we do it in Venice with a debate on the role of women of faith in building peace. Today more than ever we must go back to filling the word peace with meaning. “

Among the numerous international guests present, also the producer Roberto Bessi, a prestigious name in American and Italian cinema, who will be at Religion Today with the film “Ride back to freedom”, a docufilm in search of the meaning of freedom by the Austrian director Hermann Weiskopf.
In the prestigious location, hosted by the Fondazione Ente dello Spettacolo, the winner of the prize conferred by the «Religions for Peace International» was declared: the movement that for more than 50 years has been committed to providing effective multi-religious answers to the urgent problems of the world.

The president of the BiancoNero Association, Alberto Beltrami, and the artistic director of Religion Today Film Festival, Andrea Morghen, awarded the film that most of all captured the spirit of interreligious dialogue, among the 6 international films selected by the jury. international: “Dead Sea Guardians”, by Ido Glass and Yoav Kleinman, a documentary that crosses the stories of 3 boys, a Palestinian, a Jordanian and an Israeli, who decide to join forces to go beyond the conflicts of their countries and fight to save the Dead Sea.

During the press conference, the public was also excited by the projection of some images from the exhibition of the Bengali photographer Asaf Ud Daula, multi-award-winning international artist: “Emotion to Generate Change” which will be exhibited during the Festival, from 14 to 18 September, between Trento and Pinè .
The trailer of the 25th edition of Religion Today was also presented, with a “mash up”, the result of the history of this festival, which tells about faces, stories, faiths and art: a phrase from Don Tonino Bello sums it up: indifference to conviviality between differences. “

Religion Today was born in 1997, founded by Lia Beltrami and today carried out by the BiancoNero Association, with the aim of making a journey into differences, promoting independent cinema on spirituality and the comparison between cultures and faiths.
In recent years, more than 18,000 films and documentaries have come to the event, 2,200 artists and directors from all over the world met, while the spectators were more than 50,000.
The program of the 25th edition of the Festival will be presented at the Teatro Sociale Trento, with a launch press conference on 6 September 2022 at 11.00.

The director Morghen has launched the appointment for September 14, when the Festival will officially begin with the opening ceremony, with free admission, of this jubilee of Religion Today: at the Teatro Sociale di Trento, at 8.30 pm, the dances will open with a unforgettable intercultural show: from the fascinating dance of the Sufi dervishis of the Sufi Ensemble Rabbaniyya, to the intervention of the director of Avvenire Marco Tarquinio, to the tribute to Lucio Dalla by the Trentino singer-songwriter Alberto Beltrami, to conclude with the Sosat choir «Dal Trentino al Mondo And with the guitar of infinity by Anthony Mazzella, a world-famous artist.

Religion Today Film Festival, realized thanks to the contribution of the Autonomous Province of Trento, the Trentino Alto Adige-Südtirol Region, the Municipality of Trento, the Cinema Direction of the Ministry of Culture, has also signed an important partnership with Montura, a brand leader in the mountain and outdoor clothing sector, which through its creative laboratory and publishing house “Montura Editing” will bring its own contents developed over the last twenty years and will give impetus to the Festival’s activities and its promotion also outside the regional borders.
Important, as every year, is the contribution of the Archdiocese of Trento, through the staff of the Diocesan Missionary Center, which with professionalism and attention manages the reception of the numerous international guests of the Festival.