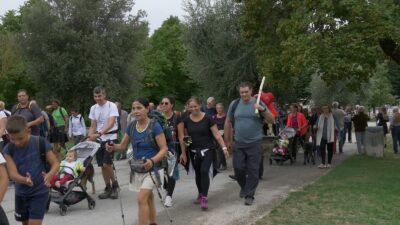 With the arrival of the pilgrims in Gubbio, the fourteenth edition of The Path of Francis.

“It is certainly a very significant edition: first of all because it is the first since the pandemic, with the return of many friends and brothers from various parts of Italy and also of Europe. All with the great desire to make this journey once again in the footsteps of Francis, retrace this history of newness, reconciliation, liberation, fraternity and also with the desire to live, in the simplicity of these days, new friendships and a time of immersion in creation “.

The bishop of Gubbio, Monsignor Luciano Paolucci Bedini, summarizes in these words the three intense days of the pilgrimage which started from Assisi on September 1st and arrived in the Città dei Ceri on Saturday 3rd, after passing through the village of Valfabbrica. At the Gubbio park of Reconciliation that embraces the church of Santa Maria della Vittorina, dozens of pilgrims on their way arrived with songs of joy. Not even the pouring rain of recent days has discouraged them. There were children, families, those who are used to walking alone and this time discover the beauty of sharing, those who are experienced travelers and those who are just starting out and discover the path right on the Via di Francesco.

To welcome and greet the pilgrims de The Path of Francis there was also the Gubbio mayor, Filippo Stirati, who once again underlined the importance of the journey and the contribution to the Franciscan identity that comes from the city of Gubbio.

On the place that remembers the meeting between St. Francis and the ferocious beast that terrified the Gubbio, the Prize is awarded Wolf of Gubbio for reconciliation to the Confraternity of San Jacopo di Compostella, which is based in Perugia and welcomes pilgrims in various hostels along the Francigena, the Camino de Santiago and the Via di Francesco.

For some years, on the Franciscan path, the diocese of Gubbio has entrusted the Hermitage of San Pietro in Vigneto to the Confraternity.

Here is the motivation for the award: For the fraternal spirituality and the generous welcome that the volunteers offer and share with the pilgrims walking along the streets of San Francesco, San Giacomo and along the Francigena, supporting them with simplicity in their path of reconciliation with themselves, with their brothers, with God and with Creation.

The Giampietro Rampini ceramist from Gubbio condensed all this into the majolica delivered by Bishop Luciano to the historian Paolo Caucci von Saucken and to some volunteers of the Compostela Brotherhood.

“We interpret this award – commented Professor Caucci – as a very precise sign: the Bishop, the diocese and the city of Gubbio want to give an impulse to welcoming people on this pilgrimage route. Welcome and hospitality are fundamental because the hospitium is the place where pilgrims are hosted as welcome people, as people to be welcomed as if they were at home. Faced with the great events that we have in the coming years, especially with Franciscan anniversaries, the great Roman jubilee and a new Compostelan holy year, I believe that this award means the need to strengthen the very structure of hospitalesbecause it is necessary to do so “.

With Paolo Caucci von Saucken, the awarding of the prize also becomes an opportunity to take stock of journeys and pilgrimages in Europe and Italy, a few weeks after the end of the Jacobean holy year, on 25 July last. Pilgrims on the Via di Francesco are growing: this year they will exceed the pre-pandemic numbers, also according to the reception data at the hermitage of San Pietro in Vigneto outlined by the Confraternity.

“In these days in Santiago de Compostela – says Caucci- the pilgrim number three hundred thousand this year has arrived and not all of them are registered, practically about four hundred thousand pilgrims have already arrived on foot.

This determines a consequence in all fields, even in tourism, given that the hotels in Santiago de Compostela in the month of August were at 90-95% of occupancy. So it is not only a religious phenomenon but also a social, economic, political and anthropological phenomenon because we are seeing that the types of pilgrims also change. They are not always the same, the ages change, they are seasonal, in summer they are younger and in spring they are more mature: a very interesting phenomenon. On the Way of Francis – continues the historian and rector of the Perugia Confraternity – an already very motivated pilgrim arrives, who seeks Saint Francis mainly and through the Saint obviously seeks God, spirituality and interiority, so there is already a choice upstream “.

The 2022 edition of The Path of Francis it closed, as usual, with the celebration of Holy Mass at the church of San Francesco in Gubbio, presided over by the bishop Monsignor Luciano Paolucci Bedini.