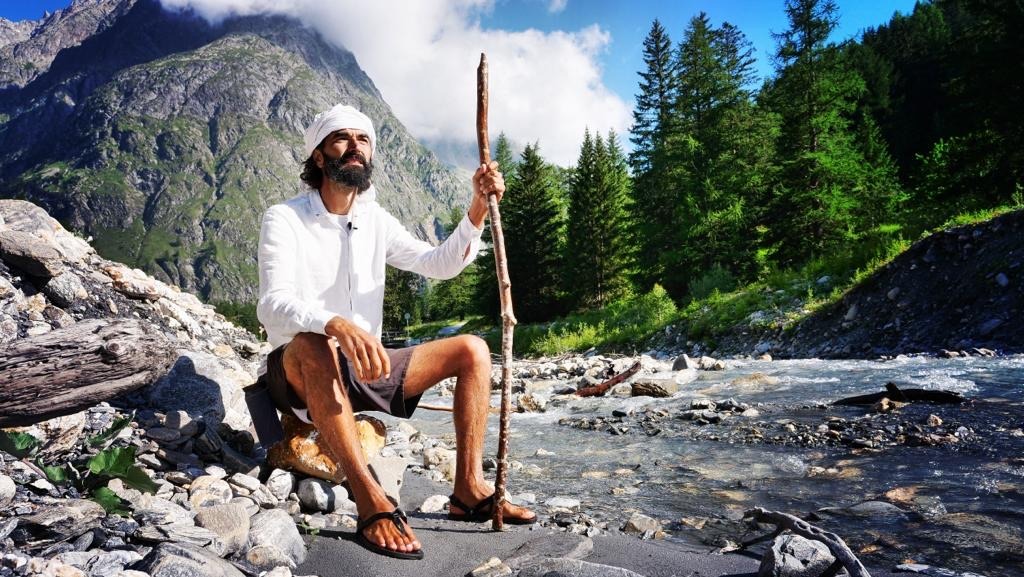 Impossible is not… Strasbourg, it seems. Reading his curious challenge, one wonders why (and how) the Muammer Yilmaz from Strasbourg embarked on this adventure: to go around Mont Blanc, on an empty stomach, for 11 days! To explain his motivations, he made a film of it with his longtime friend, Milan Bihlmann: The Great Fast [Tour du mont Blanc, sans manger. À la rencontre de nos sagesses oubliées].

Presented Wednesday, January 25 at UGC Ciné Cité in preview by the duo of adventurers-travellersit is an invitation to travel, to adventure, to minimalism, to surpassing oneself, and to a rediscovery of “forgotten wisdom”.

On the occasion of its release, we are giving away ten places to attend the preview/meeting at the end of the article. In the meantime, we tell you more about the film, after viewing and asking a few questions to the main interested party: Muammer.

The smile on the lips, friendly and curious about others, Muammer Yilmaz is a well-known figure in Strasbourg. Born in Colmar, of Turkish origin, this “great traveler who loves the world” [comme il se décrit lui-même] has long since passed beyond the borders of Alsace.

Aged approx. “17,000 days” [« parce que la vie mérite d’être célébrée chaque jour » rajoute-t-il à ce propos]he has no less than 99 countries visited, more than sixty trips and challenges each crazier than the nextwhich made him known to the general public, here and abroad.

With his longtime friend Milan Bihlmann – his “travel brother” – , he founded the association Optimistic Traveler in 2014 “which supports actions of generosity and solidarity”. By his side, he does the same year Around the world in 80 days, without moneythen The Tour de France in a 2CV, without money (2015), I have a dream: Africa (2016) and finally, The Camino de Santiago without luggage (2020). Adventures that the duo retransmits in films, books and conferences. In July 2022, a new challenge and not the least for Muammer: that of doing the Tour du Mont Blanc… On an empty stomach.

A mythical hike that crosses three countries (France, Italy and Switzerland) on 162kmwith no less than 10,000m drop altogether, for the courageous duo. “One of the most beautiful hikes in Europe. […] An exceptional beauty » specifies Muammer… Breathtaking landscapes, which we also enjoy admiring throughout the film.

On camera, let’s talk about it, this time it’s only Milan. Because if on the previous films, the two friends shared the production, they divided the task differently for this film, leaving all the space to Muammer to concentrate on his personal ordeal. Milanomeanwhile, had another challenge to overcome: film and carry the twelve kilos of material necessary for filming.

The Great Fast: a possible challenge?

Left with only a thermos attached to the belt, a light rain jacket and a meat bag in the pockets (to sleep in a refuge), shorts, a linen shirt and sandals special trials on the feet, Muammer once again experienced simplicity for this trip.

Like his predecessor (on the way to Compostela), this follower of zero-waste and minimalism got rid of everything he considered non-essential to his journey… Food included. Indeed, the additional challenge this time was to climb these peaks, “without eating, quenching your thirst only with mountain water”.

However, it is important to make it clear right away: if Muammer embarked on this ordeal, this is not an incentive to do the same. If our adventurer recommends take care of your body by consuming differently, healthierand to experience fasting, he advises, however, to be accompanied.

And that’s because he is accustomed to the practice of fasting (after a dozen in his life), walking, meditation and overcoming his limits and his fears, that the adventurer felt up to the challenge he imposed on himself. “A life of preparation”, he explains. And shortly before, he recounts having done “a week of walking in Turkey in the mountains”and ” court[u] 10 km per day every day before starting »…

A mind of steel, a body exhausted

Besides, despite prior preparation, the mind that followsand a good entourage during his journey, the film testifies to the real physical difficulties encountered. Exposed to hunger, therefore, but also to cold (whether in the rain, in the snow, while bathing in frozen water), Muammer pushed his limits to an exhaustion never felt before.

If he was not tempted by the people who ate in front of him (in shelters, for example), the most complicated thing for him to manage was above all the progressive lack of strength over the days. The more the days progressed, the more the march slowed down: “every day, I felt like I was getting ten years older physically. It was not easy, but the slowness helped me to succeed”.

He ends the trip on his knees, on the verge of tears. After the ordeal, he spends three days lying, the body completely at a standstill: impossible to get back on its feet… While the mind was clear, able to work, read, telephone. It took two weeks to fully recover his form and mobility, and the resumption of sport.

It was a real apprenticeship in overcoming. But he only gets positive things out of it, and thus underlines the benefits he has derived from it. To have come out stronger physically and mentally, with the certainty in mind that he is capable of facing anything. To have purified after drinking for 11 days “purest water”breathed “purest air”, etc.

He also emerges with a new awareness of ultimately quite simple pleasures: “When I eat, I am happy [avec] anything that suits me and is good[…]. To have this pleasure – to eat – […] because it feeds you, it transforms your diet: when I eat a banana, I don’t just eat a banana. I know that she offers herself to me, and transforms into me, and allows me to be me. […] There is an exceptional spiritual connection that is made and that changes your outlook on life”he laughs.

He also says he is no longer afraid to walk up the five flights of stairs to his apartment, after having “climbed the equivalent of 3300 steps”and evenavoid the elevator to access the tenth floor of a building.

A walk, encounters and “forgotten wisdom”

However, this was not an easy task and required preparation. Supported and filmed on his journey by his friend Milan, Muammer was also accompanied by several traveling companions.

We thus find another Strasbourg resident: Damien Eissen, a refrigeration specialistinstructor of the Wim Hof ​​method (Netherlands) with whom he completed an internship… Which today allows him to experiment his fifth winter in Strasbourg in a T-shirt and sandals!

We also come across author and humanist Ludovic Hubleralso a great traveler (and founder of TWAM (Travel with a mission)), as well as Guillaume Charroin (high mountain guide and fasting specialist (Clairière and Canopée)). La blogger and traveler Ghadir Alshabilialso a follower of minimalism, is also in the game. Inspirational personalitiespreviously encountered during his travels and who share here, in turn, beyond a day of walking by his side, their values ​​and philosophies of life.

This is also why the subtitle of the film is “Finding forgotten wisdoms”. Because each of their meetings addresses a theme dear to the duo: the experience of cold, minimalism, fasting, meditation, openness to others and to nature…

If they have all their importance, one of them was particular for Muammer: the one with Swami Jyothirmayah, a great yogi from India (The Art of Living), the ninth day. “Very soothing and pleasant to walk with him. […] A very wise, very benevolent man”recalls Muammer who, in the film, practices meditation alongside him on one of his most difficult days.

On other days, the duo was sometimes followed by walkers met by chance. Sometimes useful aids to entertain, encourage or even support the duo who have long advocated mutual aid. An ode to sharing and solidarity, against a backdrop of magnificent landscapes…

If the challenge of fasting and walking is extreme for most of us, the film however makes you want to take your walking stick and explore the nature that surrounds us. To take the time to savor the trip, without rushing, at our own pace, eyes wide open and like Muammer: a smile on your face.

The contest game: 10 places to win for the preview!

To try to win one of the ten places stakes for attend the exclusive preview on Wednesday January 25 at 7:30 p.m. of The Big Fast: Tour of Mont Blanc, without eating. Finding our forgotten wisdoms and to meet Muammer Yilmaz (who will celebrate his birthday there that day) and Milan Bihlmann and their guests, all you have to do is:

Stay tuned on Messenger: we’ll contact you if you win!

Otherwise, you can always take your place for the event (reservation required) this way.

Preview and meeting with the film crew Muammer Yilmaz, Milan Bihlmann and their guests

Link to the ticket office (only by reservation)

To see more about Optimistic Traveler and their previous projects

“Le Grand Jeûne”: the film of a Strasbourg resident who circled Mont Blanc on an empty stomach

ContextMinds: a mind mapping tool exclusively for SEO
'Santo', the new Netflix series: two policemen in search of a faceless murderer for one of the most ...
[Ensayo] Rafael Álvarez "El Brujo": The mastery of a yogic minstrel
Tweet
Share
Share
Pin