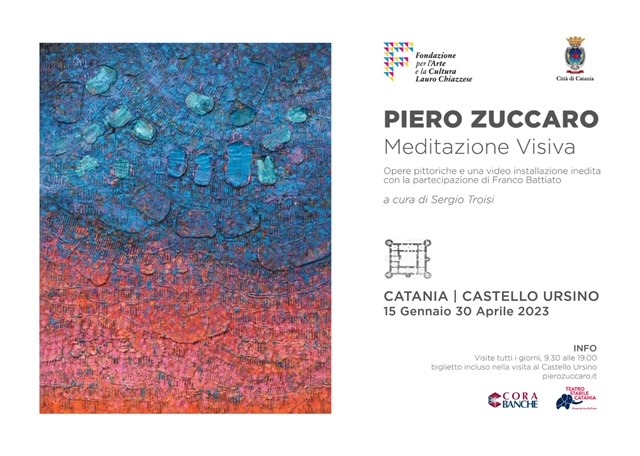 Is titled “Visual meditation” the exhibition of Peter Zuccaro which, between painting, music and poetry, crosses the profound sense of spirituality of Franco Battiatostarring with the author of an unedited video installationgenesis and cornerstone of the exhibition project scheduled in Catania, in the halls of Ursino Castle, from January 15th to April 30th 2023. The exhibition is produced by Lauro Chiazzese Foundation for Art and Culture with the sponsorship of Municipality of Catania and the partnership of Permanent Theater of Catania for the fixtures and lights.

The exhibition will be inaugurated today, at 18:00.

Among the interiors of basilicas with golden reverberations, dimly lit domes illuminated by glimpses of light, the blue of distant skies that fades at sunset, a narration will be staged at Ursino Castle mystical and rarefied, punctuated by forty works by Piero Zuccaro, artist and professor of painting techniques at the Academy of Fine Arts in Catanzaro. Three cycles brought together for the occasion by the curator, the art historian Sergio Troisi: 14 oils, 12 pastels and 20 serigraphs culminating with the video-installation meditative “Uncertain and Oscillating Interior” conceived, written and directed by Zuccaro with the participation of Franco Battiato (1945-2021) on the long and intense notes of the Kyrie, the first movement of the powerful Archaic Mass: a project cherished for a long time by the two artists, developed over a period of time between 2013 and 2017 and which sees the light on the thirtieth anniversary of the composition of the work, performed for the first time in the upper Basilica of San Francesco in Assisi, in October 1993.

The unmistakable voice of Battiato, recorded in 2017, completes the installation while he recites the verses of Shitao, a Chinese painter who speaks here of the “purity of the spirit” as a prerequisite for “authentic painting”. While Zuccaro makes him the words of St. John of the Cross who asks God to manifest his presence.

Here is the preview of the unreleased: Piero Zuccaro and Franco Battiato Visual meditation – YouTube

The exhibition is realized with the partnership of Permanent Theater of Catania whose technicians followed transport, lights and exhibition set-up. While the catalog – in progress – will have the editorial look curated by Francesco Messina, art director and graphic designer to whom Battiato has entrusted the cover of several albums. Sponsor of the Cora Banche project.

Peter Zuccaro. Visual Meditation” will be open to the public from 15 January to 30 April 2023. Visits every day, from 9.30 to 19. Entrance to the exhibition is included in the ticket for the visit to the Ursino Castle Civic Museum (full price 10 euros, reduced 5).

Piero Zuccaro was born in 1967 in Catania, where he graduated in Painting at the Academy of Fine Arts. During his years of study at the Academy he came into contact with the artistic environment of Catania; here he meets the master Franco Sarnari, an important guide for the growth of his pictorial research. The encounter with artists of the sixties and seventies – from Guccione to Ruggeri, Forgioli, Consagra – led him to confront the national and international art scene and critics. Music and dance enter his training path, thanks to the attendance with the maestro Franco Battiato and the collaboration with the choreographer Donatella Capraro. The research path takes its first steps from the masters of the European Informal of the fifties: from De Stael to Burri to Morlotti, through the study of the first Mondrian, a synthesis between figuration and abstraction. In 1997, a one-man show at the Andrea Cefaly gallery in Catania underlined Zuccaro’s attention to the subjects observed at the port: the stagnant sea full of oil and the reflections on the dark water.

The reflected image, in particular, becomes the dominant theme and place of research; a research conducted at times with openings towards abstraction, as Piero Guccione pointed out in the text in the catalog for the 1998 solo show (Galleria Nuova Figurazione, Ragusa). More recently, Zuccaro’s research has explored the internal light of architecture, in particular the internal spaces of sacred places. Piero Zuccaro teaches Painting Techniques at the Academy of Fine Arts in Catanzaro, lives and works in Catania.

Catania, at the Ursino Castle the works of Zuccaro and an unpublished video installation in which Franco Battiato took part (Video)