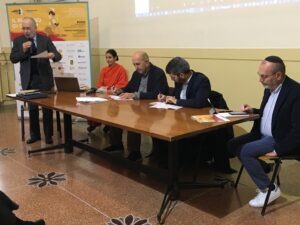 In the biblical text that speaks of Cain and Abel, the theme of “Voice of your brother’s blood.” In Hebrew, literally, we actually speak of “bloods”, in the plural, perhaps in a reinforcing key, and certainly in the sense of “sspilled blood”. The “bloods” of Abel “gthey laugh at the sky. It is a sdisturbing point. We know it – continues Garrone -. Today Abel’s blood is exhibited live. We see it daily on the news and in the press. Sometimes more modestly, but more often not. The Padosso concerns the question: what emotions does this cry of today arouse in us? The risk is that of the ahabituation, which is indeed a defensive reaction, but runs the risk of not making us understand the extent of this cry”. On Cain’s fault, again, he says: “If it is too great, a lettore Cristiano could say that God can ‘lift up’ sin. Cain never left, and neither did Abel. The Vthe problem is we who are, on average, neither Cain nor Abel, as we have not killed anyone, and we are not tortured or exterminated. We have to figure out how to stand responsibly in the world, among the perpetrators and the victims. We are in this intermediate area, which we could define as a gray area, where, however, there is the risk of shizophrenia, such as the one which in Shoah led to the atrocity of Nazi anti-Semitism. And where at the same time there were those who got themselves killed to oppose it and those who instead shared the anti-Jewish measures. We are in this tI fear that I can become Cain or Abel. As cristiani let’s make an rAbel’s theory, as driven by a sort of attraction for the victims. If you are a victim, you are good. But if when Cain approaches Abel, Abel turned around, and escaped, or took revenge, he would no longer be Abel. So it happens today, in congoing conflicts, in migrations. We cannot resolve the issue through dichotomies or without acknowledging that we are in the midst of the ambiguities of the mondo”.

Yassine Lafram, President of the Union of Communities iMuslims in Italy (UCOII), spoke of dialogue as an experience, and reaffirmed theimportance of the meeting, beyond the differences, in the clarity din their respective positions. “If God had wanted to make us a single community he would have done so, instead he made us different – ​​he said quoting the Koran -. God created Peoples and tribes so that ‘you might know each other’, it is written”. Lafram also underlined the need to “make dialogue pandemic, not only in the religious sphere, but also by taking it elsewhere, where it is not considered necessary, where it seems anomalous. For example in a film festival like TMFF”. Lafram also recalled how, in the Koran, FrThe first sin committed by humanity is that of Satan. God asks Adam and Satan to be dismayed, the latter refuses saying that having come from fire it is better than the earth, the clay of which Adam is made. “A pity of shubris, that of feeling better than others. Then – continues Lafram –

the first crime of humanity comes, in the first family of humanity, and this crime takes place between brothers”. There are diverse opinions and interpretations of the exegetes, but in the following text, when speaking of the children of Adam, the Koran recognizes the sacredness of human life.

The rabbi Benedetto Carucci Viterbi in his speech he spoke of the bonds of brotherhood in the Bible, from Ishmael and Isaac, a Esau and Jacob, a Joseph and his brothers. It is “rconcrete contributions, of a humanity that is born from a fratricide”. Good and bad, in the text as in theexegesis, are difficult to disentangle for Judaism. “In some Jewish interpretations, however, Cain is the first human being who repents. When he says ‘the mI sin is too heavy to bear (?)’, as a question or as a statement, it can be said that God be able to forgive even that fault. It is a vers key. A sort of confession.” Relegate Cain alone in the sphere of evil is a simplification, argues the rabbi. Also, when the padre questions Cain, who says “I repented and found an agreement. A mediation”, Adam realizes it is possible, and says he will try to repent himself. “Cain teaches his father. The father follows what the son teaches” said Carucci Viterbi. “Knowing means mixing – he added, quoting Adam and Eve who, mixing good and evil, even in the metaphor of the union, have introjected both -. Constitutively, the human being is therefore made up of two instincts. In us, there are Cain and Abel together”.

Swamini Shuddhananda Ghiri, Hindu nun and referent for the Italian Hindu Union (UII) began by speaking of how this story of Cain and Abel can be perceived as ssuggestion and as a provocation. Finding a “symbolic similarity” which, without forcing parallels, indicates a possible dialogue. It is the figure of the son of Prajapati which gives birth to the entire living manifestation. “The Bright and the Dark, translated from the Sanskrit. They represent good forces and selfish forces. In Hinduism there is no word for evil. Where we speak of evil we are actually speaking of the affirmation of an individuality against empathy. Say yesWe are all good or bad is a simplification”. For Shuddhananda Ghiri humanity lives in an “aconstant desire to return to one, to the absolute. The duality that characterizes human existence on earth is the same with which fwe face off in a continuous struggle”. Another example of this duality trying to integrate is present in the miti, in scriptures and iconographic representations. “The female figure of Durga, the one who is difficult to destroy, and carries within herself not only the maternal that welcomes, but also the shape of the trident that kills the buffalo, a kind of demon that has the characteristic of changing shape continuously. It symbolically represents our minds and drives. As human beings we are driven to deadly evils, such as dissatisfaction in the micro and macro social cosmos, and this is at the root of the conflict. As stated in the See, we have to recognize this aspect, inside and outside ourselves”. In the tIndian and Hindu roots in particular, explained the nun, there is no word to say “demon”, in a Manichean sense or as an ontological reality. “The Frarola Dharma, in the sense of harmony, common good and justice, has the opposite a-Dharma, in the sense privative. This marks the polarity, such as the one between atraction and repulsion. We mean the dual as a challenge to be overcome in order to achieve unity. This is a concept in which religions can be found ”she concluded Shuddhananda Ghiri. 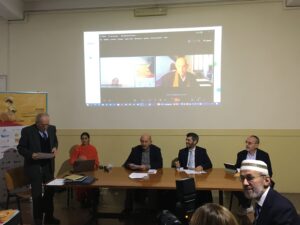 William Doryu Hats of the Anshin Zen Center and member of the Italian Buddhist Union (UBI), connected remotely, reaffirmed the value of the “mschool”. Even in Buddhism there is no term for “evil”, but there is a term indicating unhealthy situations. “To know cdares to do to avoid evil actions – said Doryu Cappelli -, we rely on religions, in search of answers, or precise spiritual ways. As if we wanted to join a club, to have a precise identity and to identify ourselves in certain paths. Also in Buddhism we have Frrecepts, which we try to follow, as in other religions. However, there is nothing so sure and definite. TO Sometimes evil comes from trying to defeat other evil. There is no iabsolute goddess of ‘evil’ and ‘good’. Take the Zen tale of the blue rock, case 41. It says ‘Where the right is the wrong blend together, not even i essays can know it; […] not even the Buddhas can know.[…] He walks on ice subtle And runs on the blade of a sword’. Also in the dn Buddha’s discourses one finds simple aphorisms, such as ‘Stop doing evil, practice good, cultivate good, purify the heart’. Sometimes to do this we have to go against certain indications, togo beyond dichotomies. The pure enters the pathless land in a dimension beyond. But what does it mean?urness? Minimizing bad?” continued Doryu Cappelli, questioning himself on how to avoid absolutizing evil, on how to grasp its impermanence and on how to analyze the interconnections. And she concluded with an invitation to awaken in the exchange of cultures and geographies.

The conference opened with greetings from David Milani (president of the Fondazione Ente dello Spettacolo which organizes the Tertio Millennio Film Fest) and of Julian Savina (director of the Office for Ecumenism and Interreligious Dialogue of the Italian Bishops’ Conference and coordinator of the Interreligious Dialogue Table which promoted the conference and chose the theme of the festival).

Cain and Abel together in us