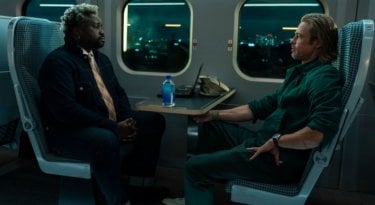 Our review of Bullet Train, an all-star action thriller led by a Brad Pitt in the killer version in an existential crisis, from 25 August to the cinema after opening Locarno 2022.

As ours highlights Bullet Train reviewthe new film starring Brad Pitt embodies the quintessence of pure entertainment devoid of any subtext, a little too empty to satisfy the most refined palates. The film set on a Japanese high-speed train, the pioneering Shinkansen, which unites Tokyo and Kyoto, is a succession of salacious jokes, puns, punches, shots, scuffles and continuous twists. The various chapters of the story, an adaptation of the novel of the same name by Kôtarô Isaka signed by Zak Olkewicz, are marked by the appearance of the various killers at the center of the story, all strictly interpreted by Hollywood stars, whose missions are intertwined on the bullet train.

Bullet Train, directed by former stuntman and John Wick co-creator David Leitch, looks to “tall” models like Guy Ritchie and Quentin Tarantino, all topped off with a hint of Snowpiercer, but grabbing an underlying playful quality that invites the public not to take what they are seeing too seriously. Blood flows freely, knives fly, guns fire, but often the dead are less dead than they appear. Brad Pitt wallows in this festive murder festival that runs on the tracks, providing a fun and relaxed interpretation. His Ladybug is a killer motivated to say goodbye to his work as all the missions, which he carries out brilliantly, are studded with horrible collateral incidents. In the first sequences of the film we find him struggling with his two spiritual guides: Maria, whose voice we hear on the phone, is his employer, but Ladybug always has on her lips the mottos of her therapist who invites him to lay down her weapons to seek inner peace. “Bring peace to the world and you will get peace” it is the teaching that tries to make a skeptic Mary digest.

An amused cast for a puzzle storyline

The two British killers Tangerine (Aaron Taylor-Johnson) and Lemon (Brian Tyree Henry) also travel on the Shinkansen, one white and the other, united by a brotherly bond despite the constant bickering over their plant names that fuel nonsense humor. The duo must return their kidnapped son (Logan Lerman) and a briefcase full of cash to a mala boss – the same briefcase Ladybug is tasked with picking up in a clean, bloodless job, at least on paper. But it is the incipit of the film that puts us in the Japanese setting with the petty criminal Kimura (Andrew Koji) who is in the hospital at the bedside of his son, who was voluntarily pushed off a roof. The child’s grandfather, played by a menacing Hiroyuki Sanada, puts him in front of his responsibilities by forcing him to take revenge on the culprit, who must not go unpunished, and this is the reason that pushes him to get on the bullet train reluctantly on the notes of a cover Japanese of Staying Alive.

The killers also hide under the guise of defenseless schoolgirls: this is the case of Prince, a character played by a Joey King all lipstick, hair bows and miniskirts who is actually the daughter of a fearsome killer, but also the expert on poisons The Hornet (Zazie Beetz in a short but unleashed role) has a say in the murders. On the train there is also room for the feared Russian underworld boss known as White Death with his team of hit men, and there is even a poisonous snake stolen from a zoo that will be the protagonist of a funny curtain with Brad Pitt.

Brad Pitt: The 10 Best Movies by an Academy Award Winner

A train that runs towards nowhere

With a particularly intricate plot, full of twists, surprise appearances and sometimes free flashbacks, Bullet Train is based on the interpretations of a supercast, of which we do not mention all the names so as not to spoil the surprise, and on a disruptive visual style. “Nothing under the surface”, paraphrasing the title of a famous 1980s thriller. David Leitch seems to use the beautiful form and studied shots as a crutch to compensate for the emptiness of the plot. Bullet Train lacks both Tarantino’s citational awareness and Guy Ritchie’s ability to photograph insights into the rough British criminal universe with surreal irony. Indeed, to be honest, the choice to make a story set in Japan their own by grafting an almost entirely Caucasian and international cast to it will make purists turn up their noses. There is very little Japanese in the film beyond the Kimura subplot and some hints of the more kitschy local culture (such as the puppets that can be seen here and there on the train).

The trio made up of Brad Pitt, Aaron Taylor Johnson and Brian Tyree Henry, the latter struggling with a funny London accent, pull the wagon in this ensemble film exploiting irony and stage presence, paving the way for public enjoyment even if not all roles are so centered (Joey King’s lewd schoolgirl and troubled father lack charisma and conviction), but in this mix of murderers who don’t scare anyone, it’s hard to side with someone given the characters’ spooky nature. Those who love the action genre will be content to enjoy evolutions and fights shot with great skill, but also the lively and colorful look of Bullet Train. Those looking for something more will be disappointed to have got on a train that runs as fast as the wind, but does not land at any station.

The Bullet Train review praises the compelling performances of Braad Pitt and the duo of Aaron Taylor Johnson and Brian Tyree Henry who lead a cast of stars in a wild action drama that lacks mannerism. Impeccable sequences and an adrenaline-pumping rhythm for a film with a twisted plot dotted with twists that takes the form of pure divertissement without any subtext.