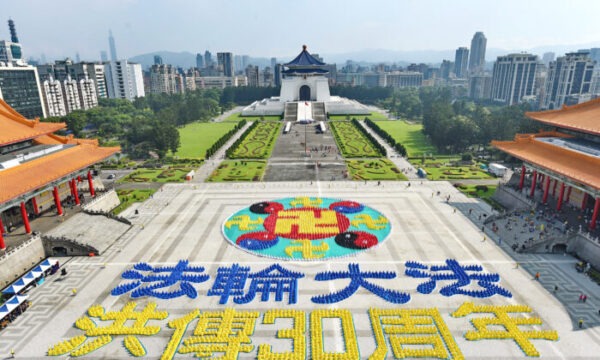 TAIPEI – Liberty Square, an emblematic tourist site of Taiwanwas awash in a sea of ​​color on November 12, when more than 5,000 locals gathered to deliver a message to communist China.

Their message was clear: While the communist regime continues to brutally persecute Falun Gong in China, across the strait in Taiwan, and around the world, millions of people have practiced this spiritual discipline freely for centuries. decades.

Falun Gong, also called Falun Dafa, is an ancient method of refining the body and mind including peaceful meditative exercises; it is based on the universal principle of Truthfulness-Compassion-Forbearance. Since its introduction to China in 1992, the practice has grown in popularity and is estimated to have had between 70 and 100 million practitioners in the country by the end of the 1990s.

But this popularity was seen as a threat by the ruling communist regime, which launched a massive campaign of persecution against Falun Gong practitioners in 1999. According to the Falun Dafa Information Center, millions of practitioners have been detained since then and countless of them have died under torture or as a result of forced organ harvesting.

In the capital of the democratic island of Taiwan on Saturday, local Falun Gong practitioners, dressed in yellow, blue, red, black or white, sat in the square, arranged to form a large version of the practice’s emblem, known as the Falun or Wheel of Law. Under the emblem, people formed a short sentence containing seven gigantic words in traditional Chinese characters. This activity commemorated the 30th anniversary of the introduction of this spiritual practice in China.

Hsiao Sung-shan, professor of engineering at National Ocean University in Taiwan and president of the Falun Dafa Association of Taiwan, said in a speech that the choice to form the emblem had the specific purpose of “to transmit a peaceful, luminous and sacred positive energy” to the society.

“The Emblem Is Very Sacred to Falun Dafa Practitioners”said Mr. Hsaio, adding that practicing the exercises has brought hope to countless people.

He expressed the hope that people who see the character formation – whether they see it in person in Liberty Square or in pictures online – will be tempted to learn more about the practice. According to Sung-shan, more than 100 million people in 114 countries and regions have adopted the practice.

Mr. Sung-shan explained that it was practitioners in China who staged the first such demonstration in 1996, before the regime began to persecute the practice. This tradition lives on in Taiwan today, he added, noting that Taiwanese practitioners have held this character-building activity every year since the year 2000.

“I hope the Chinese Communist Party (CCP) can end the persecution soon, thus allowing China to be like the rest of the world, where people can practice Falun Gong freely.”he added.

To enable the formation of an image, practitioners in Taipei spent three days preparing in Freedom Square. They manually taped thousands of colored rugs to the floor – the rugs serving as the outlines of the performance in a predetermined pattern.

On Saturday, practitioners, grouped according to the color of their attire, entered the square and sat on a mat of the corresponding color.

5,000 #FalunGong practitioners gathered in #Taipei on Sat. to form giant images of an emblem and traditional Chinese characters including #FalunDafa

They were separated into groups based on the color of their clothes. Their message: #Taiwan has freedoms not available in #China pic.twitter.com/27pMbRJxdk

Wu Ching-hsiang, a retired architect who created the character formation plan, told Epoch Times that there are other character-building activities in the world, such as people coming together to save the ocean or protect the environment.

However, according to Ching-hsiang, these activities are on a smaller scale than Taiwan’s annual training.

Epoch Times also collected comments from Huang Chun-mei, the organizer of the activity and vice-president of the Taiwan Falun Dafa Association. She mentioned that the annual activity was well received by many Taiwanese. She cited as an example her daughter’s teacher, who has attended the annual character training and other local Falun Gong activities for years.

For people who are unfamiliar with Falun Gong or who do not understand why so many practitioners remain steadfast in their belief in China despite the persecution, Mr. Ching-hsiang encourages people to read Zhuan Falunthe main book of Falun Gong teachings, and mentions that it has been translated into many languages, including English and French.

#FalunGong practitioners line up and walk to their spots to form giant images at Liberty Square in Taipei on Nov. 12

It was awesome seeing so many people taking part in this annual event in #Taiwan pic.twitter.com/q97eDdz1JL

Freedom Square is a popular weekend hangout spot in Taiwan. Some people go there simply for sightseeing, while others go for a walk or meet there with friends or family.

As the character formation took place, many people gathered nearby and watched the activity. Some took pictures with their cell phones. Among the spectators was a local high school teacher named Chen.

” I am very moved. All these people have chosen to practice the [Falun Gong]. And they can all sit there for a long time, and there’s no mess despite the heat.”Chen told Epoch Timescommenting about Falun Gong practitioners participating in this activity.

Chen added that she knows about the CCP’s persecution of Falun Gong because she subscribes to the Taiwanese edition ofEpoch Times in Chinese language, which informs about it.

She said the world would be a better place if more people were like Falun Gong practitioners. As for herself, she confided that she was in the process of getting to know this spiritual discipline better.

After the character training was completed, the practitioners did the meditation exercises together before leaving the square.

Two of the people involved in forming the image approached Epoch Timesexplaining why they persevere in practicing Falun Gong.

Huang Jeen-dar, 56, deputy director of an IC design company, said he started practicing Falun Gong in late 2004 after reading the Nine Commentaries on the Communist Party, which expose the nature and history of the Chinese communist regime. The Chinese language newspaper Epoch Times published these articles in a series of editorials as early as 2004.

Mr. Huang explained that he finally understood the meaning of life. It’s not about making a lot of money or being defined by your accomplishments alone. He added that life is more about improving character.

Restaurant owner Lin Ge-zhi, 53, has been a practitioner since 2008. After years of following the discipline’s basic principle of Truthfulness-Compassion-Forbearance, he says he has become a better person.

He explained that he previously suffered from allergic rhinitis and often had the seasonal flu, but these physical problems have disappeared since he began to cultivate his character.

“Back then, when I was doing my job, it was more for the money and the fame. I was lost in my life”Mr. Lin said. “Now these things matter less […] I no longer have a bad temper and I have an easy-going personality. »

How can you help us keep you informed?

The Epoch Times is a free and independent media, receiving no public support and not belonging to any political party or financial group. Since our inception, we have faced repeated attacks to silence our information. This is why we count on your support to defend our independent journalism and to continue, thanks to you, to make known the truth.

Over 5,000 people in Taiwan offer a message of hope and perseverance