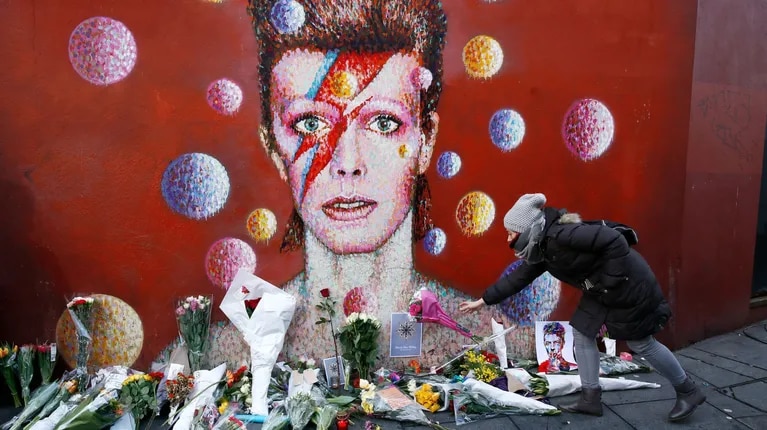 Today, January 10, marks the 7th anniversary of the death of David Robert Jones, known throughout the world as David Bowie. He died in New York, after a cancer that went through in silence. Two days earlier, on his 69th birthday, she had launched his last album. Bowie accepted the diagnosis, but he didn’t waste a second on meaningless questions and enjoying the time he had ahead of him, his affections, and making it clear that cancer was not going to take away any of his art, and he left us his most disturbing work, Blackstar. “I’m not a popstar, I’m a blackstar”It is his final testament.

David Bowie was born as David Robert Jones on January 8, 1947 in Brixton, a working-class neighborhood in south London, which was bombed during World War II, which marked his childhood and which he remembers as gray and dirty England. . He decided to change his last name to avoid possible confusion with another David Jones, singer and actor who, after recording an LP in 1965, would become one of the members of The Monkees under the name of Davy Jones. In 1965 it was renamed Bowie in honor of Jim Bowie, an American adventurer and mercenary.

Also read: The lesser known David Bowie and his path to glory

Like all great artists, his work has been traversed by his obsessions: loneliness, alienation, spirituality, sex, fame, death, the mystery of human communication; but also because of his readings such as Jack Kerouac, Friedrich Nietzsche, William Burroughs; his passion for music, fashion, cinema, plastic arts, psychedelia, punk and also, for his fears. Someone who I needed to absorb everything to engulf it and after incorporating it and making it your own, transform it into something else, new, different and rare at times.

“I am a thief of good taste. The only art that I am going to study is the one that can be stolen”, he declared in the mid-1970s. Agnostic, although he always embraced the practice of tibetan buddhism as a kind of religion: “There is something beyond, God is an energy “. In short, like almost everyone, he was trying to find meaning in his own life and, above all, in his place in the universe.

David Bowie has been one of the great characters in the history of rock and one of the most eclectic and influential figures that popular music has known. He carried himself more like a celebrity than a rock star. He always did what he wanted. defied all conventions in music, in fashion and also in his sexuality: he declared himself gay, then bisexual and finally, “a heterosexual who had come out of the closet”.

He never felt the slavery of having to respond to aesthetic pigeonholes, the music industry or political correctness and he always lived until his last day with a absolute creative freedom, with impressive stagings that changed according to their artistic and musical times at each moment. An avant-garde, who always took risks, and who was inspired by what the only permanent thing is change. The best was always in the future.

In the infinity of times that they interviewed him and asked him the reason for so many beings and alter ego who inhabited it in a chameleonic way (The Mask, Ziggy Stardust, Major Tom, The White Duke) replied: “I’m a collector of personalities”. He was never interested in being part of the rock and roll star system that was always conservative, repetitive and predictable (although he took advantage of it), despite having been treated by the press as a jet setter.

It seemed absurd to him to remain standing in the same place when the world is so big and immeasurable. And perhaps that is his greatest teaching: does it make sense to repeat the same life of the past when there are infinite possible lives to live ahead? His death was not very different from his life: a work of art, conviction, style and invention.

“Beyond the failures, he kept going, making of the search a method. At some point, she looked back to review the journey and after reaffirming her impact, she realized that what was meant by reality were no longer the notions she had grown up with, but rather the questions that no one could answer. Like other artists of his generation, he had succeeded, failed, and reinvented himself many times. He too had been imitated, questioned and ignored. But unlike Paul McCartney or Bob Dylan, his influence was not limited to the development of pop or folk, but included fashion, performance and performance”, writes Juan Rapacioli in Why We Listen to David Bowie – Musical Gourmet, 2020.

His philosophy, his way of seeing the world, could be defined along these lines:

“Religion is for people who are afraid of hell; spirituality is for people who have already been there”, a phrase he said in the ’90s and that appears in the book David Bowie. The man who changed the world, by Wim Hendrikse.

Visited twice Argentinawith two completely different shows: one was on September 29, 1990 at River, with Bryan Adams as opening act, at the close of the Sound + Vision tour and the second, on November 7, 1997, at the Estadio de Ferro where he was the main artist of the Rock & Pop Festival, in both cases with production by Daniel Grinbank.

One of the biggest hits of his career was under pressurea song that was published in Hot Space, by Queen, in 1981. One of the most applauded and celebrated collaborations in the history of music. It was a worldwide sales success, chosen as one of the best songs of the ’80s and one of the most stellar moments of her career and which has many legends about who really composed it. John Deacon, Queen’s bassist, is credited with authoring that catchy bass entry in the song. Deacon himself, in a 1984 interview, said that Mercury had written the vocals.

David Bowie’s biographer, David Buckley, claims that the author of the song was Bowie and that it was originally called People are streets. In the credits, the authorship is in the name of the four members of Queen and Bowie. A song that Queen would never have written without David Bowie and David Bowie would never have performed without Freddie Mercury. Anyway, it was an event. On April 20, 1992, several bands met at Wembley Stadium in London to pay tribute to Freddie Mercury.. David Bowie interpreted with Annie Lennox a magnificent version of Under Pressurebut with a fundamental detail: unlike the version of Hot Spacewho plays the part of Freddie Mercury is Bowie.

Joined in 1996 the rock and roll hall of famepresented by Madonna and David Byrne.

In 2022, the extraordinary was released in cinemas documentary film Moonage Daydream, a true audiovisual spectacle written, directed, produced and edited by Brett Morgen. For its realization, he had access to Bowie’s personal archive, which included an enormous amount of unpublished material and rarities. An amazing journey of images and colors that lives up to Bowie’s work. (In streaming, it can be seen on Apple TV + and on Google TV)

His last public appearance was in December 2015, when he attended the premiere of Lazarusa musical based on his repertoire and directed by Michael C. Hall.

David Bowie: an unrepeatable artist, crossed by his obsessions

Astro: do you live in the right city according to your astrological sign?
Xue Mo will exhibit literary works depicting life in Western China at the Frankfurt Buchmesse 2022
La Pléiade: Charlotte Brontë, a romantic and critical pen
Tweet
Share
Share
Pin