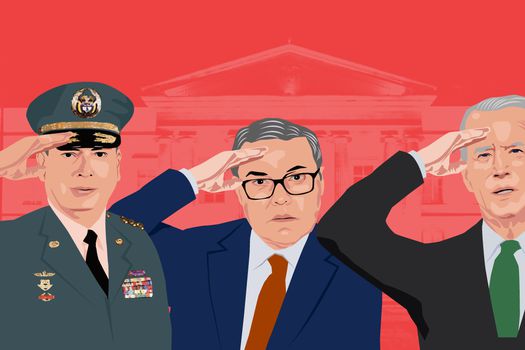 Petro bets hard to carry out its strategy against drugs: it sweeps 52 generals, proposes the decriminalization of micro-trafficking and presses for a new dialogue with the United States.

WARNING: THIS IS FICTION

Here the current situation in Colombia is recreated with imagined situations, invented dialogues and fictitious characters. Just as some movies warn that their plot is “based on real events”, this is a novel based on current events. In other words: don’t get confused. “The presidential candidate” is a caricature of reality, a parody, an exercise in the imagination of the Author. This is one conjunctural fiction novel.

Lorena Agudelo listened in her living room to a podcast of «Guided meditation to make decisions». The chirping of some birds set the relaxing music, although she did not find accommodation in the lotus position. Her pain in her knees indicated lack of flexibility in her hips and her discomfort prevented him from concentrating on her directions:

Breathe again… Now you are going to think about that situation that has you fearful, unstable and with doubts. Think about those thoughts that do not let you make the decision to do or feel something. What is it that puts you in conflict? Why are your desire to decide canceled?

His cell phone began to vibrate. It was a relief for her to stop her tortuous attempt at spirituality.

-Hello. I won’t be interrupting anything.

-No way. I’m more deprogrammed… I’m the cliché of the recently unemployed; looking sporty, apparently trying to meditate, exercising, eating healthy. Laugh at what I had for breakfast today: whole wheat toast with avocado. No, queer… I’m already hungry that I wouldn’t wish on anyone.

—Take advantage because later you won’t have time for such a healthy life.

—You already know that the boss puts you where you say, except in the Presidency. Veronica said again that she didn’t want to see you there, not even in painting.

—Hey, but how about that lady. As Shakira says: “You can’t live with so much poison.” I mean… the one who overdid it with the “Gran Reserva” was Petro, but I’m to blame.

“We knew this was going to happen. It was part of the plan, he remembered.

—Yes, Nico, but I still feel like… rage. Why did I have to immolate myself?

—The idea is that we continue working on key.

“But from where?” I don’t see it so clearly.

“That’s why it’s a good idea to wait.” There is no desire for anything. Really, take advantage of these days to do other things.

-Do what? To meditate? The knees do not give me.

“No wonder your knees hurt.” It means you have a hard time kneeling.

—Jum… Well, with the boss I live on my knees.

The Candidate entered the President’s office. Gustavo Petro still looked awkward in that office, not sure where to sit or where to invite the others to take a seat. They spoke standing up.

—In the end, how many generals are the ones who come out with the change of leadership? asked the head of state.

“Fifty-two,” the woman replied, hiding the pleasure she felt in saying it out loud.

“Not enough. It is the biggest tremor in the history of Colombia.

—Half a hundred generals… Suddenly we have to take it more calmly.

The Candidate remained silent, waiting for Petro to clarify his doubts by himself. When she sensed that she was leaning towards reversing what had been agreed, the woman beat her to it.

—Changes are made by changing people. And the bigger the change… the more people have to be relieved. What you want is not just any adjustment. It is a transformation of enormous complexity, which does not fit in the heads of the generals who are today. Imagine: putting them to measure their results in terms of lives saved and not in terms of casualties. It is absolute madness for them. We have already done the analysis.

“We can try to convince them.

“We can try, yes.” But, are we going to achieve it?… I understand the moment of doubt, because it is a historic change in the generalship, but that is what this Government is about, right? To make historic changes. It is no small thing to go from the “concept of democratic security” to the concept of “human security”. We already discussed it. You can’t make a security policy to preserve lives with the generals who rose privileging death. They could sabotage everything.

“And the colonels don’t?”

“Colonels have a very strong reason to listen to whatever you say: they have the possibility of promotion ahead of them.” We cleared the way for them by taking out an entire generation of generals. If that’s not an incentive…

Petro nodded and crossed his arms. A while ago he wanted to share a reflection with the Candidate.

“I’ve thought a lot about what happened to you, to your son… What was his name?”

The woman held her breath.

—The full weight of the law fell on Camilo, the full force of the judicial apparatus of the United States. An absurd and disproportionate thing for… a child almost… someone who was a weak link and, perhaps, circumstantial. I understand that what he was carrying was a small amount of drugs.

The Candidate was torn between allowing the conversation to proceed or stopping it in its tracks. Petro continued:

—What all this change of focus is about is saving lives, like your son’s; that the public force and the justice system focus more on punishing the business and less on people. It cannot be that a State uses all its muscle against young boys who, by chance or by… clumsiness, sell some small quantity of drugs. It cannot be neither that nor that we continue persecuting peasants who cultivate coca leaves; much less young people who smoke a bar in the street. That is why I have begun to involve you in these conversations, because of your personal sensitivity to the subject.

—You said that the idea is to punish the business more and the people less. What have you thought?

—I have thought that nothing hurts drug trafficking as much as a large shipment that falls when it is already leaving the country. Imagine the blow; what they spend in time and resources, protecting the crops, processing the coca, transporting it internally, so that, at the end of all the effort, we seize the drug from them. We don’t just hurt their business. If we focus military operations on the borders, by sea and air, we are also going to remove a good part of the conflict from the streets and the countryside.

(Hear President Petro here about the strategy they are contemplating).

The Presidential Guard Battalion entered the Plaza de Armas playing their shrill trumpets and bombastic drums. The soldiers were especially encouraged by have public againpassers-by who could now see them from the reopening of Plaza Núñez.

Through her window, the Candidate watched the warband with a slightly contorted face, uncomfortable at what she considered unnecessary noise. Her office was a tiny but privileged space that went unnoticed, right between the first lady’s office and the General Secretariat. Those offices, and the president’s, were the only ones on the second floor of the Casa de Nariño with a view of the Plaza de Armas.

“That story of stomach ache was it your idea? Nicholas asked.

The Candidate shook her head.

“This time I had absolutely nothing to do, not even with the absence of the president nor with the lies that exposed him. It is possible that this Government does not need us to sabotage itself in a big way.

—This is the second time that Petro has disappeared from the map in just 15 days. If we plan a third well, it can be an important thrust.

The woman, who was still looking out the window, changed the subject.

“Do you know what Petro said to the Minister of Justice?”

“Hmm… What about?” decriminalize some conduct?

—Yes, exactly… We are going to work on a bill. The idea is, among many other things, decriminalize microtrafficking.

Nicolás understood perfectly that his boss was thinking of Camilo, the second chance his son would have had if such a law had protected him in the United States.

“And then?… What is to be done?” Nicholas asked.

—Well… First, we must prevent the president from continuing to “disappear”. And second… if he really is betting on a change in anti-drug policy, the one we should talk to the most is the United States government.