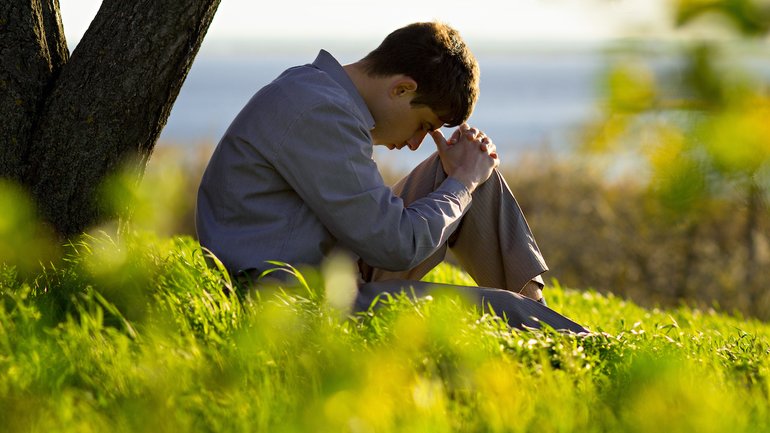 We have in many chronicles studied the acts of faith of the women and men of the Bible. I would like to end this series with the testimony of a young man born in the last century who reminds us that God is the same yesterday, today and forever.

It is the story of a 14-year-old teenager who has just been told that his grandfather, a hero of the great war, had been faithful all his life to a motto that he repeated constantly:

This young man, alone in his room, said to himself that he too should have a motto to keep all his life, as his grandfather, whom he admired so much, had done before him.

He found this maxim in his heart and he wrote it in large letters on the first page of a private notebook of which adolescents have the secret:

For him, who had only a very vague knowledge of God, there was no real spiritual connotation, it was intuitive, an act of faith.

But God saw and heard him.

A few years later, the young man is 20 years old. He is alone on a beach where he works to pay for his studies. It is evening, the beach is deserted, he is reading a Bible offered by a friend who will later become his wife.

By reading the Sermon on the Mount of the Gospel of Matthew, he discovers Jesus Christ, his love, his goodness, his greatness. At that very moment he decides to give her his life.

A year later, in a deep moment of meditation on the Word of God, he read a passage from the prophet Isaiah which he took as a promise that God addressed to him. He reads :

“The Lord will always be your guide, he will satisfy your soul in the arid places, he will restore vigor to your limbs, you will be like a garden watered like a spring whose waters do not dry up”.

The Word of God is alive and effective sharper than any two-edged sword. At that moment, the biblical text is a living word of God which penetrates into his heart and is inscribed as a covenant between God and himself, a promise that the Eternal wants to make to all his children.

48 years later, he is a married man, father and grandfather of numerous grandchildren.

The Lord blessed him all his life down to the smallest details, in the joys and in the sorrows, in the successes and in the trials which however were not lacking.

Today he bears witness to his faith and constantly proclaims:

I believe that God is alive. He is the only true God and Jesus Christ is my saviour.

I believe He is almighty, He is sovereign and nothing escapes Him

I believe He does everything wonderfully, that He is full of loving kindness and compassion for those He loves.

I believe that He does everything for a purpose and that everything works for the good of those who love God.

I believe He is just and He will reward everyone according to their works.

This text is the property of TopChrétien. Distribution authorization authorized by specifying the source. © 2022 – www.topchretien.com