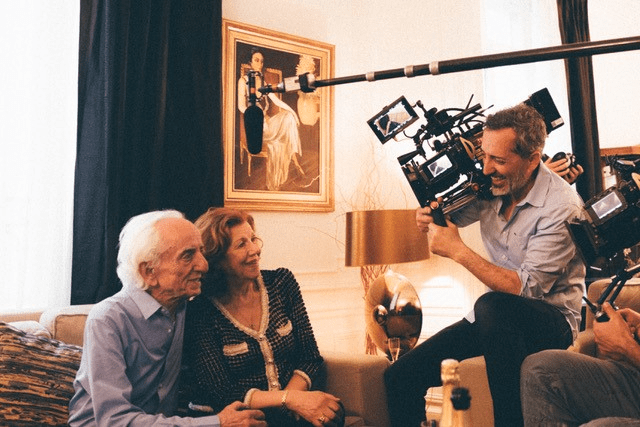 Comedian, actor and director, Gad Elmaleh returns to the cinema on November 16 with “Reste un peu”, a very personal film depicting his spiritual journey with humor and delicacy. A great opportunity for Aleteia to meet him.

“The conversion of Gad Elmaleh”, “Gad Elmaleh on the way to baptism”, “Why does Gad Elmaleh want to become a Catholic? “… These titles, what media did not want to release them by putting end to end all the signals sent by Gad Elmaleh suggesting a real spiritual journey. The comedian, actor and director first financed the musical Bernadette de Lourdes in 2017 and then went to the Marian city himself. He also attended the canonization of Charles de Foucauld in Rome in May 2022 before going to the sanctuary of Paray-le-Monial during the summer. At the start of the school year, the humorist decided to take theology courses at the Collège des Bernardins.

So, the announcement of the release of his new film, Stay a bit November 16, had its small effect. What is it about ? We see him suddenly land in France with his parents – who play their own roles – after three years in the United States. All the way to battle among the latter who give him a welcome worthy of the prodigal son. Although very happy to see them again, it is for a completely different reason that Gad returned: his baptism. “It is clear that those expecting to have “Chouchou 5” or “Coco 4″, will be disappointed because this new film is not quite in that vein! “, Gad Elmaleh announces from the outset when we meet him at the end of October in a hotel in the 16th arrondissement. “But it’s still a comedy. Faith, spirituality, worship, identity… All these questions should not prevent us from laughing, quite the contrary! To laugh not at faith or religion, but with religion, creating a bridge between communities. With humor and delicacy, Gad Elmaleh lifts a corner of the veil on his faith. Or, should we say, simply what he believes in. “It’s a fairly autobiographical film,” he continues. “There are true things, things that are not true, but I won’t tell you which ones,” he laughs. ” It’s for you to guess ! »

Aleteia: We discovered you in “The truth if I lie”, “Chouchou”, “Coco”, in your many shows, we laughed a lot… And nothing could suggest that your last film, “Reste un peu”, relate to your spiritual journey. How did you come up with the idea?
Gad Elmaleh : You mention films that I love, that I’m very proud to have made. I come from comedy, I even come from comic film. It’s a genre, an exercise that I like and that suits me, this language is in my DNA. But I also want, today, to do more personal things. “Stay a bit” is an example.

What is the part of autobiography and fiction in this film?
My shows are autobiographical. When I start writing, it’s often drawn from something lived. For “Reste un peu”, we are in a genre bordering on docu-fiction. There are even questions that I cannot answer since this film is autobiographical and to reveal things about my life and my spirituality is to reveal things about the film and the end of the film. There are true things, things not true but I will not tell you which ones. It’s up to you to guess by going to see the film! To give you an answer anyway, reality has been pulled, fictionalized and scripted into a movie. But the starting point of the film is totally true.

What is this starting point of everything?
My sister, who therefore plays the role of my sister in the film (all the characters in the film are played by the real characters in life, editor’s note), tells the story of this time when I was 6 years old in Casablanca and where I entered a church when it was strictly forbidden. I come from and was raised in a traditional, traditionalist Sephardic Jewish family and we were forbidden to enter a church. That day, in this church in Casablanca, I had a tender, gentle encounter with the Virgin Mary. A luminous encounter. Let’s be honest, if I first entered this church it was precisely because I had no right! But I hadn’t anticipated what was going to happen next: this representation of the Virgin Mary, this gentleness, this light… And I then said to myself: “It’s not bad, we’re good here! ” It all started from there.

The Virgin Mary is the real heroine of my film, no offense to my mother!

Between the young 6-year-old Gad and today’s Gad, time has passed…
This meeting at 6 years old with the representation of Marie is true, she accompanied me. When I tell you that I come from a Sephardic Jewish family, I also come from the study. Very early and very young I was in contact with spirituality, commentaries on the Torah, the Talmud. The perception of what I live today is therefore necessarily sharpened by my education. It accompanied me. My coming to Lourdes in 2018 was another trigger in my relationship with Marie, as were the people I was able to chat with. The exchanges I had with Jews and Christians when I was in Lourdes only reinforced my fascination for Mary! I was going to say for this character but it’s not a character, she’s the real heroine of my film, whether my mother likes it or not!

Could “stay a bit” come as a surprise to some?
“Rest a bit” is a surprising film. I am aware of this and I am aware that this may destabilize some people who have followed me so far. Those who expect to see “Chouchou 5” or “Coco 4”, which are films that I like, will be disappointed because it is not in that vein. But it remains a comedy, it is important to say that we laugh during this film. Faith, spirituality, worship, identity… All these questions do not prevent us from laughing. To laugh not at faith or religion, but with religion, creating a bridge between communities. This is my fight. I want to create a bridge with the background of our values, not just for form.

What would you like your film to produce in people?
What I would like, what I hope in any case, is that it makes people talk to each other, that the communities talk to each other. I would also like it to make us reflect, together, on the presence of spirituality in our lives. We have the right, and I even believe the duty, to instil this idea of ​​spirituality, with or without God, do what you want! Because in spirituality there is the spirit, that too hear it as you want!

I realized that the catechumenate was a way of life.

Did something challenge you?
I hallucinated on the course of life! From the moment you come back with an open mind, an available heart, there is nothing that corresponds to what you know you imagined. These are people who are on a quest. They don’t know it yet but they are not in a process to ask for baptism but to ask for a starting point. Baptism is not enough! It’s not an accomplishment, a result, it’s a path, a starting point: what are you going to do with this baptism? It is the path that is important. Hearing the person in charge of the catechumenate, I realized that it was a way of life. The catechumenate is not there to have baptism at Easter! It is a responsibility. A questioning that begins once they receive it. It’s Talmudic after all.

Was there a meeting that particularly marked you?
Many same! But to give you one, I met Sister Catherine in Lourdes (nun of the community of the Beatitudes who also plays her own role in the film, editor’s note). It has a truth, a strength, a purity that taught me a lot! Sister Catherine is my little spiritual, friendly, brotherly crush! It’s interesting, moreover, in the film there are two sisters, Sister Catherine and my sister. Two unconditional loves: that of my sister who sanctions, who judges even if there is an opening and that of Sister Catherine who asks to accompany me.

What is your image of theEcatholic church? What is going to please in this religion?
The clothes, the scenography, the staging, the liturgy… I am touched by a lot of things! It already comes from people, people I meet. I am not an envoy from the Vatican but a mere observer. When I am told that I show and film Catholicism with benevolence and light, it is in fact the consequence of what I found myself going through. I say it jokingly in my shows, but there is beauty, goodness, fairness and light in Catholicism. We may not see it anymore – or at least less – when we were raised in it. When we are outside we can perhaps better understand the emotion! For example, when I see people taking Communion I find it upsetting. There is a fascination for a form of solemnity even if it is organised, but if it is staged, which many Catholics criticize by the way. But I like it. That said, Catholics are great at self-deprecation! Me when I see the Church I see Light. Where there is light, I go towards the light.

I would like to cross-read the psalms with artists of different faiths.

A word of Jesus that particularly marks you?
I want to talk about Saint Augustine for several reasons. The idea and the notion of “I believe in order to understand” and not “I understand in order to believe” speaks to me a lot, whatever the religion and faith. I have friends who often tell me: “If I don’t understand, you can tell me what you want, I won’t believe it. But I want to answer them: “If you believe, you’ll understand!” And I believe in that. Do it and you will understand later. It is Moses and the people who lose confidence! They’re following a guy, he’s been dragging them through the desert for years… Do it and you’ll understand later. And you will hear. These are words that speak to me on a daily basis. And then I also think of Charles de Foucauld. He speaks directly to God and asks him to make him discover Him. His prayer of surrender is overwhelming.

What do you imagine after “Rest a bit”?
For now it’s such an important film for me because it tells, represents, signifies and sends a message that I don’t think of anything else. But when I talk about Charles de Foucauld, he fascinates me. I wish I could read it, pass it on and share it. And the psalms of course. These are the same texts for Jews and Catholics. I would like to cross-read the psalms with artists of different faiths. I want to continue to be in these projects because they are in my daily life, in my life. And continue to study, to read, to learn, to understand and to reach out to others.

[VIDÉO] Gad Elmaleh: “The catechumenate is a spiritual martial art”