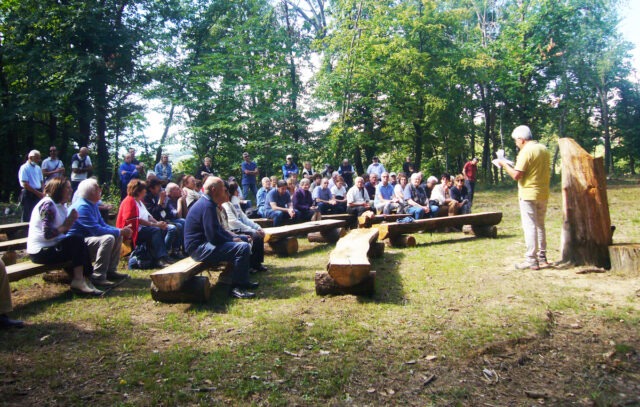 “Let us ask the Lord for thoughts of peace and pray so that we do not disperse strong symbols present in our homes, schools and in the work and living environments”.

These are some of the words spoken by Don Riccardo Camellini at the celebration of Holy Mass in the Abbey of Marola which, after a moment of welcoming the participants, introduced, on Saturday 10 September, in the sign of friendship, the first “Feast of adoptions” chestnut trees, present in the adjacent chestnut grove. Immediately after all immersed in the “external abbey”, the chestnut grove, as the new President of the Association, Lauro Bolognesi, wanted to call it, underlining the goal of redevelopment and enhancement of the same as also a place of the spirit, on the line traced by Pope Francis in Laudato Sì. Place of hospitality, welcome, spirituality and prayer.

The President clearly outlined, in his initial greeting, the idea and the projects that followed, first of all the one that led to the establishment (with the active contribution of Dr. Umberto Bernardi) of the Consortium Society, the operational arm of the Association Amici del Castagneto Matildico di Marola, thanks to which it was possible to obtain funds to redevelop already 22 hectares of wood and carry out pruning for 100 chestnut trees. This was followed by information on the agreements already in place with the Diocesan Missionary Center (to manage the traditional chestnut harvest in Marola), the agreement with Eco Sapiens (a group of the l’Ovile social cooperative with the mission “we educate by nature, through nature, in the middle of nature ”which accompanies school groups of the first and second cycle in the Matilde wood), the agreement with the Nelson Mandela Institute of Castelnovo Monti (which proposes outdoor educational projects and workshops for the upper secondary cycle).

All this is already being done but there will be paths accessible for the disabled, also in collaboration with the “During and after Us” Association and projects on thematic areas ranging from theater to music, from storytelling to art. A wood – garden where you can act and work and where metati (ancient chestnut drying rooms) will be recovered, where the pasture comes back to life to ensure the survival of the chestnut grove and bring it back to natural conditions, according to old forest management techniques.

The main resources for this extensive design come largely from the project Adopt a chestnut, which started in 2020 which has already seen 70 chestnut trees adopted by sponsor companies but above all by private individuals and also the resource of 5 per thousand. But it is to human resources that the President has addressed with gratitude, underlining the generosity of many that has allowed to lay the foundations of a “house founded on rock”: the Association and its members who grow more and more with the will to defend nature, the beauty of creation as “resources for one’s own well-being and that of the community”.

Many actors in this project: the Diocese of Reggio Emilia, the Seminary with its Abbey indivisible from the wood, Monsignor Eleuterio Agostini and Lorenzo Giberti who gave a huge contribution, the current members and the Board of Directors, the Consortium Society with its President Massimiliano Gibertini, Marco Picciati competent and active agrotechnician, the municipal administration of Carpineti, the Benassi company that took care of the cleaning of the forest. All the sponsoring companies were thanked for their generous contribution: the Cooperative l’Ovile with Ecosapiens, the Cantine Riunite, Bertoni Carni di Marola, the Osteria al Portico and Dina Market in Marola, the Chimar company from Modena, the Lambrusco Consortium Reggiano, the Lions of Castelnovo Monti.

A special thanks went to CSV (Centro Servizi Volontariato di Reggio Emilia represented by Umberto Bedogni) to which the Association has named a chestnut tree in gratitude for the support and coaching work for the numerous bureaucratic procedures and hospitality. But the most engaging part of the day was the personal delivery, by the President and the Secretary Nemesio Gherpelli, of the parchments in memory of the adoptions made by the “company of adopters”, sitting on benches made from recycled logs, a gift from the wood and the industriousness of the volunteers, in a natural amphitheater that will lend itself well to other initiatives.

This was followed by the reading of the names of the adopters of a chestnut tree, present and absent, whose names will be displayed in a table placed on the bulletin board at the entrance to the chestnut grove, year by year and in order of adoption. It is not possible here to recall all the names of the generous adopters for which I want to mention only a few particularly significant adoptions: that of two grandparents to their three grandchildren (like them others, including their children) and that of Don Pasquino Borghi’s friends to Don Pasquino, but also to Don Francesco Milani, column of the seminary, and to Don Creardo Cabrioni, who recently passed away.

Many adoptions in memory of a husband, a brother, a sister, a friend, forever remembered in a common house founded on the rock: the chestnut grove, one of the oldest in the Apennines, where the tradition of chestnut cultivation was born, where they live centuries-old and even ultra-centuries-old chestnut trees that have nourished the population for centuries and that continue to do so. Forest abandoned for over 40 years, which has become a disordered forest with the growth of weeds, 15,000 quintals of dry material taken away in two years, chestnut grove which also requires periodic maintenance, not financed by a public body and which now returns to live in its beauty.