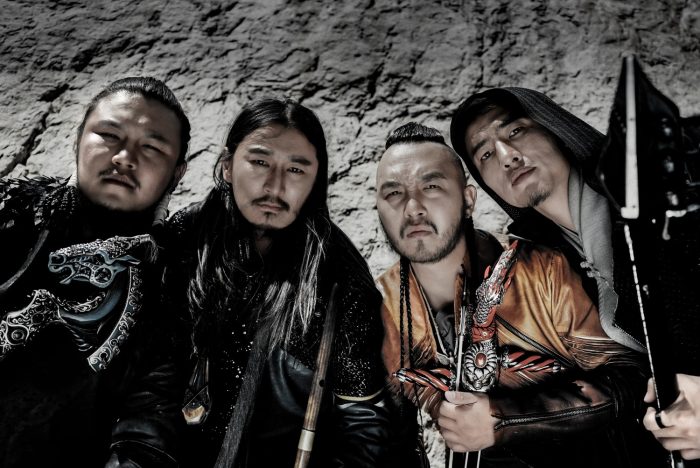 They are certainly one of the most talked about bands of recent times, both for their geographical origin – Mongolia – and for the particularity of their sound proposal, but also for their countless collaborations, from Metallica to video games (with “Star Wars – Jedi: Fallen Order “). Over the course of a few years, The Hu has made inroads into the hearts of many people, even outside the metal environment, due to their very particular music defined by themselves as ‘hunnu rock’, a well-chosen mixture of riffs, baritone voices and traditional music. Mongolian. Three years after their debut, the band’s second studio rehearsal came out, “Rumble Of Thunder”; we took the opportunity to chat with Galbadrakh Tsendbaatar (Gala for friends), singer and founder of the Mongolian formation. Directly from the tour bus that takes the group on tour with Five Finger Death Punch and Megadeth – and with the precious support of an interpreter who translated the questions from English to Mongolian and vice versa for the answers – the oriental musician took us to a journey through the steppes and uncontaminated nature, on the trail of ancient warrior peoples.

HELLO GALA AND WELCOME TO METALITALIA.COM. SINCE IT IS THE FIRST TIME WE INTERVIEW YOU WOULD YOU LIKE TO TELL OUR READERS HOW THE BAND WAS BORN AND IN PARTICULAR WHAT DOES YOUR NAME MEAN?
– Well obviously we live in Mongolia and, when we were formed, our first goal was to make our traditional music known outside our country. The word ‘Hu’ is the heart of the definition of ‘human being’: it is a term used a lot in ancient Mongolia also from a philosophical point of view, as what defines the intellect of human beings. The project is based on hunnu rock, a genre that was actually born about ten years ago thanks to the work of Dashka Production, with whom we publish the records today, which has included in its catalog several bands that play mixing heavy metal , hard rock and the traditional music of our country.

LET’S COME TO YOUR LATEST WORK, “RUMBLE OF THUNDER”. WHAT ARE THE MAIN DIFFERENCES BETWEEN THIS NEW RECORD AND “THE GEREG”?
– “Rumble of Thunder” is not only another record hunnu rock: when we chose the title we looked for something that meant ‘touching the hearts and souls’ of our fans. We wanted a title that would recall, through the fusion of rock and tradition, the fact that music goes to the roots of people’s souls: the ‘roar of thunder’ is because we try, like lightning, to immediately touch those strings!

LISTENING TO IT WE HAD THE FEELING THAT IT IS A MORE DIRECT RECORD THAN THE FIRST, WHICH WAS VERY FOCUSED ON SPIRITUALITY AND ON THE RELATIONSHIP BETWEEN MAN AND NATURE. IS THAT SO?
– Actually our goal when we write the songs is first to make people understand that you have to be proud of your cultural roots. When we composed “Rumble of Thunder” we wanted it to be clear, in our playing, our approach of respect for nature, for our ancestors and our family. It doesn’t matter where in the world a fan of ours is now or what they are thinking: what we want is to tell stories through our music and possibly excite people, making them feel close to each other and giving courage in difficult moments of their life. If we manage to achieve these goals we can feel satisfied, both as a performer and as a musician.

ABOUT THIS ‘INTERCONNECTION’: WE LIVE IN A WORLD WHERE NATURE IS OFTEN DESTRUCTED IN THE NAME OF PROGRESS. DO YOU THINK THAT YOUR MUSIC CAN BRING PEOPLE BACK TO A TIME WHERE SPIRITUALITY WAS AT THE CENTER OF EVERYTHING, BASED ON THE RELATIONSHIP BETWEEN MAN AND NATURE?
– What we are trying to tell people is to try to live your life also thinking about these issues: there are many unexplored places in Mongolia, where literally no one has ever set foot and where it is even forbidden to enter. With some of our songs we really tried to get the message across to respect nature as it is, to leave it like that without trying to alter it and preserve it as best we can. Wherever we go we always try to deliver a message about protecting our planet, and it’s a message that the second disc is deeply charged with.

A QUESTION INSTEAD ABOUT YOUR FANS: IN THE LAST YEARS, ALSO COMPLICE TO THE PANDEMIC, WE HAVE SEEN LESS YOUNG PEOPLE AT THE CONCERTS. MAYBE RE-CONNECTING TO TRADITIONAL SONGS IS A WAY TO ATTRACT NEW SPECTATORS? OR HAS METAL BECOME AN ELDERLY MUSIC?
– Actually our music is aimed at all ages! Of course, we have noticed that there are many people at our concerts of different ages: from teenagers to over 70! However, what I can say is that we don’t focus much on a specific age group: as I said before we try to touch strings that we believe everyone has in their hearts.

LET’S TALK FOR A MOMENT ABOUT YOUR COLLABORATIONS: FROM THE “STAR WARS” SAGA WITH THE “JEDI: FALLEN ORDER” VIDEO GAME TO METALLICA WITH THE “THROUGH THE NEVER” COVER. WAS THE VIDEO GAME HOUSES AND THE LABELS CALLING YOU OR DID YOU PROPOSE YOURSELF AND HAVE BEEN LISTENED?
– The credit goes to Better Noise: it was they who played our songs at EA and Metallica and made real partnership contracts for us. It all started when we played “Wolf Totem” in front of the producers of “Jedi: Fallen Order”: they were so impressed that they absolutely wanted our piece in the video game! For us who are hardened players and lovers of “Star Wars” it was like a daydream, also because we find that our music goes well with the atmosphere of the game. As for Metallica we recorded the cover of “Through The Never” in our style and it happened that they listened to it, from there they first noticed our cover of “Sad But True” with the original video that made them crazy . In short, they got in touch directly with our manager to include the first of the two pieces in the cover disc of the “Black Album” entitled “Metallica Blacklist”. Everything that has happened in recent years has been a little thanks to our music and a lot thanks to our label: we can’t wait to be able to collaborate again on the soundtracks of other video games!

BUT WHAT ARE YOUR MAIN INFLUENCES IN THE ROCK AND METAL FIELD?
– As a professional musician I would tell you that we are basically influenced by everything, but if I have to look at the teenager inside me I would tell you that the thing we grew up with is the 90s scene: Pantera, Sepultura, of course Metallica, but also bands like i Linkin Park! Yes, the list is very long, but we really owe a lot to that scene!

COMING TODAY: YOU ARE DEPARTING FOR THE TOUR WITH MEGADETH AND FIVE FINGER DEATH PUNCH, HOW DO YOU FEEL ABOUT IT?
– Actually we are already on the tour bus and I am doing the interview from my cabin! However we have played a few times and I can already say that it will be beautiful from start to finish, as well as for the caliber of the other two bands we play with also because it is nice to finally see people with our t-shirts or our pins in the audience! We also did meet & greet and it was fun to meet many of our fans for the first time. The nice thing is that after the concerts people often came to compliment us who had no idea of ​​our existence and who, even if they did not understand what language we were singing in, between one song and the next shouted “The Hu! The Hu! “. If you have the opportunity to come and visit us, we are waiting for you with open arms!

WE WANTED TO ASK YOU A COUPLE OF QUESTIONS ABOUT THE DATE IN MILAN: IN PRIMIS, IT’S A HEADLINER DATE! HOW DO YOU FEEL AT THE IDEA OF PLAYING YOUR SONGS FOR AN HOUR AND A HALF OR MORE ONLY?
– Until recently we had always played support on big arena tours, like this one with Megadeth and Five Finger Death Punch. We actually had a headlining date in Santa Cruz just yesterday! We played an hour and a half and it was great: the fans kept asking us for more and we were never tired, as you can see from my face I’m so relaxed today (laughs, because in reality it seems quite tried, ed)!

WHAT CAN WE EXPECT FROM YOUR CONCERT? WILL YOU BRING A SCENOGRAPH AND YOUR TRADITIONAL COSTUMES?
– Well, this is the first time we play in Italy! We were supposed to do the concert in March with Sabaton and Lordi but it was postponed for reasons we know well, like the pandemic. Meanwhile, I think it will be very nice to bring the songs of the second album live, so we will make a nice balanced lineup between the two discs so as not to upset anyone! We look forward to meeting you.

THE HU – The spirit of lightning