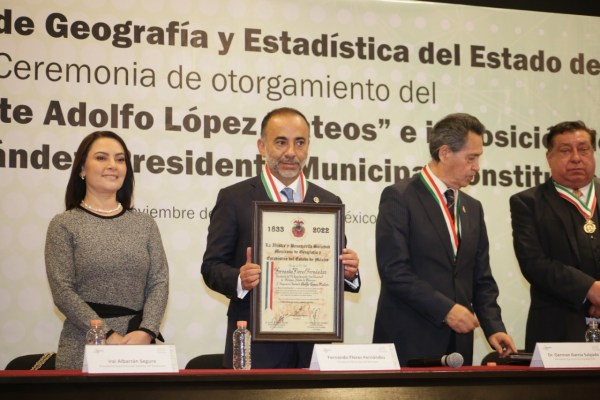 In solemn session, the Mexican Society of Geography and Statistics of the State of Mexico (SOMEGEM), awarded the Parchment of Merit “President Adolfo López Mateos” and the imposition of Venera de Honor to the mayor of Metepec, Fernando Flores Fernández, who was accompanied by the honorary president of the DIF Municipal System, Iraí Albarrán Segura.

The ceremony that was held in the auditorium of the Museo del Barro, the president of SOMEGEM, Germán García Salgado, as representative of the spirituality of the institution of all the states of the country and that evaluates society and the contribution of the and the citizens, of the Mexicans, recognized the history of Metepec and highlighted the actions, work, dedication, commitment to his people, results and above all, the human quality of Fernando Flores, who is an example of the democratic exercise that must be replicated in the world; merit of excellent administration.

«SOMEGEM, is a study institution that upholds good behavior, which in 1924 the government of the Republic declared it Illustrious and Benemérita, where the most renowned Mexicans have contributed to the life of Mexico; among them, José Vasconcelos, Benito Juárez, Adolfo López Mateos, Ruíz Castañeda and more than 11,000 people from Mexico who have contributed to the growth and development of the country with fraternity practicing humanism”.

Of that size is the recognition of Flores Fernández, for his integrity and successful role at the head of a city council that glimpses prosperity for Metepec, said Germán García Salgado.

On behalf of the more than 2,400 municipalities and 32 states of the country, “we come to recognize Fernando Flores.”

The distinguished municipe, is considered by SOMEGEM, among the most influential businessmen in the country, author of books and philanthropist, the field of technology is his banner, all achievements that translated into programs of high social benefit for the Metepequense population such as Social Basket Food Happy Families, Proximity Police, Doctor in your House, to name a few.

The banner that has been delivered since 1868, was imposed on the municipal president, in the midst of a loud ovation from the respectable people gathered in the auditorium to its maximum capacity.

Once taken and respective surrender of protest to the mayor as full and honorary Member of SOMEGEM, as well as the placement of insignia, Fernando Flores Fernández, stressed the importance of the fact as a collective achievement to work in favor of Metepec that shines again today and that the teachings of a young man translate into tangible results, something that could not happen without the love that this municipality has.

“Not only is it enough to have master’s degrees and want to do things, for the first time as citizens we take the reins to optimize resources and time, an administration based on results with the axis of action: people and not politicians,” added the mayor.

Transforming the lives of citizens is what we have been doing in this first year of government and we are going for more, thus concluded the award-winning mayor, Fernando Flores Fernández.