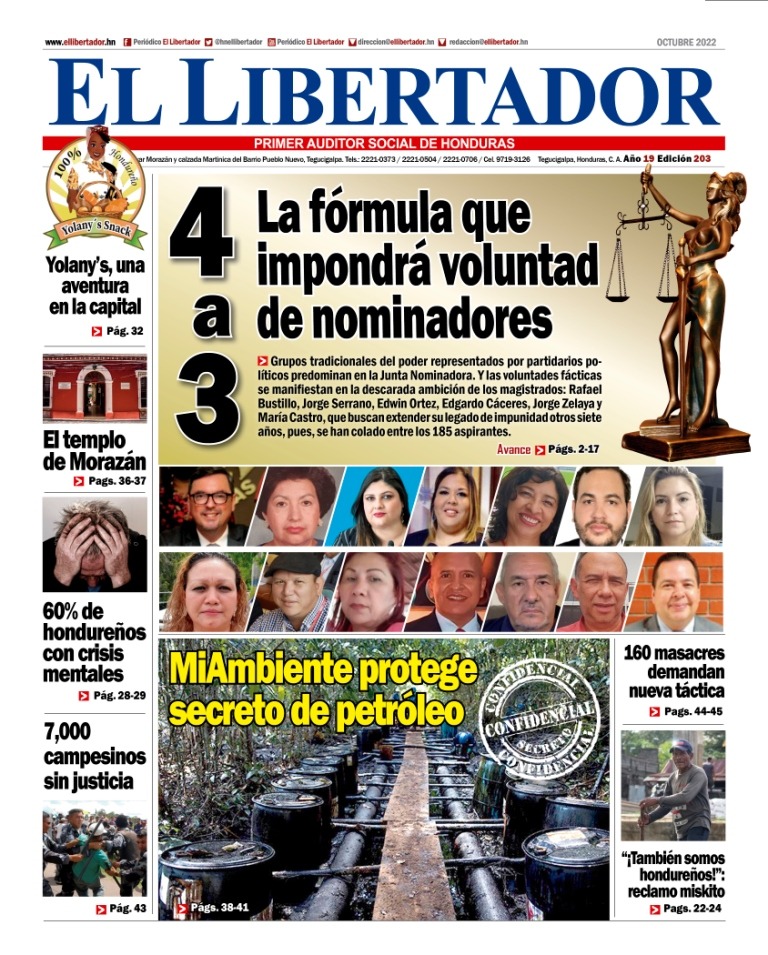 The genetic diversity interwoven by generations has created in the Honduran a well-endowed natural species, with little prominence in the most complex sciences and arts.- The challenge of the Honduran is mental, to conceive spirituality as an inner ally of intelligence and human freedom as lifestyle.- The Honduran as a society carries the soul of a slave, tied by 500 years of foreign colony, but the chain shines brighter in those power groups that, even with capital and political influence, attack the national interest in defense of the United States. .as the top in their spheres of interest.

Classical language called every man who served domestic. And it was fair.- The habit of servitude brings with it feelings of domesticity, in the king’s lackeys as well as in the towns.- In Honduras, the voluntary serfs – businessmen and officials – do not flinch to take the money of the citizens who betray, they think with an obtuse mind, hoping to destroy the country to please the US and the lords who impose their power and the law of impunity in this land of Hibueras.

Five centuries of slavery, submission and dominance in the Honduran people can only be overcome -by a little- with a similar period of incessant evolution that fertilizes a new human being and a Nation that cultivates lofty goals of dignity, self-awareness and its challenges. , thoughts of greatness, freedom and full happiness.- During these 500 years the servitude mentalities of the current man and woman who travel through our territory have been adjusted, the best proof is the national anthem that adjectives as audacious and elevates hero in the album of primary education to the invader of Spain, murderer and thief.

The feeling of pride is on the agenda of the new generations, the dignity of feeling Honduran, the glory of inheriting the libertarian deed of Francisco Morazán, a thought of universal stature, as well as so many characters who give confidence in the wisdom and courage that it entails. our history.- Fickle analysts and effeminate recorders give the claim of a Homeland as out of fashion, hiding or perhaps without imagining that a country and Homeland are not synonymous, a country is an area measured in square kilometers; a Homeland, is much more, are the common desires of a people, a single heart beating for the common social, economic and cultural progress. It is a single muscle in pursuit of the future.

To establish these ideas of how our society should explain the world, its horrible existence, its behavior in the face of politics, the economy, material misery, justice, spirituality and other ways of interpreting the passage through this part of the universe, from birth to death. tomb, of all this, the powerful colonial ideological structure of Spain has been in charge for five eternal centuries, first; of the English later and, since the last century, the United States through its local satellites (formal education at all levels, the media, churches, political parties, the family and other sources of ideas).

Where there were slaves and serfs, servile characters were embodied.- Defeated the man, they did not kill him, they made him work for his own benefit.- Subject to the yoke, trembling before the whip, the slave doubled over pressed by wide straps around his neck that in his character fused domesticity.- Some –says the story– were rebellious or achieved dignity: if the rebellion was real, the murder was punishment; the annoyance of others was only a gesture of a hungry animal, of a candle thirsty for bread that to receive more begged for more beatings from the master, and his success when they gave it to him implied worse baseness, complicity and vices of the executioner.

When they exercised some authority, they became despotic, without virtues that stopped them from infamy, as if they wanted with their wickedness to forget the suffered servitude and as if, being torturers of their own people, they were of the same class as their lords and bosses.

This scheme is faithfully summarized today in Honduras and in the majority of towns in America and Africa; That chain shines more in the groups that have real power in the Honduran nation, which, being able to show some honor, choose to lower themselves to servants from abroad and antisocial from their land.- From the primitive fear of the servant, the protests in the media jump hysterically. communication when in a dignified gesture and attached to universal norms of diplomacy, the Castro Government requests the United States ambassador not to issue opinions on matters that strictly correspond to the State of Honduras.

The domestic immediately jumps nervously in defense of the foreigner or of those who feel superior, assumes as an offense that the stranger is spoken to without complexes, defending the sovereign rights of the people or treating the foreigner as equals to the Honduran, but that virulence changes tone when it is before those he believes to be inferior, he approves to the death of those who resist a dictatorship, lies are a strategy and hunger is the merit of those chosen by heaven.

That is the psychology of the candles, those who do not understand that decorum is the main effect of integral, creative work and the construction of mental and transcendental well-being; the accumulation of wealth is the obsession of the unfortunate, precisely because they never seek knowledge; They are unaware that the philosophy of the most brilliant men, were not their works embodied in books and immortal phrases, their true wisdom was a simple life, humorous, decorous and without desire for opulence or earthly importance, that’s how Socrates, Aristotle and Christ lived .

The slave, even when politics declared him free, never left the mental prison, the same thing happens with many countries and characters with titles and high positions.- The Argentine thinker, José Ingenieros, wrote: “There are countries that mock them as republics ”.- That stigma of “banana republic” is fueled by servants, those who camouflage their insignificance with candles and self-disrespect speaking on behalf of society, when the contempt is personal.

The slave and the serf continue to exist; by temperament or lack of character. They are not the property of their masters, but they seek the guardianship of others, like stray animals.- Their mass psychology was not transmuted with the rights of man: freedom, equality and fraternity, those are fictions that they repeat, without passionate feeling for the Homeland.

The laws cannot give manliness to cowards, character to the amorphous, dignity to the debased, initiative to imitators, virtue to the hypocrite, intrepidity to the meek, desire for freedom to the servile.- Therefore, in imitations of democracy, mediocre characters with influence, from the assigned seat, seek for subsistence to sink society to the level of their domestication.

It would be necessary to copy the entire eloquent “Discourse on Voluntary Servitude”, written by La Boetie in his adolescence and covered with glory by the admiring praise of Montaigne, asks Engineers.- From there, thousands of pages scold subordination to social dogmatism, to unconditional compliance with accepted prejudices, respect for upstart hierarchies, blind discipline to collective imposition, determined homage to everything that the current order represents.- Systematic submission to the will of the powerful, and everything that it reinforces domestication, which has the inevitable effect: servility.