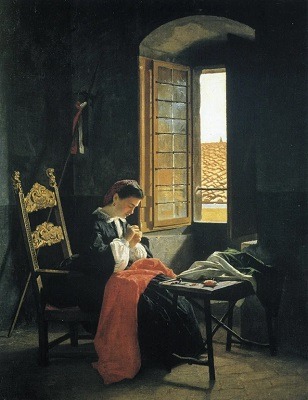 For years I have been reading a women’s magazine linked to a well-known national newspaper. On the last page of the magazine, a portrait of a woman who has distinguished herself in the profession is proposed every week and who tells about her day: from waking up to evening hours.

The different habits of a more or less young person with significant work interests, hobbies, family commitments and various passions are briefly presented. All marked by timetables that from breakfast to dinner and after dinner dot the daily time.

I have repeatedly noticed that these women, who have distinguished themselves in areas of work, study, sporting or artistic activities, never report moments dedicated to prayer. They do not exist? Do you want to reveal their presence? If they interviewed me would I say it? Maybe yes…

Faithful and practicing lay women find it difficult to publicly show their disposition to pray. They talk about yoga, various techniques of relaxation and meditation.

Domestic spaces – where there is sometimes no shortage of gymnastic equipment and, for the more wealthy, gyms or even swimming pools – do not seem designed for spiritual pauses in which to welcome the well-known evangelical invitation: When you pray, enter your room, close your door and pray to your Father in secret; and your Father who sees in secret will reward you (Mt 6,5-8).

Something new seems to have appeared during the lockdown: in our house a small table appeared near the television with candles and incense sticks to be lit during online celebrations.

Little compared to just over a century ago. There were niches set in the walls of some houses of the past, in which there were small statues for religious worship. The private chapels in historic palaces and in country villas of the nobility or upper middle class had a double entrance: for the lords and for the peasants.

Despite these sad social distinctions, there was no shortage of secluded places in the home and work camps in which to go to pray during the day. Even nature – still not yet violated by industrial settlements – offered the best space to gather in prayer.

The splendid images by Segantini and Millet dedicated to the prayer of theAngelus Domini. Not to mention the beautiful film The Leopard by Luchino Visconti whose opening scene is that of Prince Salina’s family gathered in a large living room for the recitation of the Rosary.

Today at that time the women come home after a day’s work, perhaps thinking about the children to follow in their school assignments. And if a more or less valuable kneeler stands out in a room of the house, it is generally an elegant and useful piece of furniture for placing vases of flowers, books or other furnishings.

Difficult to see among furnishing magazines some signs of countertrend signed by designers and architects (men and women). And yet, art historians teach that in some eras it was precisely the artists who conveyed a secular faith that circulated in silence, clandestinely.

Pausing on images of Italian Risorgimento painting, we admire illustrations of domestic interiors where unequivocal signs of thinking in favor of the war of liberation appear. In small-format paintings we see poor rooms with images of Mazzini and Garibaldi on the walls or prints with a view of Venice that has not yet been liberated.

And again, in the beautiful paintings by Odoardo Borrani, the women at home sew fabrics that recall the colors of the new flag or the red shirts of the patriots. They are works by artists (including Gerolamo and Domenico Induno, Giuseppe Sciuti) who had become interpreters of popular moods, of faith for the patriotic cause. A painting much loved by the public and increasingly appreciated by collectors.

It is proof that the Italian families of the time, even the humblest ones, shared a love for the homeland more than the dominant culture did. The artists had captured this silent but lively feeling by drawing and illuminating some corners of the houses of the time.

The house and the park

Home interiors and furnishings may still favor a religious faith that we practice too quietly. It is possible to experience living spaces without falling into easy homologations. There are corners in which to stop for a beneficial break, not gymnastic but regenerating.

A few minutes a day are enough for a pause in prayer in an armchair illuminated by a warm light or in a comfortable chair placed near a flowery balcony, a plant or flower pot, an image that pleases and excites. And candles can be lit not only during the holiday season or in invigorating baths.

The ancient Greeks used two terms to indicate time: Kronos (linear, quantitative time, made up of a succession of years, days, hours, minutes…) e Kairosmore difficult to translate but indicating the “right, opportune time”, the one in which something of quality happens, which is worthwhile.

Seeking – even in architectural planning – a suitable place for this unique time, personal but also sacred divine gift, is a new gesture, against the tide, a bit revolutionary but full of authenticity and auspices for a good future.

And women – who have promoted cultural revolutions in recent decades – can do it very well. Just be a little brave and creative.