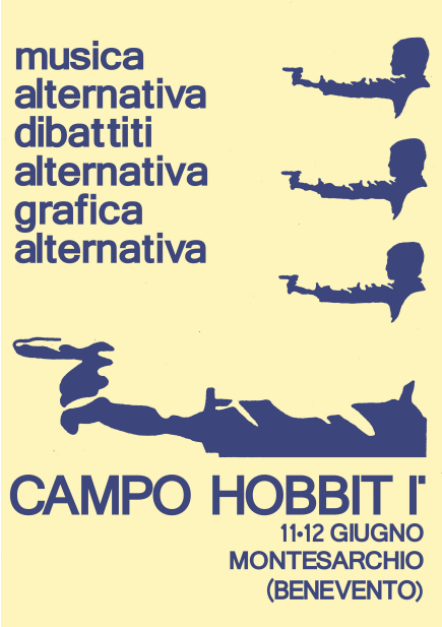 In 1977 the youth organization of the Italian Social Movement, the Youth Front, organized a festival with live music, free radio and debates on social and political issues. In a field in the Montesarchio locality, in the province of Benevento, hundreds of young right-wingers (including the future mayor of Rome Gianni Alemanno) gathered sleeping in tents, talking about women and avant-garde theater and listening to bands like the Friends of Wind and the Fellowship of the Ring. Among other things, the militants present tried to form a large human Celtic cross, a symbol that was present in many flags and banners at the camp.

This festival was called “Hobbit Field”, from the name of the fantastic creatures invented by the English writer JRR Tolkien, forefather of modern fantasy fiction and author of the well-known saga of Lord of the Rings, published between 1954 and 1955. After that of 1977, various other editions were made, still today considered the most striking example of the fascination of the Italian far right – but also, to a lesser extent, international – towards Tolkien. A fascination that has often been contested and criticized by lovers of fantasy and Lord of the Rings of the left or in any case who do not recognize themselves in the radical right.

The manifesto of the first Hobbit Camp

The one between the far right and fantasy universes is a cross that has a long history, which began with the first translation of Lord of the Rings appeared in Italy in 1970, published by Rusconi. In that edition, the text was preceded by a very long preface by the Italian intellectual Elémire Zolla, an expert in the history of religions and esotericism. Zolla in his preface provided an interpretation key entirely centered on the symbolism of the trilogy, and on the fact that Tolkien, more or less unconsciously, had understood the whole of history as a metaphor for the antithesis between the modern world and the ancient world, between progress and traditionalism.

From this interpretation, a right-wing critique developed from the early 1970s that accentuated these meanings attributed to Tolkien’s work. At the time, the European radical right, especially the Italian one, were going through a long period of crisis in which they had to reinvent themselves. Almost everywhere they had been politically marginalized following the defeat of Nazi-Fascism: in Italy the heir party of that political culture, the MSI, struggled to find a new imaginary to refer to, while in Germany any far-right party that tried to establish itself was declared illegal.

Just to start the radical right towards a new course, the French philosopher Alain de Benoist theorized one nouvelle droite (“New right”) anti-modernist, anti-capitalist, nationalist, against immigration and in favor of European cultural homogeneity. This new right influenced all European political cultures, and in the Italian case led the militants to develop a nostalgia for the past, for a sort of primeval fascism, considered purer than that of recent years and closer to the ideas of Baron Julius Evola .

Evola, one of the leading intellectuals of the Italian far right, never dealt with fantasy literature, but wrote various criticisms of the “modern world” and progress. Instead, he exalted medieval and Renaissance mythology, ancient symbols and pseudosciences such as alchemy, of which he wrote extensively in his book. The thermetic radiation.

Both a certain right-wing criticism that the neo-fascist militants, especially the younger ones, were in search of a new reference imaginary to refer to, therefore, influenced by the philosophical system of Evola, attributed to Lord of the Rings symbolic meanings hitherto unpublished. They were probably also fascinated by the fact that Tolkien’s work is quite explicitly inspired by Norse and Northern European mythology, another reference imaginary of the neo-fascist symbolic apparatus: in those years the Youth Front began to use Celtic crosses in demonstrations , black on a red field.

According to Paolo Pecere, writer and historian of philosophy, the Italian far right did a true work of mystification of Tolkien. “The sentiment at the time was” we don’t like today’s world, we feel excluded “” says Pecere, author of a book on the issue entitled The ring that doesn’t hold. Tolkien between literature and mystification. “So seeing that Tolkien fables of a mythical and very ancient past, anchored to traditions, to kings, they made it their flag: but it is an easy operation, because a literary work does not take any position on historical events, so you can give it the meanings you want ».

«According to their vision in the work there is a clear division between good and evil which would be a metaphor of tradition against modernity, of spiritual values ​​against material values» says Pecere. “But on closer inspection, the most significant characters in the trilogy are not only the heroes of both sides, but neutral characters, such as Treebeard, are also very important.” According to Pecere, in short, the right instrumentally used a work of fiction that had very different intentions than those attributed to it, and which had no particular political value.

Right-wing criticism has continued until recent years with these interpretations: in the early 2000s Gianfranco de Turris (one of the best-known exponents of this vein), he wrote that Mordor, the gloomy kingdom “with black gates” and teeming with orcs, is “an evident symbol of Modernity […]: a fusion of the Eastern materialist dictatorship and hyper-capitalism, of Western massifying technology ».

Despite the accusations of fascism against the author, then, linked precisely to the interpretations that were made of his work, it is known that Tolkien was actually a conservative Christian, and that on several occasions he demonstrated his opposition to fascism. In one letter he criticized the Nazi regime’s racial framework, and repeatedly spoke ill of Hitler (he once compared him to Sauron, the dark lord who helped forge the rings of power and who rules orc armies).

“Tolkien’s literary production is very varied,” explains Pecere. “He lends himself to very different, sometimes opposite, interpretations.” For example, long before the Hobbit Fields, Tolkien had also become very popular in the American hippie counterculture. “But it’s not that if the characters smoke pipe weed then Tolkien wanted us to smoke, nor does the presence of kings and knights necessarily indicate that an author is a monarchist.”

The Hobbit Fields were organized in various forms until the 1990s. Today the identification between fantasy universes and conservative political environments is less marked than in those years, also because from 2010 onwards a less politically connoted criticism has been interested in Tolkien’s work, changing its perception in Italy. Some traces of this attempt to appropriate fantasy imaginaries still resist: the largest youth event of the Brothers of Italy is called Atreju, from the name of the protagonist of the Neverending Story by Michael Ende. Giorgia Meloni herself, the leader of Fratelli d’Italia, has repeatedly declared herself a fan of the fantasy sagas and in particular of Tolkien.

Some crosses between extreme right and Lord of the Rings, on a smaller scale, there were also outside Italy: in the early 2000s, when Peter Jackson’s famous films about the trilogy were released, the well-known (now ex) white supremacist Derek Black tried to use those films to attract fans of the saga towards extremist right-wing positions. To the New York Times Black has told that on his online forum, Stormfront, he created a chat dedicated to films precisely for this purpose, thinking that those who were exalted by that “myth so white” could consequently have an interest in “white nationalism”.

Part of it is a discussion that has come back – in very different terms and contexts – recently, with the release of the Amazon series. The Rings of Powerset in the same universe as the Lord of the Rings but thousands of years ago. In addition to the high expectations and expectations, it was also talked about because in the cast there are various non-white people, an aspect that attracted criticism and racist threats on social networks against the actors in question, to the point that the production had to disseminate a statement in their solidarity.

In the United States the online controversy has been powered by media and right-wing politicians, according to which Amazon wanted to include in the series issues related to identity politics of the progressive area to the detriment of the skill of the actors and the goodness of the story. Furthermore, according to some commentators, Tolkien’s work would be based on European culture and therefore his characters were conceived of white skin by the author.

How has it observed researcher Craig Franson on the podcast American Idthe controversy against black actors has been used to propaganda and introduce some fundamentally far-right ideas into the debate, a bit like what happened recently with Disney’s Little Mermaid.

– Read also: The paradoxical controversy over the color of the Little Mermaid’s skin