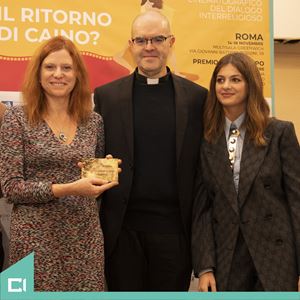 Disruptive for its originality and intense spirituality, a film has been dedicated to the nun who followed Francis by choosing the privilege of poverty Clear which will be released on December 7 at the cinema. On November 14th in the Vatican Fimoteca, Susanna Nicchiarelli the director received the #Outfield Award of the Entertainment Foundation. The leading actress Margherita Mazzucco was also present with her. We talk about it with Monsignor David Milanithe Feds chairman who presented her with the award.

What is the reason for the award?

«Chiara gives back to the story of the Saint the possibility of interpreting the events of all times thanks to the radical gaze of the director who wants to undermine the most canonical representation to offer a rebellious and lively, complex and stratified portrait. An irregular work in spirit although compact in form, secular by vocation, rebellious as every youthful tale of rupture must be, with a surprising and moving ending due to the way it combines naturalness and prodigy, music and silence , the ferment and the waiting, the here and now and the future».

An excellent story of the Saint made by a director Susanna Nicchiarelli who is not a believer.

«Cinema does not need professions of faith, but a commitment to authenticity. Chiara is a woman of faith and what is necessary is that she is narrated in her entirety, without simplifications or reductions. It is not an easy undertaking when faced with such a rich and complex figure. Many in similar operations, even with a great impact on the public, have failed by telling the stories of women and men in the Bible, for example, overstylizing their figure, reducing them – in fact – to a reassuring holy card. Susanna Nicchiarelli is once again faithful to her style and her poetics; starting from here he presents the saint of Assisi in all her essential dimensions, not only the most immediate and usable ones (running away from home, her relationship with Francis…), investigating the heart of her choice of consecration, the spiritual dimension, the decision to remain faithful to the Church while wanting to innovate it”.

In the centre, Monsignor Davide Milani, between Susanna Nicchiarelli (left) and Margherita Mazzucco (right) on the day of the delivery of the Fuori Campo award


Nicchiarelli works a lot on women in her filmography. Clear closes a trilogy of revolutionary women.

«Nico, Miss Marx, Clear. The saint of Assisi finds, in great sense, with respect to the two women depicted in the previous films; the singer, actress, muse of artists Christa Päffgen (Nico) and Eleanor Marx, the philosopher’s daughter, committed to protecting herself. Weaker and crushed by the bulky figure of her father. Chiara is a figure who finds a “solution”, a positive end: thanks to her faith and the community she wanted to surround herself with ».

A word about Margherita Mazzucco who gives voice and body to the nun.

«Margherita consecrates herself as a certainty in the panorama of the most talented Italian actresses – despite her very young age – with this leading role, the first on the big screen after her great success as Lenù in the series “My Brilliant Friend”. Chiara’s character is not easy to interpret because she is already abundantly “written” in the biography and historical reconstructions, skilfully conceived and defined by the director but in the need to reach a synthesis thanks to the actress’s interpretation. Margherita was extraordinary in giving depth to her character, allowing herself to be crossed by Chiara’s experience, infusing strength, youth, a revolutionary spirit and, at the same time, a grace and intensity of gazes that enrapture and move ».

How relevant is Chiara’s message?

«This film is current and its vision is strongly to be recommended and recommended above all because it is an interesting, well-made and engaging work. Then because his message is more timely than ever. Talk about young people who are not the future of society, but who are already the present, just believe in them and give them space. Talk about the possibility of experiencing God in the 1200s as today. It speaks of the transcendent irruption of everyone’s life, a fact that happens when one spends one’s life for the least, the weakest, the marginalized. He speaks of the urgent need for greater female protagonism in the Church and in society which still too often thinks of the masculine and relegates the feminine to ancillary roles. Finally, the figure of Clare, as described by Susanna Nicchiarelli in a masterful way, is also topical in the intra-ecclesial debate: it is possible and necessary to carry forward the continuous work of reform of the Church from within, remaining faithful to it but constantly committing oneself, even by paying a price, to renew fidelity to the Gospel. And the film shows this actuality in the surprising ending».