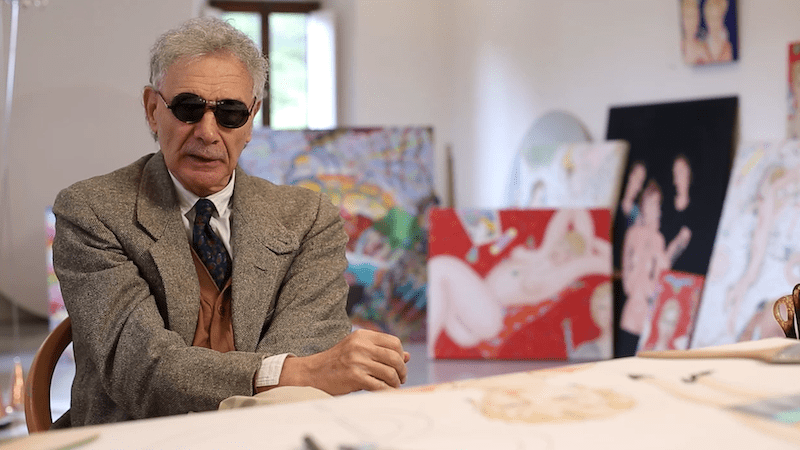 “The painter of two worlds” by the Florentine director Lorenzo Borghini, is an intimate journey into the universe of an extraordinary artist such as, Luca Alinari (Florence, 1943-2019.)

The film is not an artistic monograph but a sort of immersion in the life of Luca Alinari, thanks to the testimonies of friends who have crossed his path. The film makes use of numerous clips in which the artist appears, in which we listen with emotion to his voice talking about his making art and at the same time affirming that art has no meaning. Through various sources such as the videos created by the artist who was also an excellent film maker, the direct testimonies of family members, friends, art historians and representatives of various institutions, Borghini’s documentary highlights the existential and artistic journey of the Florentine painter. Through an original experimentation of pictorial genres and languages, Luca Alinari has traveled a long itinerary that ranges from Pop Art to imaginative interior landscapes, ending up in more conceptual art towards the end of his life, revealing, through his works, the innermost aspects of his personality.

“I knew Luca Alinari since I was a child – explained the director -. He was a close friend of my father and I was often taken to his exhibitions, which left me speechless: I loved his style. Then as an adult we bonded even more: my wife, an art historian, was the first in Italy to want to do a thesis on him. Shortly before his death Luca was interviewed by my wife (the critic Viktoria Charkina, ed) to write a master’s degree thesis on his work.

With Luca we bonded not only a long friendship, but also a passion for cinema: he loved Truffaut and Bergman. Unfortunately, Luca will not be able to attend the discussion. He had been battling an illness for more than ten years. From that knowledge, Viktoria wrote a book: Luca Alinari. The artist of the imaginative. The success of the volume convinced me to hire her as a screenwriter to make the documentary. The family has made available to us about 100 edited and unedited videos created by Luca with the collaboration of his friend Pino Pini and, with our crew, we interviewed many Tuscan personalities who knew him.

Luca was a loner, he lived in a Medici villa in Mitigliano, near Rignano sull’Arno, which is not even present on Google Maps. A timeless place, almost an Alinarian landscape. Yet when he was around people, he had a magnetic sympathy and charisma. From an initial atheism, in the last phase of his life Alinari developed an ever greater relationship with spirituality, a change that I wanted to highlight in the documentary also thanks to photography and music to create a vivid portrait of Luca’s inner world”.

Luca Alinari was important for his artistic activity and for those human qualities that he always knew how to express in his dialogue with others. On the occasion of one of his exhibitions that I had the pleasure of curating in 1985, he defined his making art with these words: “I often work like this: from the placement of a given thing in a given point a precise emotion arises and then, around this fragment painted, the picture slowly spreads. It spreads, it expands right through the “horror vacui”. The void, the tunnel, an illumination there in the background. Sometimes I suspect that the theme of this work, that its true naturalistic and abstract subject is not a bad painted closet or a hill. Not the hill and the cone, but the gesture, the gesture, the fact of painting. The painting itself”.

Luca Alinari painter of the two worlds perhaps means artist explorer of the possible, investigator of the enigma of reality. José Saramago defined Alinari as a “disturbing” painter, adding “his painting contains a seduction and, at the same time, something secret. It never fully reveals itself.” In fact, Luca Alinari’s painting has the charm of an apparent readability and ease. In reality it offers different readings and suggestions, signs of a complex and not easily recognizable personality. The film offers this suggestion and induces us to get to know his work through significant traces of Alinari’s personality.

The film presented in its Italian premiere at the La Compagnia cinema will be screened in various cinemas in Italy and in Tuscany in Grosseto, Empoli, Sesto Fiorentino and Prato.

"À la grâce de Dieu» Les Églises et la Shoah
What is diet culture and why are all of its foundations false?
A great meeting of media arts
Tweet
Share
Share
Pin