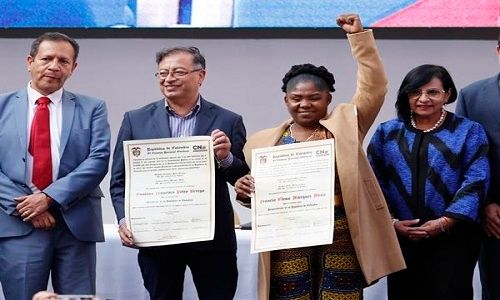 “When the black woman moves, the entire structure of society moves with her.” Ángela David, African-American activist, symbol of the fight against racist oppression in the United States (USA) and professor of Philosophy at the University of California, knows this well and expresses it well.

Ecuador, on the faithful of the Latin American balance

Before the electoral victory that led to the Vice Presidency of Colombia to Francia Márquez, he was the victim of an attack in 2019.

While they were meeting at the La Trinidad farm, in the village of Lomitas in the municipality of Santander de Quilichao, with members of the Community Councils of Norte del Cauca, they were victims of an attack with grenades and firearms. The agents in charge of the security of the leaders prevented the massacre and some were injured.

The representatives of 43 community councils, in the ten municipalities of Norte del Cauca, bring together 126,000 black and indigenous peasants and artisanal miners. They were meeting to plan the pending negotiations with the national government, as a result of their participation in La Minga, where they had to agree on the necessary state policies and resources for the benefit of their communities.

There was Francia Márquez, a leader dedicated to protecting the environment. She is also the coordinator of the Association of Community Councils of North Cauca (Aconc) and a national leader of the Process of Black Communities (PCN).

This was stated on his Twitter account. “The attack of which we were victims, leaders and leaders yesterday afternoon, invites us to continue betting on achieving peace in our territories, in the department of Cauca and in our country, it is already good from so much blood spilled”.

Black communities have a history of social mobilization that includes the struggle in the 1990s, in alliance with indigenous communities.

They have to their credit the achievement of the adjudication of the lands of the El Pílamo hacienda in Caloto. They also carried out the strikes of the cane cuts, due to the barbaric exploitation from the sugar mills; the continuous struggle to expand the benefit of the North Cauca Aqueduct, among other social purposes. Because it is necessary to compensate for the consequences of “a development that takes place at our expense”, says Francia Márquez.

The struggle of this woman is nourished by the experience of the neighboring indigenous communities. Together they aspire to the Community Councils having forms of self-government such as “Black People”. Let us remember that, in 2014, the black people of the North of Cauca demonstrated massively against illegal mining.

In recent years, economic interests and violence have “put the lives of communities and many leaders at risk” who safeguard them, said Francia Márquez.

Who is behind the “development model” that harms the communities, the legal and illegal mining exploitation and the appropriation of the territories?

Thank you Colombia. This fight did not start with us, it started with our ancestors. Today with dignity and greatness we reap the fruits of that sowing. Today the voice of those who are no longer here is raised and of the resurgents who will come and together we will begin to build #TheNewStory pic.twitter.com/mYBjKsZOcn


The “invisible” caretakers of the wealth of North Cauca are the blacks and Indians. Against them, violence is exercised by large landowners and traditional political partners, who fear the social time bomb.

They are “the nobodies: the children of no one, the owners of nothing”, the disregarded and rejodidos, in the words of the Uruguayan writer Eduardo Galeano. Those who were not voted into power by this new Presidency headed by Gustavo Petro, fear that the peoples of Northern Cauca will identify their common interests.

They have always feared that the “nobodies” develop an autonomous process of appropriation of the territory. That is the reason for the violence against them, evidenced in the expropriation and poverty since colonial times, with its renewed forms of confrontation. Anything goes as a resource to paralyze the organizational processes of the people.

But here are those who do not speak languages, but dialects. Those who do not make art, but crafts, those who practice folklore, those who until today far from having rights, have been human resources of power. The faceless, only recognized by their arms.

That poor majority seemed to find strength in unity, in ancestral spirituality and in collective actions.

Build a model that guarantees life

Francia Márquez, the third most voted candidate in the preliminaries and finally Vice President of the Republic of Colombia, heads her website like this. “I am part of those who raise their voices to stop the destruction of rivers, forests and moors.”

“Of those who dream that one day human beings are going to change the economic model of death, to give way to building a model that guarantees life.”

In her young existence -Cauca, 1981- she has a long political activism, who was a candidate of the “I am because we are” movement. An exemplary and consistent struggle, which has led her to be for the first time in the history of Colombia, an Afro-American vice president. .

The daughter of an agro-mining father, she proudly bears the surname Mina on her mother’s side. Her mother is a farmer, midwife and also a mine worker – how could she not be – where she taught her daughter to earn a living early, working as a gold miner in her town on the banks of the Ovejas River.

France Elena Márquez Mina had Carlos Adrián when she was 16 years old and then Kevin. She faced life as a black woman and a mother, so to support them she became a domestic worker in Cali.

When the land calls, in the midst of so many social injustices, he returns to his hometown, where he expresses his opposition to indiscriminate mining exploitation.

He had been raised in an environment with too cruel a history. He suffered with his equal, the fraudulent delivery of mining titles to multinationals, also bringing as a consequence damage to the environment and the forced displacement of black communities.

The young Afro-Latina was appointed legal representative, between 2002 and 2007, of the Community Council of the district of La Toma de Suárez.

From here it made eviction orders impossible, through a tutela action based on the violation of the granting of title without consultation and through mobilizing actions.

#SummitForEquality
We women take an important step in Colombian politics, with the elected congresswomen we will build a legislative and government agenda. Recognizing ourselves in diversity, we will advance in favor of life, equality and equity for women. pic.twitter.com/lK3rRkiDB7


As a member of the Black Communities Process Organization, he contributed to the resistance against illegal mining. Her activism led her to be elected president of the Association of Afro-descendant Women of Yolombó.

In 2011, they achieved the recognition of collective reparation for 27 Community Councils of the North of Cauca. This action was derived from the “March of the Turbans” of Black Women, for the Care of Life and Ancestral Territories, with the presence of 70 Afro-descendant women, during a long journey and protest – more than 600 kilometers – from Cauca to Bogota.

From this notorious fact, derives her appointment as defender of the year and the National Award for the Defense of Human Rights in Colombia.

The Ethnic Chapter for Peace also counts on your participation -2016- in the dialogues for peace, between the Government of your country and the former Revolutionary Armed Forces of Colombia – People’s Army (FARC-EP).

During that year of hard work, she mobilized women in favor of the First Meeting of Afrodiasporic Women for the care of life and ancestral territories.

Subsequently, in 2018 it was distinguished with an award that recognizes environmental leaders and makes their struggle visible. The Goldman Prize for the Environment for South America is an encouragement to her courage as an activist and environmentalist.

The best recognition we expect from the Government @infopresidency @JuanManSantos It is respect for life, the legitimate right to prior consultation and compliance with what was agreed in the ethnic chapter of the Colon Agreements….


Even when, due to her political activism, Francia Márquez receives threats against her life, she continues in a visible struggle, offering conferences in her country and throughout the world, with the aim of drawing attention to claim rights that she considered denied to the Afro-Colombian people. .

Márquez Mina arrives as a candidate for the House of Representatives of the Colombian Congress in 2018.

Previously, she became an agricultural technician at the National Apprenticeship Service and took care of her children. During this time, she also combined her political activity, with her aspiration to graduate as a lawyer from the Santiago de Cali University, with an award-winning thesis on structural racism.

France embodies the heritage of ancestral resistance and is an example of the fight for anti-racist and anti-patriarchal justice. He synthesizes his political program with a phrase derived from conversations with Angela Davis. “Occupy the state to put it at the service of life.”

Francia Márquez and the State at the service of life