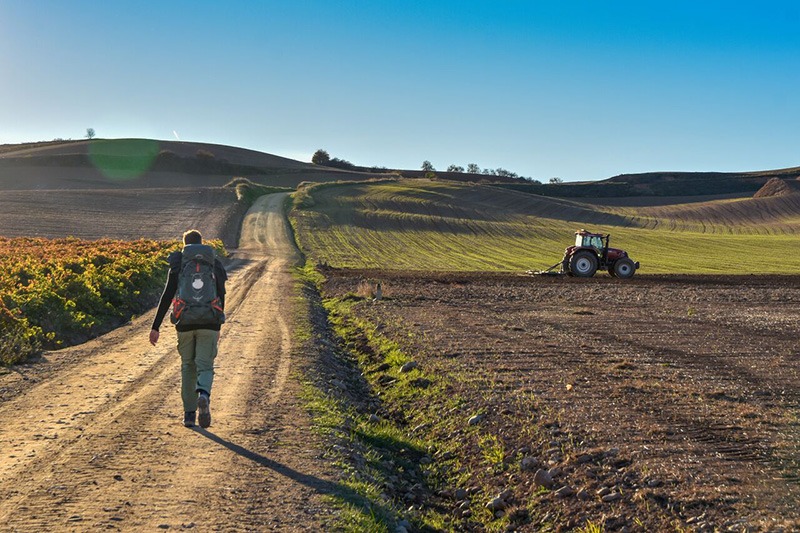 The first work describing the paths of Saint-Jacques dates from the 12thth century. These roads were, for centuries, major trade routes which marked the whole of Europe. Reaching its peak in the Middle Ages, becoming the third pilgrimage of christendom, the pilgrimage to Compostela then falls into oblivion. It was only after 1950 that these paths gradually regained their former attractiveness.

Nowadays, the paths to Compostela are traveled each year by tens of thousands of walkers. Universal heritage, they are registered in the Unesco World Heritage since 1998, an appreciation of the four symbolic pathsstarting from Paris, Vézelay, Le Puy and Arles which sum up many of the existing routes.

Pilgrims, of all nationalities, leave from several places in France or Europe to reach Galicia. The path, easy to take, with marked stages and multiple gîtes, is dotted witha rich heritage : churches, sanctuaries, hospitals, bridges…

A path of encounters…

The renewal of the pilgrimage responds to a need for meaning in the face of the rapid transformations of our consumerist society: walking becomes an antidote.

At the dawn of her 30th birthday, Pauline Wald quit her job as a Parisian executive and began to walk from her native home in Alsace towards Compostela, with the urge to slow down, to connect to herself and to nature. “I liked the simple idea of ​​a traced path, where I connected point A to point B. I just had to walk on this path full of history and spirituality.”

Leaving alone, like so many other pilgrims, the encounters become decisive:

“They are messengers. Many have given me strength and confidence to move forward, some have been real challenges. The balance between loneliness and encounter has been a question all along the way, a real exercise in learning to listen to oneself.”

From these exchanges will be born a book subtle and powerful, Walk towards its essential and an inspiring film Paths of Life. Pauline recounts her journey physical as interior and give the floor at key meetings path. Among them, David, a former pilgrim who welcomes on donation and lives without electricity or running water. Her words shared in Pauline’s book are wise: “You create your reality 100%. If you don’t like the outer reality you created, you cannot change it in the moment, but you can change your attitude within. When you live fully in the moment present, this moment is neither good nor bad… This moment is, that’s all.”

The singular roaming on these paths transfigures more than one pilgrim. After walking for four months, Pauline confirms:

“The biggest lesson applied on the way and which still serves me today is the theory of small steps. Faced with 2000 kilometers to cover, I divided the path into daily mileage and I dropped the notion of objective. In life too, moment by moment, little step by little step, everything can be achieved…“

The path is also a reconnection to the body by walking. Here again, the opportunity to learn: “I had to listen to my rhythm. If you force yourself to walk too much one day, you will have to step back later. The mind is not everything, you have to be aware of the limits of your body and your reality, if allow us to listen to our own cycles, like the nature that evolves before our eyes during the journey.”

Thank you to the Les Ecrans de l’Aventure festival, organized by the Guild and the city of Dijon, which made this meeting with Pauline Wald possible.

Compostela: on the way to the essential

In Siena the fifteenth edition of the Health Festival
"The Sculpture Show" the collective dedicated to sculpture in Pietrasanta
All the good and all the bad that we think of “Cross”, Justice's first album
Tweet
Share
Share
Pin