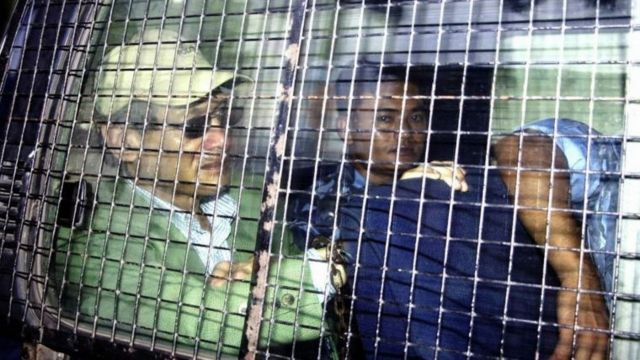 In the 1970s, a wave of murders by Frenchman Charles Sobhraj shocked Asia.

Known as the “Snake” or the “Bikini Killer”, Sobhraj was a determined man famous for his ruse to evade authorities using the passports of his victims, who were often Western tourists traveling on the “trail of the hippies” of the Indian subcontinent.

The dramatic life of the infamous serial killer, now 78, has inspired literature, films and most recently a TV series co-produced by the BBC and Netflix.

After being jailed for 19 years for killing a Canadian and his American friend, Sobhraj was released on Friday after Nepal’s Supreme Court ruled he should be released on health grounds, citing his good behavior and age. advanced.

But who was really “the snake” and how does he spend his days today?

Born in Saigon in 1944, the son of an Indian merchant who denied him paternity and one of his Vietnamese employees, Sobhraj obtained French nationality when, after his parents separated, his mother married a French soldier and settled in Marseille, in the south of France.

His father’s rejection scarred him and caused him resentment and hatred: “I will make you regret having failed in your duty as a father”, writes Sobhraj in his diary.

A terrible prediction that may have come true.

As a teenager, he never really integrated in Europe. He turned to street theft and auto theft in Paris. He went back and forth to reformatories, and when he came of age, he landed in prison.

But when he leaves, he finds a job thanks to the intervention of a benevolent man, who also introduces him to Chantal Compagnon, a member of the Parisian bourgeoisie, with whom he falls in love to the point of obsession.

For a short time, Sobhraj tried to quit the path of crime and got a job in a restaurant, but his unbridled taste for luxury and money soon led him back into crime.

Soon after, he is arrested again for car theft, but Compagnon, blinded by her charms, waits for him to get out of prison and marries him. Together they embarked on a trip to Asia, where they had a daughter.

At the age of 30, “the Serpent” made Thailand his new center of operations.

Many people who knew him agree that he was a charismatic individual.

“Charles Sobhraj’s specialty was to assassinate hippies who came to discover Asia”, explains Gary Indiana, who met “the Serpent” in the 1980s, in an article by Vice.

He suggests that because of its “provincial” and “non-European” appearance, white tourists on the hippie trail found it interesting and “harmless”.

“Sobhraj had no qualms about scamming these spiritually thirsty backpackers. He despised these people, considered them cowardly and immoral,” he adds.

Why he murdered “hippies” remains a mystery, but some of those who followed him closely suggest the answer may lie in childhood trauma.

Herman Knippenberg, a Dutch diplomat who, after the death of a Dutch couple in Thailand that local police failed to investigate, began to connect the dots and uncover the crimes, believes that he killed them because they did not obey him easily.

“By resisting Sobhraj’s injunctions, he relived his childhood worries of being rejected,” he explained in a conversation with British journalist Andrew Anthony.

By the 1970s, the hippie trail had become a popular destination for many young Europeans and Americans traveling from Western Europe to the Far East via the Middle East and India.

At that time, border controls were not so strict and “the snake” took advantage of this.

The romance with Chantal Compagnon ended when they were both arrested in Afghanistan. He managed to escape by drugging a guard; she remained in prison, but upon her release she decided to start a new life away from her problem husband.

However, Sobhraj told journalist Andrew Anthony – who interviewed him in Paris in the 1990s and then in 2014 in a prison in Nepal – that Compagnon continued to support him financially and they stayed in touch for a long time afterwards. their separation.

Two years after the arrest in Kabul, Sobhraj met Quebecer Marie-Andrée Leclerc in Srinagar, India, and convinced her to spend the summer together in Thailand.

She also cannot resist the charms of the man she knows little about at the time, but who will change her life forever.

Little by little, she lets herself be dragged in, begins to participate in the crimes and ends up becoming his accomplice.

The modus operandi of the “bikini killer” was to drug his victims before seizing their property.

He earned the nickname after being linked to the deaths of several Western women in bikinis in the resort town of Pattaya, Thailand.

He took advantage of the naivety of many Western tourists, gaining their trust by inviting them out for a drink: the victims often woke up in their beds with no memory of the previous night.

“He was a man with multiple identities: he was an Israeli intellectual one day and a seller of Lebanese fabrics the next, and he traveled Asia in search of his prey”, recalls Gary Indiana in his article published by Vice.

Sometimes Leclerc and Sobhraj abducted their victims for days or even weeks. The Canadian gave them a “medicine” that made them confused and nauseous.

They also stole their passports in order to travel and operate in other countries in the region, thus confusing the authorities.

This way of sneaking catapulted the Frenchman as “the snake”.

According to reports, Charles Sobhraj was fluent in multiple languages, which came in handy when taking on the identities of his many victims.

The Incredible Party That Helped Him Escape

In 1971 he escaped from prison in India – where he was serving a 20-year sentence for poisoning French tourists on a bus – by feigning appendicitis and fleeing hospital.

He was arrested again in 1976, but ten years later he managed to escape in an even more surprising way: by organizing a birthday party to which he invited both guards and prisoners.

Grapes and cookies given to guests were injected with sleeping pills, knocking everyone unconscious except Sobhraj and four other escapees.

According to local press, the group was so proud of their escape that they were photographed walking through the prison gates onto the streets of New Delhi.

15 million US dollars for his image

As a fugitive, Sobhraj made little effort to escape justice and frequently went out to enjoy the nightlife. So it didn’t take long for him to be arrested again.

Some believe he decided to escape towards the end of his ten-year sentence in India in order to be recaptured to face new charges.

He could thus avoid being extradited to Thailand, where he was wanted for five murders and where he almost certainly risked the death penalty.

When he was released in 1997, the 20-year deadline for him to stand trial in Bangkok had expired.

Sobhraj returned to France, started a new life in Paris’ Chinatown, hired an agent, and negotiated interviews and photographs.

Victim of his own ego

But in September 2003, he made a mistake: he went to Nepal, a country where he could still be arrested, and was immediately recognized by a local journalist.

Many say he was a victim of his own ego.

He was tried for traveling with a false passport and for the murders of a Canadian tourist and her American friend that he had perpetrated 28 years earlier.

Although he was charged with the deaths of 20 people who were drugged, strangled, beaten or burned in India, Thailand, Nepal, Turkey and Iran between 1972 and 1982, it was not until August 2004 that “the Serpent” was convicted of murder for the first time.

As usual, Sobhraj denied the charges, but police claimed this time they had a “suitcase full” of evidence against him and he was sentenced to life in prison.

He is still in detention in Nepal and in September 2014 he was found guilty of a second murder, that of a Quebec tourist.

Interviewed by biographer Richard Neville, author of Life and Crimes of Charles Sobhraj, the serial killer confessed: “As long as I can talk to people, I can manipulate them”.

Prison did not prevent him from continuing his life.

For more than 10 years, he has had a romantic relationship with Nihita Biswas, the daughter of one of his Nepalese lawyers. According to local media, he married her in 2010.

And according to the British newspaper Sunday Mirror, which managed to speak to him in March, “the Serpent” still maintains his innocence.

Charles Sobhraj: Who was this cunning hippie killer who evaded authorities thanks to his victims’ passports – BBC News BBC Homepage