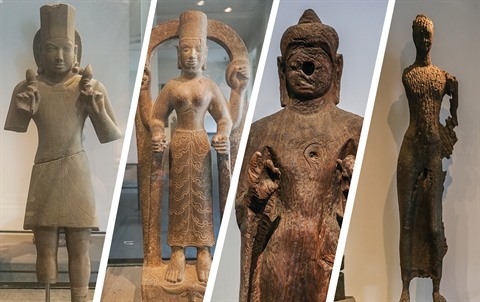 After four years of implementation of the project “Research on the archaeological sites of Óc Eo – Ba Thê and Nên Chùa”, researchers have more scientific evidence on a region with an ancient culture and a flourishing trade between the Ier and VIIe centuries.

>>A precious work on archeology

>>A millennial tower, symbol of the culture of Óc Eo

The project “Research on the archaeological sites of Óc Eo – Ba Thê and Nên Chùa 2017-2020”, carried out by the Vietnam Academy of Social Sciences, has achieved records in terms of the number of researchers, the area of ​​excavations , size, etc. It marked a turning point in the process of studying Óc Eo, one of the typical cultures of our country. Its new archaeological discoveries contribute to clearly identify the material and spiritual life of the inhabitants, the characters of the architectural monuments, the role of the ancient Lung Lon canal, as well as the forms of residence and cultural relationship of the inhabitants through the maritime trade network. from ancient times.

The project stipulates that Óc Eo – Ba Thê was once a large-scale urban, economic, cultural and religious center of the kingdom of Phù Nam. These are important results, proving that the current province of An Giang in the South was also an urban, economic and cultural center of this kingdom.

Vietnamese archaeologists have appreciated the results of the project “Research on the archaeological sites of Óc Eo – Ba Thê and Nên Chùa”, which gives researchers and the general public a general view of the culture of Óc Eo. A rich cultural and dreamlike stratigraphy has thus been discovered.

Although this is only the beginning, researchers from the Institute of Imperial Citadel Studies, the Institute of Archeology and the Southern Academy of Social Sciences have been able to use modern technologies to improve their comparative work. They also helped the inhabitants to become aware of the value of the monuments and the relics which surrounded them.

I am particularly interested in photos showing traces of houses on stilts and the initial attempt by researchers to recreate the architectural form of this type of dwelling from the Óc Eo culture. This makes it possible to visualize the ancient life of these inhabitants and their concrete living environment. This is a striking demonstration of the exceptional value of the site, making it possible in the near future to prepare a candidature file to be submitted to the United Nations Educational, Scientific and Cultural Organization (UNESCO) for the recognition of the archaeological site of Óc Eo – Ba Thê as world cultural heritage.

A more global overview of the urban area of ​​Óc Eo

The results of the excavations in the sites of Óc Eo – Ba Thê and Nên Chùa from 2017 to 2020 have shed light on the history of the birth and the flourishing period of the culture of Óc Eo and the kingdom of Phù Nam within the histories of the people and region of Southeast Asia. The objects found showed that the urban area of ​​Óc Eo cultivated trade relations with many regions and countries of Asia, even India, via the sea route.

Óc Eo – Ba Thê are the places where many foreign antiquities of all kinds have been found such as Roman gold coins of the emperors Antoninus Pius (in Latin Titus Aelius Hadrianus Antoninus Augustus Pius, 138-161 AD) and Marcus Aurelius (in Latin Marcus Aurelius Antoninus, 161-180 AD) as well as Roman and Indian jewels and jewelry, West Asian bronze mirrors, etc. These objects testify to the flourishing economic and cultural exchanges with the important countries of the ancient period.

Particularly, the foreign ceramics found in these sites have also informed us of the main period of development of the Óc Eo culture which is between the 1st and 7th centuries.e centuries of our era. The results obtained provide a reliable basis for determining the chronology relating to the stages of development of the urban area of ​​Óc Eo, and at the same time contribute to explaining in greater depth the traditional value proper to the ceramics of Óc Eo in history. ancient ceramics from Southeast Asia and Asia. Today we have a more global overview of the economic and cultural exchange relations of the urban area of ​​Óc Eo in history.

Scientific evidence of an ancient civilization