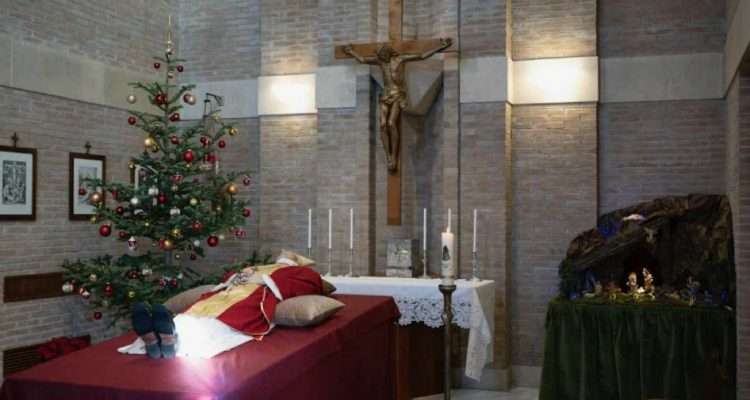 Benedict XVI, “a monk pope”. Someone has defined him like this and, probably, rightly so: perhaps because he was a man with a shy temperament, so noble, so kindas he described it Pope Francis at the Te Deum on December 31st; perhaps because he was a great scholar and a refined theologian, a lover of the liturgy and a lover of good music; or perhaps because Pope Benedict embodied in the Petrine ministry that maxim which is one of the culminating points of Benedictine spirituality: “nihil amori Christi praeponere”, put nothing before the love of Christ.

The primacy of Christ’s love: here it is the key of reading of his magisterium, from the beginning of his pontificate when, almost reluctantly, he found himself leading more than a billion Catholics in the world, up to the courage of his surprising renunciation and the life of silence in the Mater Ecclesiae monastery, where God alone met – continued Pope Francis – “thethe value and strength of her intercession and sacrifices offered for the good of the Church”. 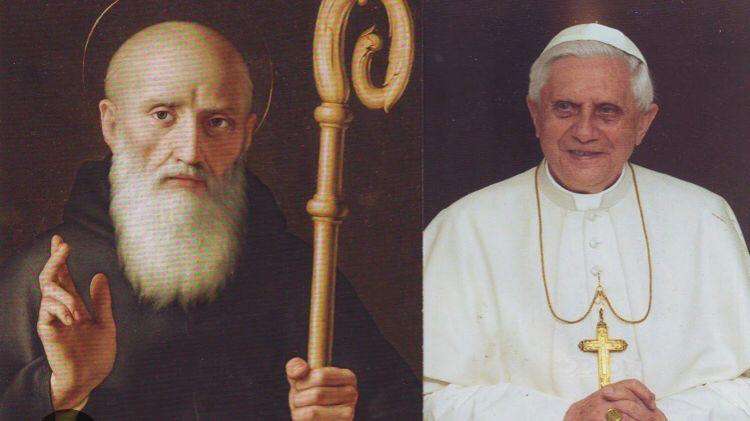 Benedict XVI had great admiration for monasticism and had a keen understanding of it. Many, perhaps too many to remember them all, the interventions that bear witness to this monastic heart of him. When he was still head of the Congregation for the Doctrine of the Faith, on the eve of his election, the then Cardinal Joseph Ratzinger paid a visit which soon proved to be prophetic: it was April 1, 2005 when he left Rome in the late afternoon – the evening before the death of John Paul II – to travel in Subiaco, cradle of Benedictine monasticism; here, in the church dedicated to Santa Scolastica – sister of Benedetto da Norcia – he read a masterly report on the relationship between Benedict and Europe in the contemporary world. In the conclusion, the prose took on lyrical accents, with the contours almost of a hymn:

“We need men who keep their eyes fixed on God, learning true humanity from there.

We need men whose intellect is illuminated by the light of God and whose hearts God opens, so that their intellect can speak to the intellect of others and their hearts can open the hearts of others.

Only through men who are touched by God can God return to men”.

And he concluded with the concluding pages of the Rule: “They put absolutely nothing before Christ, who can lead us all to eternal life”. It was already contained in those sentences in a nutshell the entire program of his forthcoming pontificate. 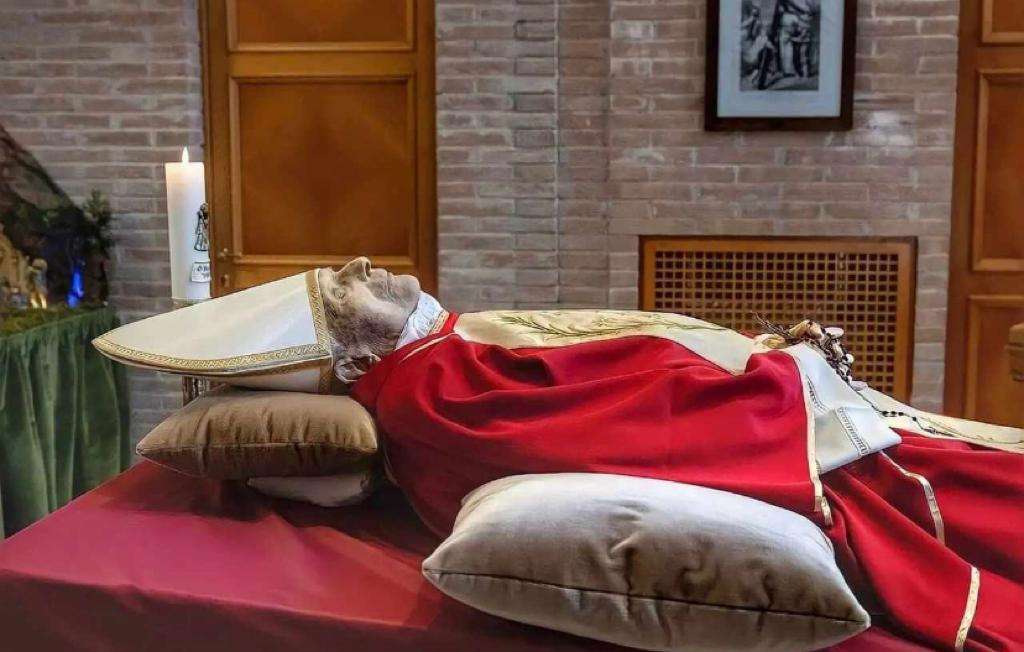 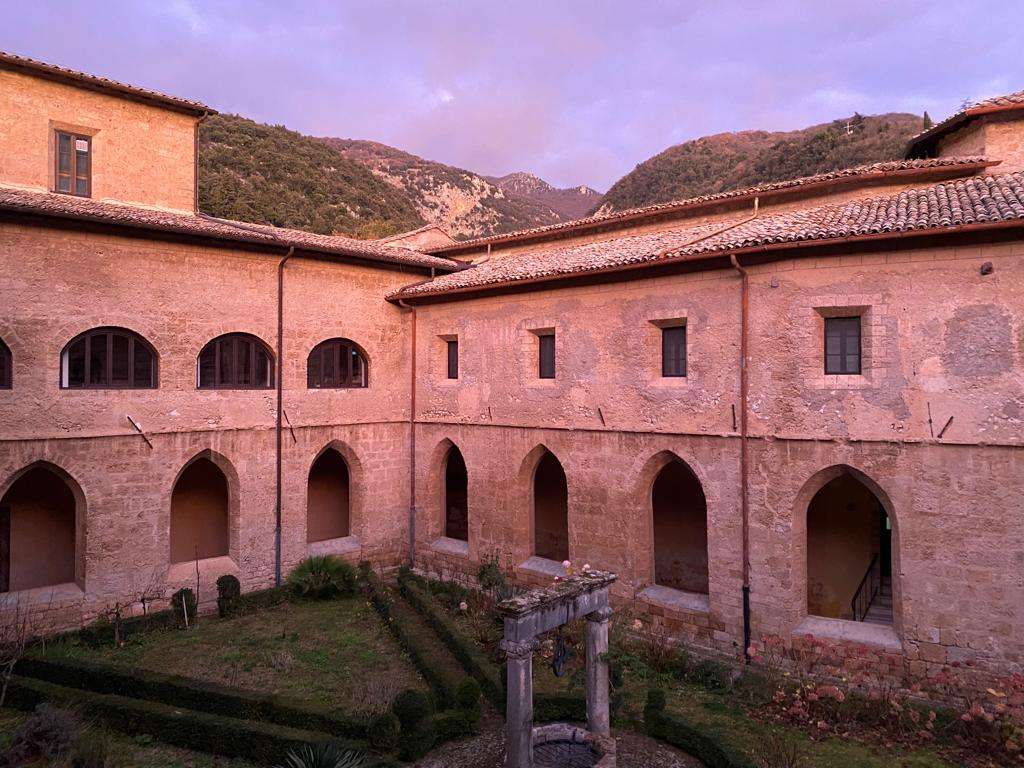 At the end of the same month, on the occasion of the general audience of 27 AprilJosef Ratzinger – now Pope with the name of Benedict XVI – explained the reasons for this choice: certainly, there was an ideal thread with his predecessor Benedict XV, the pope of the First World War; but that name evoked “the extraordinary figure of the great Patriarch of western monasticism, Saint Benedict of Nursia […] also very revered in Germany and, in particular, in Bavaria, my homeland; it constitutes a fundamental point of reference for the unity of Europe and a strong reminder of the inalienable Christian roots of its culture and civilization”. And asking at the beginning of his service, as successor of Peter, the intercession of Saint Benedict, the Pope reaffirmed once again the primacy of love: “Of this Father of Western Monasticism we know the recommendation left to the monks in his Rule: “They put absolutely nothing before Christ”.

The merit of St. Benedict was to indicate to his followers the search for God as the fundamental purpose of existence: quaerere Deum. Those who enter into a profound relationship with God are not satisfied with living in a mediocre and superficial way: “In this light, then, we can better understand the expression that Benedict took from Saint Cyprian and which he summarizes in his Rule (IV, 21) the life program of the monks: “Nihil amori Christi praeponere”, “Put nothing before the love of Christ” – Pope Benedict said again at the Angelus on July 10, still in the same 2005. “Holiness consists in this, a valid proposal for every Christian and which has become a real pastoral urgency in our age in which there is a sense of the need to anchor life and history to solid spiritual references”.

In 2007, during a visit to the Austrian abbey of Heiligenkreuz, indicated in the liturgical dimension a substantial aspect of the testimony of monastic life: “We stand before God: He speaks to us and we speak to Him. Where, in reflections on the liturgy, one wonders only how to make it attractive, interesting and beautiful, the game is already lost. Or it is Opus Dei, with God as specific subject, or is not. In this context, I ask you: carry out the sacred liturgy by looking to God in the communion of saints, of the living Church of all places and of all times, so that it becomes an expression of the beauty and sublimity of the God who is a friend of men”.

But it was in the monumental lectio held in September 2008 at the Collège de Bernardins in Paris – secular residence for the formation and study of the sons of Saint Bernard – that Benedict XVI offered a vision of the “origins of Western theology and the roots of European culture”. The search for God and the culture of the Word are connected to each other: to quote Leclercq, “the desire for God includes the love of letters, in all its dimensions”. For this reason St. Benedict in Prologue at the Rule call the monastery Dominici Servii Scholaschool for the service of the Lord. European civilization was built thanks to the work of the Benedictine monks, who, putting themselves at the school of the Word, “behind the provisional things they sought the definitive”. In emphasizing the prayerful and liturgical dimension of the interpretation of Scripture, Benedict XVI referred to that correct measure which on the one hand excludes “all that today is called fundamentalism” and on the other avoid “the lack of bondage and free will, which are not freedom, but its destruction”. Monasticism then welcomed the image of a creator God, that is “works and continues to work in and on the history of men”. The ethos of manual work is a constitutive part of that contribution of monasticism, without which the development of Europe and its formation in the world would have been unthinkable. And he commented: “What founded the culture of Europe, the search for God and the willingness to listen to Him, remains today the foundation of every true culture”.

As if that wasn’t enough, a few days later, the abbots and abbesses gathered for the International Congress of Benedictine AbbotsBenedict XVI returned to “that commitment to personal and community sanctification” that the monks pursue, thus giving effective testimony to the primacy of God, “in a desacralized world it is an era marked by a worrying culture of emptiness and nonsense”. A sign of this precious monastic contribution are “cultural and educational work”, still carried out today in Benedictine monasteries around the world and “the famous Benedictine hospitality, your particular vocation, a fully spiritual, human and cultural experience”.

“Don’t live for yourself anymore, but for Christ: this is what gives full meaning to the life of those who let themselves be conquered by him. This is clearly demonstrated by the human and spiritual story of Saint Benedict, who, having abandoned everything, set out to faithfully follow Jesus”, so Benedict XVI in the homily given on the occasion of the vespers of 24 May 2009 in Montecassinothe monastery which is “centuries-old oak planted by San Benedetto“, where is “the word Pax to welcome pilgrims and visitors”. Hence the appeal: “It is up to you in particular, dear monks, to be living examples of this interior and profound relationship with Him, by implementing it without compromise the program that your Founder summarized in the nihil amori Christi praeponere“put nothing before the love of Christ”. Once again, monastic life and the love of Christ were combined in the words of the pontiff emeritus, precisely in the monastery which houses the mortal remains of the patron saint of Europe.

In 2011 an already frail and tired Benedetto arrived in the Charterhouse of Serra San Brunoto highlight the “deep bond that exists between Peter and Bruno, between pastoral service to the unity of the Church and the contemplative vocation in the Church”. Perhaps a foretaste of the gesture he would have made two years later, Pope Benedict recalled the particular Carthusian vocation“the strong desire to enter into union of life with God, abandoning everything else, everything that prevents this communion and letting oneself be seized by the immense love of God to live only on this love”. A current and significant vocation in today’s world, where the progress of technology and communications has made man’s life more comfortable, but certainly more hectic and noisy. While a real “anthropological mutation: some people are no longer able to remain silent and alone for long” – continued the pope emeritus – “life in a Certosa participates in the stability of the Cross – stat Crux dum volvitur orbusso goes the motto of the Carthusian monks – which is that of God, of his faithful love”. So here is that, as in the Middle Ages the monks reclaimed inhospitable land, today the monasteries serve to reclaim the environment in another sense: sometimes, in fact, the climate that reigns in our societies is not healthy”, in the sense that “not only does God but also our neighbors get marginalized, and is committed to the common good. The monastery, on the other hand, is a model of a society that places God and fraternal relationships at the centre”. Even if in the eyes of most it seems impossible to be able to spend your whole life within the monastic walls, in reality one life is just enough to enter into union with God.

And two years after this speech he came that fateful February 11, 2013, when Pope Benedict made public his resignation from the Petrine ministry; announcement anticipated by a symbolic gesture of a few years earlier, when on April 28, 2009 in L’Aquila he placed the pallium on the casket containing the relics of Celestine Vthe pope monk, the hermit of Maiella on the throne of Peter. No great refusal from Benedict, but the will – as for Celestino – to devote himself entirely to contemplation, prayer and silence. And so it was, in that oasis that was the Mater Ecclesiae monasterya few hundred meters from Santa Marta, in the heart of the Vatican hill. As Benedict XVI reminded the Carthusians: “No vocation is marginal in the People of God: we are one body, in which each member is important and has the same dignity, and is inseparable from the whole”. His silence was therefore an offering of his soul to God and an unceasing prayer for the whole Church.

Today the figure of Benedict XVI and his pages are consigned to history and to the evaluation of men. Perhaps it will be many years before we fully understand and appreciate the richness of the legacy that he has left us. It’s time to leave this world to be welcomed into eternal homes, he managed to whisper what was the sign of his entire pontificate: Jesus, ich liebe dich, the primacy of Christ’s love.

On the same subject

Benedict XVI: behind the choice of the name the monasticism and the spirituality of Saint Benedict

ASIA
Treasury and the contributions of the faithful sustain the diocesan activity | The Advance of Segov...
Four books to discover Islam differently
Tweet
Share
Share
Pin