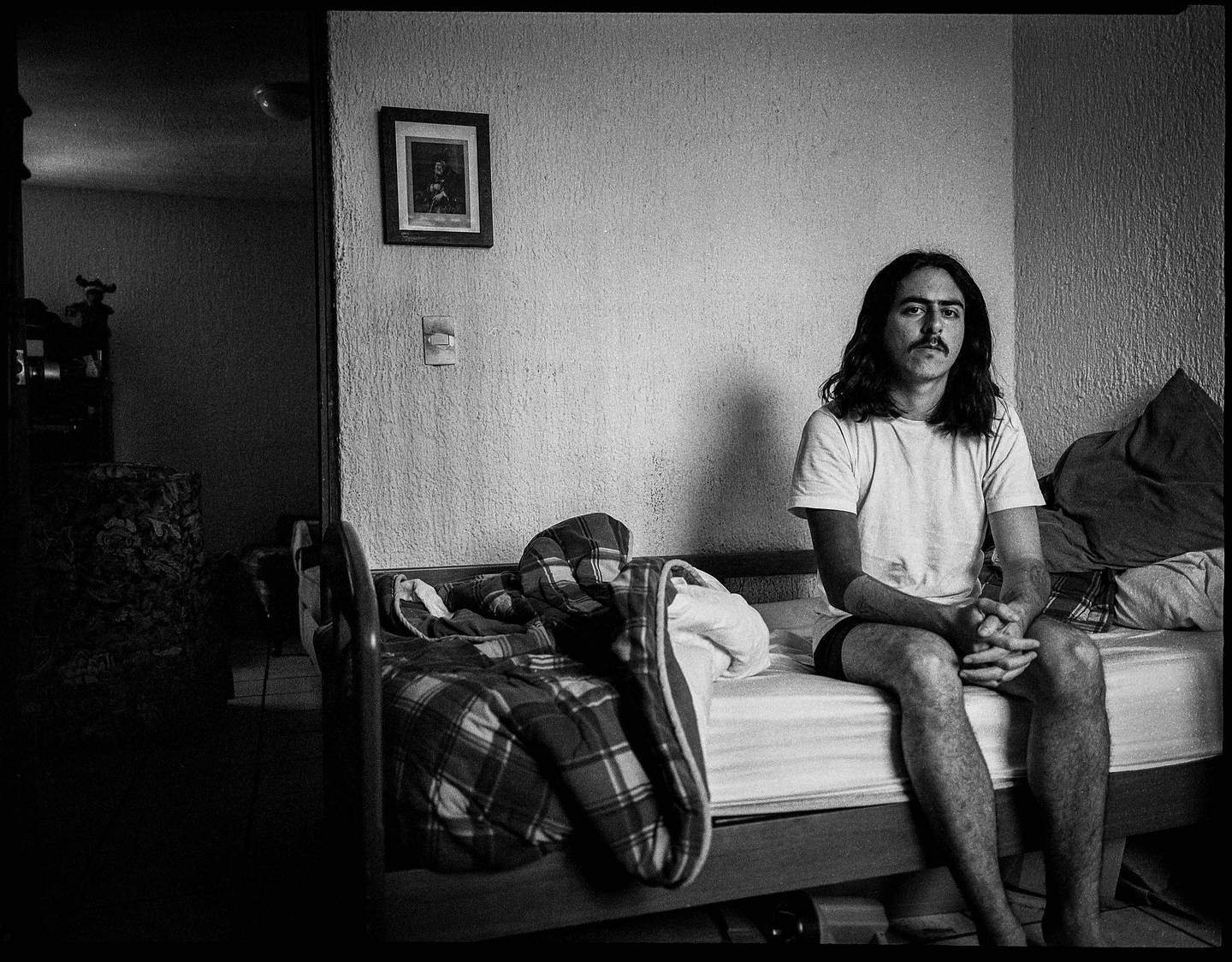 A naive or inconceived act of photographing is not possible, since by its very nature, photography is the most promiscuous way of seeing. The Mexican photographer and poet Diego A. Vignon finds in medium-format analog photography the protection and sentence of the image, through framing by choice or exclusion, he saves and condemns effigies in the rigidity of a moment that no longer exists, his photographs are ghosts out of the darkness of his nightmares.

His most recent photographic exhibition is entitled “Codeine, faith and genealogy”, whose narrative is the contradiction in which dreams, tragedies and everyday elements travel the path of the hero with a thousand faces postulated by Joseph Campbell.

“Codeína, fe y genealogía” was awarded the Production prize by the XIX Biennale of Photography at the Centro de la Imagen and was also nominated for the Marco Pesaresi 2021 award in Savignano, Italy.

Susan Sontag wrote in her essay ‘On Photography’ (1977), that photography is not limited to reproducing reality, it recycles it. What is your personal concept of this art?

Before discussing my personal concept of this discipline, I think it is necessary to clarify that photography does not interest me as a purpose, what interests me is the use that I give to this technique to achieve art. Many times it seems that I extend my hand to touch something impossible or unspeakable and touch my own soul with my fingers. Of course, if we follow the discourse of the neo-platonic philosopher Pavel Florensky, there is no inner or deep reality that is not related to an outer or tangible reality, in this way photography reflects something in particular in difference to the different artistic techniques.

Is there no way to suppress the intrinsic tendency of all photography to give value to its subjects?

The biggest mistake of art in our time is that this knowledge embraces clear pedagogical tendencies. In these contemporary inclinations, the image always has to propose, question or guide the viewer towards a fully tangible or literal discourse, with a clear political or ideological discourse and always forgetting that art is a free path, inspired by beauty, truth and the depths of human life. If my thesis is correct, the image is a terrifying revelation, a terrible angel, because it is always in charge of revealing different versions of darkness and mystery projected on the simplicity of the paper.

Tell me about the Marco Pesaresi Award nomination in Savignano, Italy, for your work made up of more than 3,200 reversed medium-format negatives.

Since 2019 I began to produce my first photographic series surrounded by a depression that I could not overcome. Halfway through production I applied for my series for two prizes, one of them was the Marco Pesaresi prize and the other the XIX Biennial of Photography of the Centro de la Imagen, both of which I was selected for. The Marco Pesaresi is one of the most important photography awards in Italy, I met many great Italian photographers of my generation who inspired me a lot, making me happy with the nomination I got for this contest.

Printing in platinum on palladium is a technique used in the past, by artists belonging to the Pictorialist Movement —who considered photography to be the medium and art itself— by Mexican photographers such as Manuel Álvarez Bravo. What benefits does this technique give to your work?

Actually, I think that my way of appreciating photography is very different from that of pictorialist photographers or that of Manuel Álvarez Bravo. As I answered in the first question, there is no internal reality that is not related to an external reality, we could call this an aesthetic of contradictions. Platinum Palladium printing is a very old and difficult technique, it is a type of printing in which I feel comfortable and where I am able to create visionary, diabolical and celestial images at the same time, that is, with this medium I am able to reflect my own spirituality or at least be close to this reflection.

Codeine is an opiate drug that exerts antitussive and analgesic effect. What is the narrative behind your feature debut ‘Codeína, fe y genealogía’, an exhibition that won the Production Award at the XIX Biennial of Photography at the Centro de la Imagen in 2021.

The narrative behind “Codeína, fe y genealogía” is contradiction, it is a series that only makes sense in my head, where dreams, tragedies and everyday elements acted as characters.

How was the process of portraying hidden privacy for this show?

When I returned from the UK in 2019, I had an urge to produce a great piece of art, almost like a duty or an obligation. While living in London, I stole 350 rolls of medium format black and white from the shop of a famous gallery in that city. This was the material that I used throughout the production of “Codeína, fe y genealogía”, almost as if I was preparing to return to Mexico to develop something truly relevant or perhaps it was the last howl or gesture of my youth. In any case, in reality the way of producing this series and the intentions in what it portrayed changed a lot from when I started producing this work to when I finished it three years later. I can say that at the beginning I acted in a very intuitive way, portraying close people or specific elements without really understanding why, however, by the end of the series I felt much more attracted to my dreams, visions and the urgency of representing their metaphors. . At one point I realized that I had two types of narratives, one of the daily type and the other of the spiritual and religious type, which I tried to join as when you wake up from the most beautiful dream in the middle of the dawn and during the passage of time or the course of the day, you forget the vivid and only ashes remain of what little you can remember.

What are those near-dawn dreams and puncture wounds that you had to delve into to get to the human condition and its darkest paths?

I love how I answer some of your questions in previous answers. There are two types of dreams, the afternoon dream, reddish and ambiguous, and the dream close to dawn, in which the soul finds itself abandoned in the invisible, in the blue sky of the morning and in the mystery that governs its narrative. . It is slightly impossible to explain this topic but I think the two main tools to understand it should be, intuition and the prioritization of the metaphor, without these two notions, the vision that we try to interpret while we sleep would be nothing more than a confused and meaningless image. Of course, my interpretation of dreams is not psychoanalytical or surreal, because what is essential in dreams is not the symbol but the desires that they express and produce in the course of our lives and not the frustrations or traumas.

Perhaps all kinds of pleasure are just a substitute, William Burroughs used to say. How is pleasure treated in this show?

“Codeine, faith and genealogy” is a work full of guilt.

In addition to analog black and white, what other formats did you work with for ‘Codeína, fe y genealogía’?

The only material I worked with was only medium format black and white film on a Fujifilm camera from the 1980s, I only used a wide angle lens throughout the production of the series.

If photography is direct, should it be related to contemporary life, with the pulse of today?

The photographic image must represent life itself, but isn’t contemporary simply a blink compared to the depths that life promises us? Photography (for example photojournalism) is always related to the events of the moment, to what is happening in our time, but the image always reveals silence and stillness. The viewer is presented with different nuances, lights and shadows, characters or objects that always shudder to the eye, I prefer to be inspired by the great masters of classical painting, since their imaginative proposals are undoubtedly valid, Fray Angélico shed tears at the end of each one of his works, his madonnas were revealed to Rafael, almost like a story impossible to understand, the photographic pulse of today (as I said before) loses all the potential that the image has by stagnating in the literalness of the moment.

Metro Underground / The image is a terrifying revelation