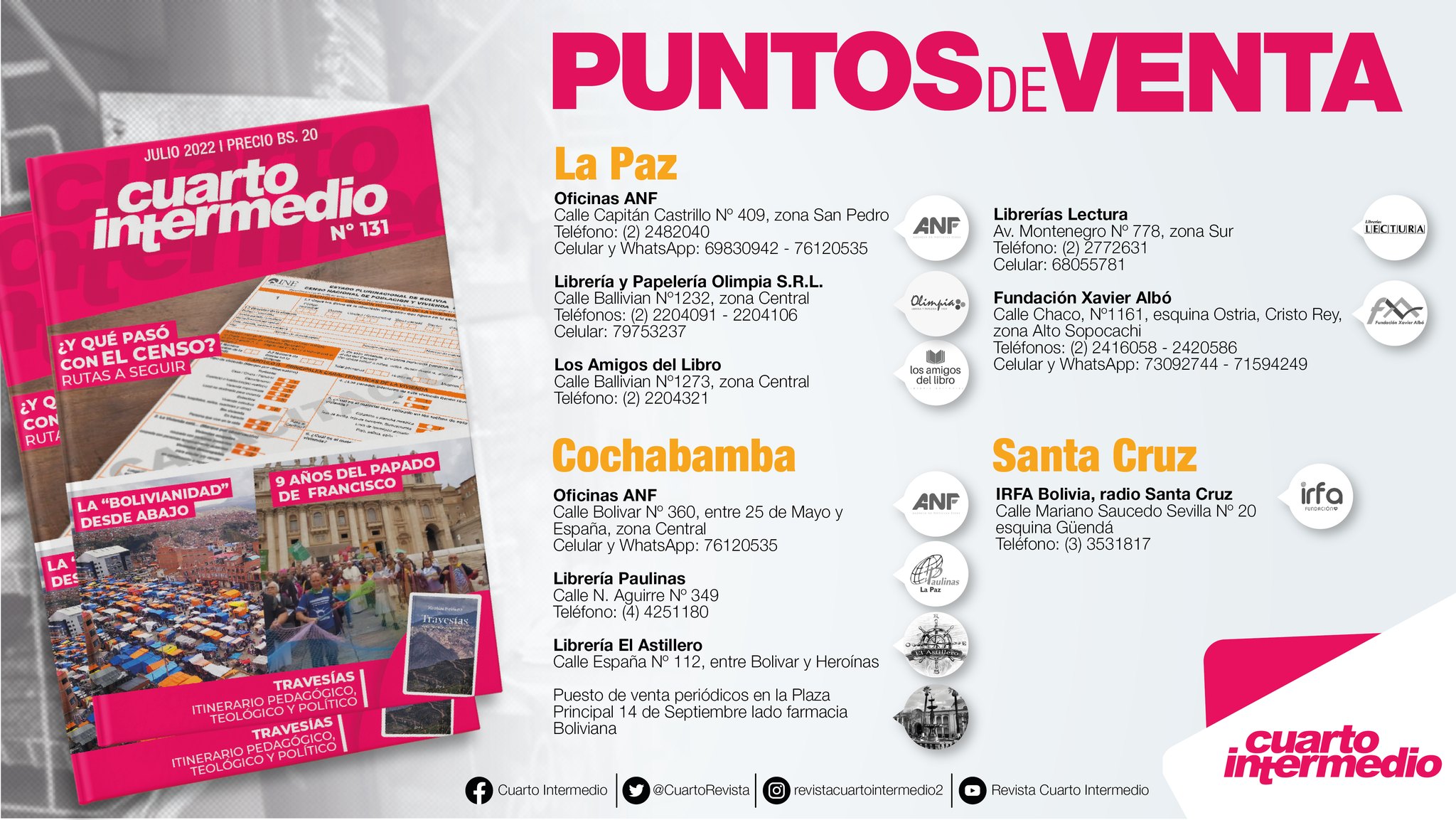 “And what happened to the Census?, routes to follow” is number No. 131 where articles with content are addressed so that society has material for consultation and analysis on this national event that plans the development of the country.

La Paz, September 7 (ANF).- The Cuarto Intermedio magazine, in its new edition No. 131 “And what happened to the Census, routes to follow”
presents elements to accompany the reflection and analysis of the process towards the National Population and Housing Census that should have been carried out in 2022, but was postponed.

Although this edition of Cuarto Intermedio closed with articles focused on the 2022 Census, the content was maintained in order to offer readers material for consultation, analysis, and debate that society should consider when advancing in the development of this national registry.

The article by Juan Carlos Núñez, director of the Fundación Jubileo, describes in chronological order the eleven censuses that were carried out in the country. He explains the importance of knowing the stages of the census; consider a real field work that covers scattered rural areas and a set of agreed questions in order to obtain adequate results in response to the demands of the population groups.

For her part, Carmen Ledo, doctor in urban-regional planning, provides an analysis and certain recommendations to improve the questions of the Census in Bolivia. She proposes a Statistical Observatory that seeks to transform quantitative and qualitative information in a systematic and permanent way with the purpose of deepening the knowledge of its socio-political, economic and cultural path. In addition, she attributes that the postponement of the Census comes from a lack of evaluation of the impact of the COVID 19 pandemic, immigration, emigration and other important issues to improve the quality of the population in general.

Fourth Intermediate also proposes articles on other topics such as the review of the nine years of the pontificate of Pope Francis carried out by the Jesuit theologian Víctor Codina, SJ, where the current Pontiff is described as an optimistic character, evangelically cheerful, who, being a Latin American, is sensitive to the situations and problems different from the European ones and, who lives the values ​​of Ignatian spirituality. In addition, he considers that Francis seeks to change social, economic and unjust structures that destroy the creation and survival of humanity. In this way, he positions him as a great reformer, who invites the Church to walk in synodality; in communion, participation and mission.

Another article in the new edition addresses the construction of Bolivian identity, together with the architect and analyst Guido Alejo, where it is proposed to rethink the imaginary game that Bolivians have based on economic, cultural, historical, and political components that provided positions from past times, to from its own people and its dynamism.

Finally, Fourth Intermediate includes the publication of the presentation conference of the book “Travesías pedagogical, theological and political itinerary”, by Mattias Preiswerk, doctor of theology and Protestant and ecumenical, as an invitation to review the itineraries traveled by this author.