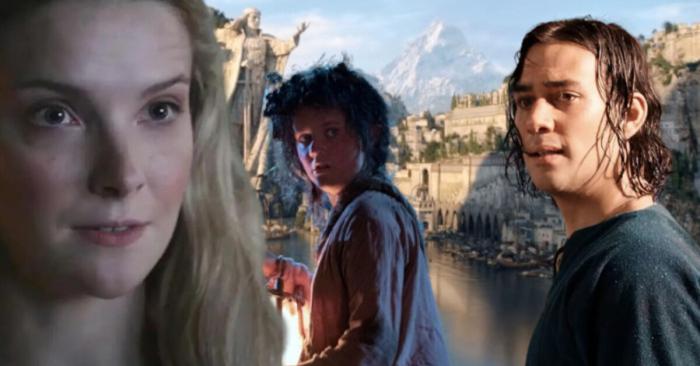 We know that the series The Lord of the Rings: The Rings of Power is eagerly awaited by the community, but with many reservations, as it emancipates itself from the works of JRR Tolkien. As the series comes out on Amazon Prime on September 2, the actors confided in their respective characters, and salute the freedom they were able to have to take on their role.

The rights of the annexes

She fascinates as much as she questions, the Amazon series The Lord of the Rings: The Rings of Power takes place several thousand years before the Peter Jackson trilogy and that of the Hobbit, during the Second Age, and will tell the story of Númenor, the ancient kingdom of Men who will eventually come to Middle-earth, the rise and fall of the great bad Sauron and, of course, the forging of 20 rings of power.

If, on paper, the pitch makes you dream, under this apparent varnish hides a reality that is a little more chipped. Several months ago, we learned thatAmazon had not obtained the rights to use Tolkien’s canonical works, but those of the information contained in the annexes of the Lord of the Ringsor detailed additions to the novels. This is partly why several new characters were written to flesh out the story.

A project that questions

This had led George RR Martin, the author of the Iron Throne to wonder about the Amazonian project: “It’s a weird deal, Amazon bought the rights to Tolkien, but not his novels. They therefore do not have the rights of The Lord of the Rings, The Hobbit or The Silmarillion (…) but they have those of the Appendices. I imagine they’ll build a Second Age mythology out of it. There is a lot of material, it will be interesting to see what they will do with it”.

The questions are therefore more topical than ever, 2 days before the launch of the series, despite the various trailers released by Amazon. Recently interviewed on the CBC channel website, the actors of the series have lifted the veil surrounding their characters.

New characters to fill the void

The presence of the two Woody Hobbits not present in Tolkien’s work is intriguing. And as such, Poppy Proudfellow, played by Megan Richards, and Elanor (Nori) Brandyfoot, played by Markella Kavenagh, portrayed their roles. The first is about a Hobbit “spiritualsarcastic and funny, also incredibly cautious, which comes from her background, which you’ll learn throughout the series.”

As for the second, she describes Nori as a “Resolute, curious and inquisitive Hobbit. There were times when I would read the scripts and be like, ‘At least don’t drag other people or other beings into your mess’.” Nobody wanted to find the archetype of a Pippin Peregrin Touque in this prequel.

Another addition, the character ofEärien played by Ema Horvath, Elendil’s daughter. “There’s a little less pressure, because you’re not playing someone that readers have already built in their minds.“, she said. “I mean, the other side of it is desperately wanting to be accepted by the fans; the existence… of my character must be accepted.“. Moreover, according to her, Eärien should add an important touch of femininity to her family.

a big responsibility on those already existing

This is not the case of Isildur, ancestor of Aragorn, and known to have refused to destroy the ring at the beginning of The Fellowship of the Ring. Portrayed by Maxim Baldry, Isildur is still young at the time of the Second Age. A responsibility filled with pressure and “agonizing” for the actor : “an explorer who leaves a bit of a trail of destruction wherever he goes”.

Another character from the main trilogy: Elendil, played by Lloyd Owen. Elendil is Isildur’s father:

What excites me is that Tolkien wrote sort of signposts, but he still hasn’t given these characters the breadth they have in the Lord of the Rings books. He adds that he was excited to have “the opportunity to start imagining what he might look like, to personify this character and to find his voice”.

So while some invented characters are given plenty of room to develop, some must somewhat match their counterparts in Tolkien’s writings. Nevertheless, Amazon wants to innovate and take risks.

John Howe, art director on the original trilogy, who is also working on the Prime Video series confirmed this last May: “It’s not Middle-earth that you remember. It’s a world that’s very vibrant. The Elves aren’t hiding in Mirkwood or always in Rivendell. They’re busy building kingdoms. The kingdom of Moria is not an abandoned mine and the Gray Havens is not yet an abandoned city. I loved having the opportunity to explore this part of history never before seen (…). We will finally sail the oceans of Middle-earth. […] The Elves are intimidating and enterprising, they almost colonize the world. They were very interesting to imagine. It’s something that neither the Lord of the Rings movies nor the Hobbit movies have touched on near or far. “.

If the idea is beneficial, hope the new creative team managed to find the middle ground, and not completely emancipating from Tolkien’s works, despite the source material available. Answer from September 2 on Amazon Prime Video.

The Rings of Power: the actors of the series tease their characters