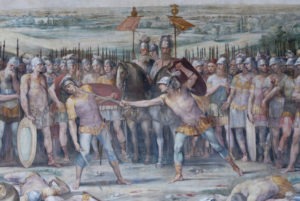 On this day, the Tigillum Sororium was celebrated as a purification of the military, now at the end of the battle season.

The Tigillum Sororium was the yoke under which Horatius the father made Horatius the son pass to purify him from the killing of his sister, who had mourned the death of one of the Curiatii brothers, with whom she was in love.

Under a bar, in an act of humiliation and submission, the Romans will also pass to the Caudine Forks: in short, passing under a “forxca” or a yoke, a bit like yoked cows!

And it is perhaps from this act of “lowering”, of bending (a bit like the kneeling of the Christian, which places him in the ancestral act of submission to the victor, because on his knees a man cannot or run away, and therefore accepts this which must be imposed on him, nor can he offend, and hence the joined hands, of Catholics but also of certain oriental peoples, who are “relatives of” shaking hands “or putting their hand on the other’s forearm as the Romans used : it is a sign that the most dangerous tool of man: the hand is taken in a gesture in which it can neither strike with a fist or hold a dagger, later with a pistol …) which it generates to counteract, by symbolic reversal, the bow! Which is up there, so high as to touch the glory of heaven and therefore not at all to be crossed, it needs a humble lowering, but on the contrary it makes the winner stand so haughty that to avoid the paranoia of too much triumph (which still today affects rich or politicians who lose contact with the ground very easily) that during the “Triumphs” on the chariot, next to the “Winner” there was an assistant who repeated, in a low voice, not to get up too much … from the ground!

The first Roman arch, the first ever, was built in wood, called “Tigillum Sororium”, “wooden arch of the sister”, or “Beam (joist) of the sister“, Under which, according to tradition, the survivor of the Horatii was forced to cross, to atone for the murder of his sister.

According to Dionysus, the arch, which overlooked the road, had wooden supports and architrave, while according to Festus it had masonry pillars and a wooden lintel.

The bow was it iugum(yoke) under which Horazio the father made Horazio the son pass to purify him from the killing of his sister who had mourned the death of one of the Curiatii brothers, with whom she was in love.

Serious crime, if Orazio had been her husband and not her brother. It was the only penalty that Orazio paid for the sororicide, since the court, thanks to the intervention of his father, pardoned him.

This confirms that fathers had the right of life and death over their children, at least in the archaic era.

The arch was located at the foot of the Velia and starting from here the Tigillum Sororium was celebrated every year, on October 1st, a festival in which the purification of the military was celebrated, which generally ended with the beginning of the colder season, at least in the archaic era.

This arch is considered the archetype of the Roman triumphal arches, where the rite of purification (and exaltation) of the weapons also took place, which was carried out with the passage inside them of the winning army.

According to Livio there were two altars at the arch: one dedicated to Juno and one to Janus, called respectively aedes Iuno SororiaAnd aedes Iano Curiatiowhich stood on the sides of a door, being two divinities linked at the beginning, at the end and to the passages and to the “rites of passage”.

Ianus Curiatius was the God who opened the entrance to the curias, and readmitted warriors returning from wars to citizenship, making them return cives, and Iuno Sororia, Great Mother linked to the birth, growth and death of men, animals and plants. It was originally the Goddess giving birth to a son with whom she then mated.

The location of Tigillo Sororio, one of the gates of Rome in pre-Servian times, stood in the area of ​​the Imperial Forums, at the beginning of the uphill road, formerly Clivo di Acilio, corresponding on the other side of Via dei Fori Imperiali to the Clivo di Venere Felice, in correspondence of the murus terreus, the saddle that connected the Velia with the Oppio hill.

According to the version reported by Tito Livio (Hist. I, 24-25), during the reign of Tullo Ostilio (VII century BC) Rome and Albalonga entered the war, facing each other with the armies deployed along the Fossae Cluiliae (on the current Via Appia Antica), on the border between their territories.

But Rome and Albalonga shared a sacred lineage through the myth of Romulus that made this war impious, so the respective sovereigns decided to entrust the fate of the conflict between the two cities to two groups of representatives, avoiding further bloodshed.

The Orazi, three brothers sons of Publio Orazio, were chosen for Rome, and for Albalonga the three Curiazi twins, who would face off in a sword fight. Livy states that historians were not in agreement in establishing which of the two triads was the Roman one; he favors the Horatii because most scholars choose that version.

The fighting began, almost immediately two Horatii were killed, while two of the Curiazi suffered only minor injuries; the third Horace, who could not have faced three enemies alone, found himself in difficulty, thought of resorting to cunning and pretended to flee towards Rome. As he had foreseen, the three Curiazi chased him, but as they ran they distanced themselves from each other, because wounded in different ways they chased at different speeds.

He was first reached by the Curiazio who had not been injured and, turning in surprise, he pierced him. He resumed running and was then joined by each of the other two Curiazi, who, however, being injured, became considerably tired and it was easy for him, one at a time, to kill them. The victory of Horace was the victory of Rome, to which Albalonga submitted.

Camilla Orazia, sister of the surviving Horace, was betrothed to one of the killed Curiazi, and violently reproached her brother for the crime, so much so that he killed her to silence her. To purify himself of her, she then offered a sacrifice to Juno Sororia, tutelary deity of her sister. Furthermore, for the trial of the delitto di perduellio (crime against the freedoms of the citizen, a crime that was actually instituted after the royal phase of Rome[1]) of which he was guilty by killing Camilla Orazia, whose life – since she was extraneous to the agreed duel – was sacred by law, Tullo Ostilio instituted, according to the legend reworked over time, special judges: the duumviri perduellionis (also to be brought back , in fact, at the next republican phase,[2]).

The relationships between Horatii and Curiazi were further intertwined, according to later versions of the legend, being Sabina – a native of Albalonga but Roman by adoption – both the sister of one of the Curiatii and the wife of Marco Orazio.

In ancient Rome there are testimonies of the Augustan age relating to the legend, such as a column of the Forum to which the remains of the Curiazi would have been hung and the Mausoleum of the Horatii at the sixth mile of the Via Appia.

In Albano Laziale, along the current Via della Stella, there is a late-republican tomb called the “Horatii and Curiazi”, but it is assumed that it is the tomb of other characters.

In reality, the war between Rome and Albalonga was bloody and the king of the defeated city, Mezio Fufezio, was quartered.

There are those who indicate San Giovanni in Campo Orazio, in the territory of Poli, as the place where the bloody battle took place.