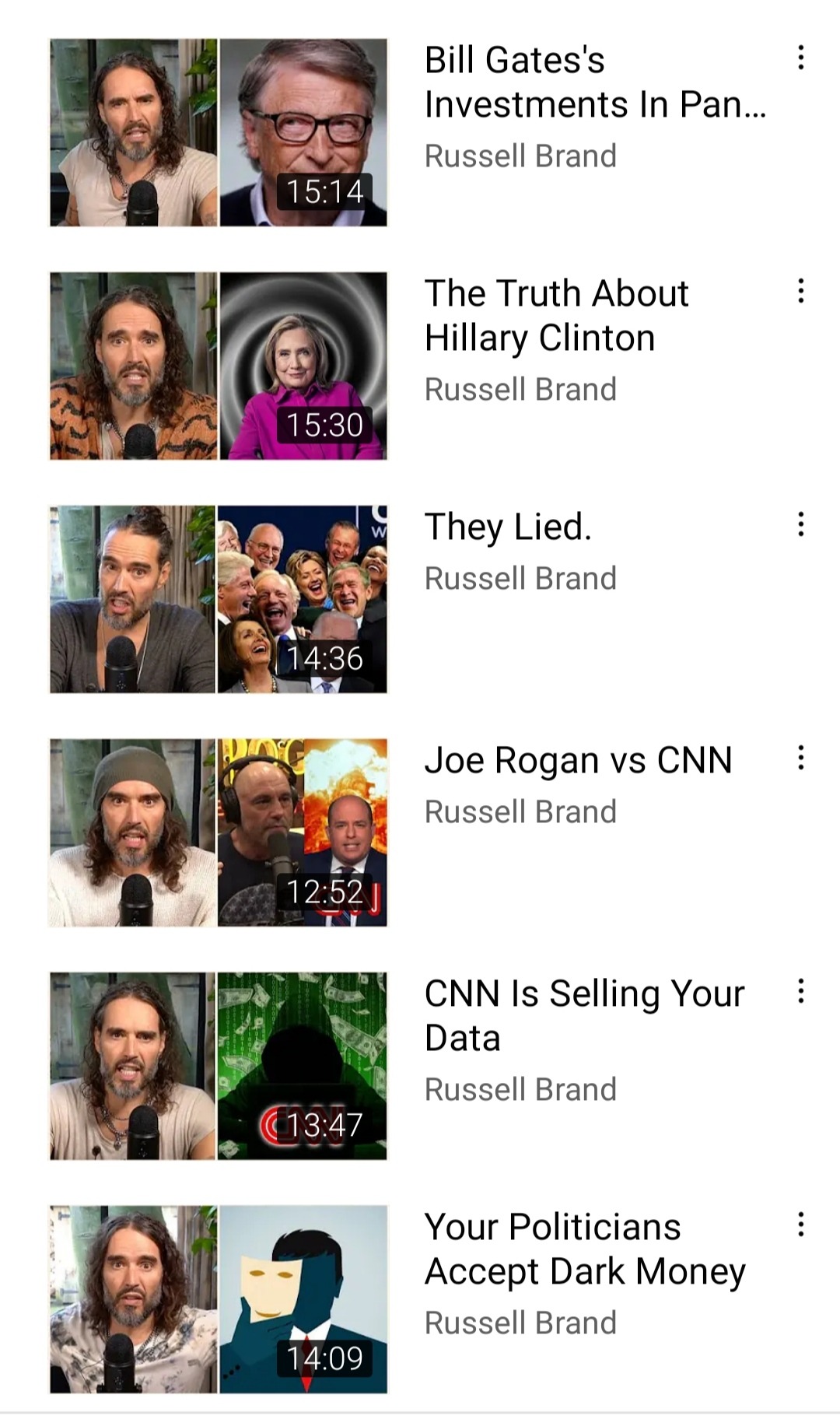 Has Russell Brand decided that conspiracy theories aren’t enough for him anymore?
After having embraced a career as an actor and then as a comedian, Russell Brand’s favorite pastime now consists of peddling conspiracy theories on a daily basis on his YT channel, which has 5.85 million subscribers. And it works !!
A soft beard, long hair, colorful floral shirts, tattoos.
Russell looks pretty cool looking, nonconformist he kinda gives the impression of not caring about his image.
No wonder his YT channel exploded.
Videos with alarming titles:
● THE GREAT RESET IS REAL!
● It Was All AF*cking Lie
● They Don’t Want You To Know This
● We Have Been Lied To…
● This Is WHY They Censor Trump

With one video every 24 hours and without any platform moderation, Russell Brand’s massive YT channel has become a hotbed of online misinformation.
Everything goes:

His monetized videos generate millions of views on YT. The comments section turns into a real misinformation chat.
Russell Brand has repeatedly said in interviews that he is not a conspiracy theorist, but he believes in the existence of a new world order that hides the truth from us.

Freewheeling Russell Brand has become an iconic figure in online misinformation.
Russell plays with fear. Capitalized words like “IMPORTANT” in the titles of his videos sound like a scare call to his audience. On his YT channel, the “War” playlist includes around thirty videos on the subject of the war in Ukraine.
Russell shares conspiracy theories around Russia and Ukraine including that coming from Russian propaganda.

Following a video that went viral on his YT channel titled: “Trump was right…”, Russell Brand claims that Hillary Clinton worked with Russia to create a conspiracy. Russell Brand fans then start shouting loud and clear on social media that Russell is going off the rails and head over heels since flirting with right-wing conspiracies.

Russell Brand as a conspiracy theorist shares with us through his videos an anxiety-provoking vision of life and the future.
His Guru side is above, he alone knows the truth and invites us through his words to find the path of evidence…

Spirituality has always been Russell Brand’s stock in trade. In the 2000s, Los Angeles celebrities made Kundalini Yoga a mainstream and fashionable yoga trend.
In all the hot spots, Kundalini yoga studios are popping up and making a splash.
It is in this context that Russell Brand decides to become a Kundalini Yoga instructor and to open his own studio.
In several interviews, the former drug addict explains how Kundalini yoga helped him manage his addiction to toxic substances.
Strangely, Russell strives to compare each Yoga family to a class of drugs:

Even more surprisingly, in one of his YouTube videos titled “Energy Booster” .
During a breathing exercise, Russell Brand asks Kundalini yoga practitioners to inhale “like a crack addict” .

These are voluntary hyperventilations that give way to a large secretion of adrenaline, this discharge of adrenaline leads to a feeling of euphoria, in some cases the adrenaline gives a feeling of power and power.
In Kundalini Yoga classes, it is this hypersecretion of adrenaline that is often considered to be the release of Kundalini, an energy capable of awakening all of our abilities, whole classes of voluntary hyperventilation are taught there. .
In the long term, serious problems can arise:
hyperventilation lowers the irrigation of the brain which subsequently may suffer.
Russell Brand is very close to Tej Kaur Khalsa it is she who initiated and affiliated him with Kundalini Bhajan yoga.
Tej Kaur Khalsa was a student of Yogi Bhajan, founder and importer of Kundalini yoga.

Since 2020, revelations made about Guru Yogi Bhajan have tainted and divided the Kundalini community.
For ethical reasons, some instructors have even decided to stop teaching Kundalini yoga.
Bhajan accused of rapepsychological abuse, pedophilia, embezzlement and cultural appropriation.

The financial empire named “3H0” already sealed under the inheritance of Bhajan, the market being still very juicy, the heirs of the lineage Bhajan prefer them to adopt the policy of the ostrich. To this day, Tel Kaur Khalsa does not recognize the victims of its guru Yogi Bhajan.

The Sikh community has already been hurt once by Yogi Bhajan. Recall that Bhajan hijacked a 550-year-old religion; the Sikhism as a Commodity.
The Sikh community around the world has had to face enormous consequences.

This same Sikh community finds itself ridiculed a second time by Russell Brand who, since his retraining as a Kundalini yoga teacher, proudly wears a Sikh religious tattoo.
“Sikhs are asking Russell Brand to remove the Sikh Kanda tattoo on his arm, Sikhs don’t want Russell Brand representing Sikhism in his sex crazy yoga classes!” .

On his Instagram account with 2.9 million subscribers, Russell Brand shares the same story at least five times a day.
A “GET YOUR TICKET” link to buy tickets for his new spiritual show called “33”
The number 33 corresponds to the number of tattoos he has on his body as well as the age of death of Jesus, moreover the poster of his tour “33” represents Russell in Christ surrounded and adored by his public.

Russell, from the top of his platform, looks down at his audience. It talks about prophecy, political ideals, spirituality, parenthood. Sometimes he approaches his audience sitting cross-legged, showing a posture of modesty.
Russell Brand also stated in a interview : “The teachings of Christ are more relevant now than they ever were summer” .
He also told the Christian Post in 2014 have “changed his habits” , and be “never so close to jesus“.

At the end of his show, Russell Brand likes to give his fans a hug by throwing himself into the crowd as an imitation of the “darshan“, technique used by a famous nationalist Guru “Amma”.

Amma’s legend began to crumble after the release of the book by Gail Tredwell who served Amma for 19 years at her ashram in India.
otherwise Russell Brand knows Amma wellhe stayed several times in his ashram in Kerala.
Russell Brand likes to describe his show as
“A celebration towards our return to freedom, an opportunity for people to come together”
Note that the ticket for his show 33 costs on average 25 euros and goes up to 40 euros depending on the location chosen.
The merchandising tab on Russell’s site offers fans of Tour 33 “Stay Free” Tee Shirts for 32 euros.

In September, on his Facebook accountRussell Brand posts a video where he invites everyone to join a spiritual community:
“Are you sick because of a civilization based on lies, chaos, treachery, deceptions, illusions. Do you want to do a break to get out of the matrix (…) come, join us this is just the beginning” .

This event called “CommunityFestival” will offer for 2 days conferences, spiritual practices, ice baths, holistic therapies.
Upon arriving on site, guests are given a necklace and then must pass under an entrance arch where it is inscribed in large “Community” .
Afterwards, they get a small booklet, a guide entitled: Welcome to the community.

At the head of this Festival, three charismatic gurus with strong conviction who, for two days, will be able to transmit to their faithful.
This trio is made up of Russell Brand, remember that Russell tends to place himself as a prophet by inventing enemies, plots, imaginary external threats.
He will be supported by Wim Hof, the most famous refrigeration guru in the world. His method promises benefits but carries health risks and is not suitable or safe for everyone.
What we often forget is that people died by doing the breathing exercises sold by Wim Hof.

We will also find Vandana Shiva, a famous conspiracy guru at the heart of the anti-GMO movement, posing as a quantum physicist, accused of creating famine in Sri Lanka.

For this occasion, an imposing stage named Awaken is created. She will be able to receive the trio, the meditations, the ice baths, the breathing exercises will follow each other frantically. The public is hypnotized, obsessed, in a trance under the speech of Wim Hof.
Booklets “Admitting vulnerability, accepting the validity of opposing viewpoints” are distributed to the crowd …

To date, his movement does not seem to have crossed the Atlantic to invade France despite the attraction of part of the population for this kind of practice. A drift to follow closely.