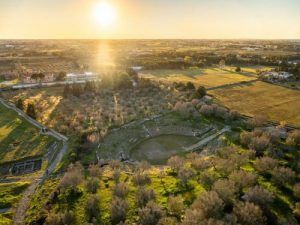 The weather remains mild and the weekend tastes like summer. Therefore, going outside the city, excursions and guided tours continue to animate Puglia. Here is the traditional appointment with a reminder on a series of initiatives and events to spend a real Ecoweekend.

A journey on foot told along the streets of the sky of Guaceto, a special suitcase in your hands, in the enchantment of the evening illuminated by the full moon that marks the end of summer. Two guides to mark the way: an amateur astronomer to reveal the secrets of the cosmos, the movements of the stars and the influences of the great Harvest Moon, a narrator to whisper wonder and poetry in the realm of GawSit, where the invisible threads intertwine and appear between the reeds, the grains of sand and the sky. He is called precisely “The suitcases of invisible threads” the evening excursion scheduled in the Torre Guaceto nature reserve (Carovigno) Saturday 10 September, promoted by the Thalassia cooperative. Info 331 92 77 579 or info@cooperativathalassia.it

Wine and oil in the Euro-Mediterranean civilization

In Manduria study day “Wine and oil in the Euro-Mediterranean civilization”: appointment on Saturday 10 September, starting at 9.30, at the Produttori Vini Manduria winery, in via Fabio Massimo 19 in Manduria (Ta).

At the center of the reflections will be the two great products of the Salento and Apulian agricultural tradition and the relative economic, social, cultural implications, over the centuries, from the ancient world to the present day. The meeting constitutes the third opportunity for in-depth study of issues related to the history of wine, the related interactions with other productions, and its contribution to the definition of a European and Mediterranean identity. Info: www.museodelprimitivo.it/

Guided tours of the Archaeological Park of Rudiae

On Saturday 10 and Sunday 11 September activities continue in the Archaeological Park of Rudiae in Lecce. In fact, since last weekend, the park has been open and usable again. For the next two years, in fact, the spin off of the University of Salento, coordinated by the archaeologists Pio Panarelli and Dario Corritore, will deal (after a public evidence procedure and after having performed this similar service in the previous “experimental” phase) guided tour and enhancement services for the whole area on the basis of the agreement signed last May by the superintendent Francesca Riccio and the mayor of Lecce Carlo Salvemini.

Saturday 10 September (16:30 and 18 – admission 10 euros and 8 euros) Improvvisart will propose the theatrical guided tour “A journey through time”. The actresses and actors will revive some of the most important historical characters of the area, all in period clothing, and will lead visitors to discover the beauty of a place of excellence, its stories and its anecdotes. Real theatrical incursions will surprise those present and, thanks to the possible interaction with the actors themselves, the public will be able to live the experience of the theatrical visit in an active and participatory way. Info www.parcoarcheologicorudiae.it

A day on horseback, starting from Posta Ruggiano to arrive in the heart of Bosco Quarto, the second largest in the Gargano after the Umbra Forest. It is the original proposal for Sunday 11th September signed by Gargano Natour. After the visit and a lunch together, in the afternoon the ride ends, of about 20km, returning to Posta Ruggiano. The experience is suitable for those who have never been on horseback: thanks to the expert trainers of Posta Ruggiano and the meek Murgese horses, in fact, it will be possible to learn the basics of the relationship with this splendid animal, which has always been a faithful companion of man. Info on this excursion and the other weekend offers: garganonatour.it

“Sensory Paths of the Murgian Tradition”

Two days to discover the sensory paths of the Murgian Tradition. Saturday at 10 am at the headquarters of the Bonomo Research in Agriculture Foundation in Castel del Monte, the presentation of the “Higher Technician of the Enhancement of Food and Wine Heritage” course of the ITS ACADEMY Foundation ITS – Agroalimentare Puglia, the musical show of Iroai and aperitif with wines , oils and typical local products.

Sunday 11th September guided walk to the Unesco site Castel del Monte, trekking in the Castel del Monte area, drawing workshop for children “Federico and the mysterious castle”, convivial banquet “At the table of the farmer” by the bistro of Casa Sgarra, traditional Andriese ice cream by FIPE Bar and Pastry – Confcommercio Andria

The Pro Loco of Latiano proposes for Sunday 11 September 2022, the XXVII edition of ‘Latiano on two wheels’. In a very particular historical period, the ultimate goal is to leave the cars, put a backpack on your shoulder and “pedal”, discovering and rediscovering the beauties of our territory.
The message we want to convey, in terms of sustainable mobility, is therefore to use cars as little as possible and, at the same time, encourage the use of bicycles so as to create a model of economic and social development that focuses on respect for nature.

Until the day of the initiative, interested citizens will be able to collect their T-shirt at the Pro Loco headquarters, thus creating a “colorful” procession that will start from Piazza Umberto I and will move along the streets of the city, until reaching the pre-established destination. For the entire duration of the walk, which will start on the afternoon of Sunday 11 September (meeting scheduled for 4.30 pm), participants will be able to totally immerse themselves in nature, researching and rediscovering farms, trulli, ancient olive trees, rock churches, archaeological parks and all this. that the territory has to offer. Info: www.prolocolatiano.it/

The 10th edition of “lineamediterranea” 2022 continues with the Concert at the sea of ​​Jazz / Rock and World Music: Peace, love and music, an emotional tribute to the sea and to everything it represents, with Alessio Alba (sarod), Marco de Tilla (bass), Enrico Alba (guitar), Sanjay Kansa Banik (tabla), Simone Prattico (drums). Appointment set for Sunday 11 September, at 9:30 pm in the Hotel Lido Torre Egnazia – Chapter of Monopoli. Admission is free. For information and to participate in the events, contact the number 389/4532156 via whatsapp

A theater in the woods in Trepuzzi

In the grove and in the Trepuzzi amphitheater with the workshops and shows for the whole family of “A theater in the woods”, the appointments of “Legami_Teatri del nord Salento”an artistic project promoted by Factory Compagnia Transadriatica in collaboration with Blablabla, the Municipality of Trepuzzi and the Puglia Region.

Sunday 11 September the second evening will start at 18:30 (free admission – max 15 people) from the Grove of San Vito with “To embrace the trees”, a workshop by BlaBlaBla. Following from 8 pm (admission 2 euro – info and reservations 3207087223 – 3403129308) the show “Corri, Dafne” by Factory Compagnia Transadriatica and Fabric Corporeo by and with Ilaria Carlucci directed by Alberto Cacopardi. Info. 3207087223.

The “long summer in Bari” is not over yet. As part of the program Le due Bari for the review “There is an air of celebration“, Edited by Coop. Theaters of BariKismet Theater, Saturday September 10at 7 pm, show “Feast of All Saints” of the Malalingua company (with Marianna De Pinto, Antonella Civale, Vincenzo Toma, Marco Grossi, Luca Valiano). The intent of the show is to awaken the knowledge of these ancient models, of these human beings, men before they are saints, men in their relationship with life and with spirituality, with all their fears and their contradictions.

The same review also proposes Sunday 11 Septemberat 9 pm, the show “The arts have no barriers“, directed by Domenico Iannone: it is the staging of a theatrical work between subjects with psycho / aptitude difficulties and able-bodied to present works from original texts or transpositions from well-known literary texts with music. The project is not aimed at the “redemption” of “minor” subjects, but simply at merging different languages ​​of different abilities and attitudes, among them. Info https://www.leduebari.it/.

Finally, for “Bari seen from the moon“, Edited by The Amoroso, in cortile parish of the Redeemer, Saturday 10 is Sunday Sept. 11at 8.30 pm, the children’s show “Totò of the trees”, Of the company Kuziba Theater. Inside the smallest theater in the world, the adventures of a stubborn boy who climbed a tree and never came down. Discovering how the story of the Baron Rampante was born dragged by Totò and his bizarre family of actors.

The appointment is at the west entrance (Specchiarica side) of the equipped path of the Salina, under the new lookout tower. Reservation is not necessary. The path, about one kilometer long, is equipped with didactic tables on plants and animals, two watch towers and a particular outdoor classroom (Pink Gold Teaching Room). At the beginning of the path there will be experts from the local Wildlife Reception Center who from the lookout tower will indicate the correct way to observe animals in protected environments such as the one hosting the initiative. Observation will be facilitated by the use of adequate birdwatching equipment. Info: 331.9768753

In the vast program of excursion proposals Murgia Enjoyorganized throughout the summer starting at dusk, you could not miss a stop at the Municipal Wood of Bitonto which extends for 110 hectares in the districts of Murgia del Ceraso and Murgia Rogadeo, also known as “Murgia di Città” and in which for years the Murgia Enjoy members have supported those of Fare Verde di Bitonto, organizers of several unforgettable editions of the “White Night of the Wood of Bitonto”.
In the wood, from a naturalistic point of view, it is possible to observe both the typical plants of the pseudosteppa (ferula, asphodels, scilla, thyme, numerous wild orchids, rue, etc.) and the reforestation trees of the 70s populated by foxes, stone martens and wild boars. The activity is scheduled Saturday 10 September from 18:30 to 23:30. Info www.murgiaenjoy.it

At the weekend there is also space for an awareness raising initiative in the Apulian capital. Saturday 10 September, at 11.30, on the beach of San Cataldo, in the Marconi district, a “plastic-eating fish” will be inaugurated installed thanks to the commitment of the San Cataldo Resident Association and the support of Coop Alleanza 3.0, with the collaboration of the Environment Department of the Municipality of Bari.
It is a fish-shaped structure, used for the separate collection of plastic, which has a double value. In addition to the functional one, in fact, it has an educational one: through the image of the fish full of plastic, it intends to offer food for thought on the theme of marine pollution caused by plastic materials and their entry into the food chain. The municipal councilor for the Environment, the president of Legacoop Puglia, Carmelo Rollo, the president of the Area Council of Coop members Lorenzo Marzulli and the representatives of the Resident associations of San Cataldo will participate in the event to raise awareness of the protection of the environment and biodiversity, Retake and Legambiente Puglia.

Between woods and paths, it is an Ecoweekend to be experienced also on horseback and by bike