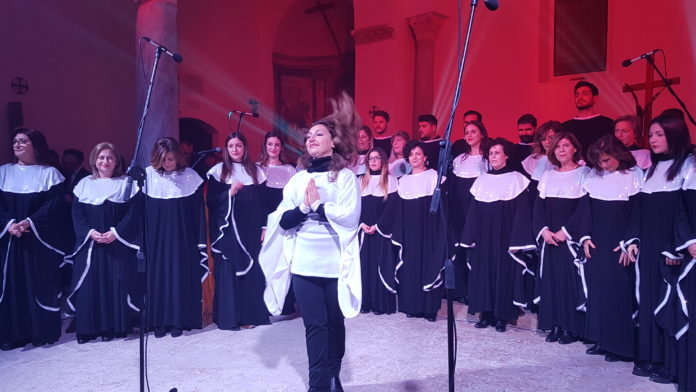 Ascent of the Scalzi, 17 GAETA

by the CFA Music Academy of the Phlegraean Fields

in collaboration with ATI Macellum

Gospel atmospheres is the Gospel review curated by CFA Music Academy of Campi Flegrei which takes place on Friday 8 July at the Macellum Tempio di Serapide di Pozzuoli (via Serapide, 13) at 19.30 and Saturday 9 at the church of Santa Maria di Porto Salvo (Salita degli Scalzi, 17) in Gaeta at 19.30.

Forty choristers from Eyael, a choir born from the merger of the Città di Pozzuoli choir and the Città di Gaeta choir, will give life to a concert in which the disruptive energy of the gospel will be the protagonist. The pieces included in the lineup are: Amen, My lord kumbaja, How Lord Excellent, I won’t go back by William McDowell, Thank you Jesus, Ride on King Jesus, The Battle of Jericho, Adiemus.

“I’m very happy – declares Enrica Di Martinoartistic director of the exhibition and president of the CFA. – of this review because the protagonists are two choirs that will perform together for the first time. The strength of the Gospel lies precisely in its ability to unite people; the songs we offer underline the sense of brotherhood, of sharing typical of this music. As if by magic, as always happens in the Gospel, the many components come together in a single voice. Already in the experience of‘International gospel days, where national and international choirs have performed, I have noticed how the peculiarities of the individuals blend with those of the other participants, giving life to a true artistic intertwining particularly appreciated by the public. Thanks to Ati Macellum, which manages the Macellum of Pozzuoli, we return to this fantastic place that provides a unique setting. In Gaeta, the church of Santa Maria di Portosalvo, an evocative location, will host us and give us the energy to make our music known ”.

Notes on the gospel: When the Blacks from the African continent, in the seventeenth and eighteenth centuries, were brought into slavery to work in the cotton plantations of the southern United States, their music accompanied them and to alleviate the fatigue of that life, plantation songs were born from which the work songs and calls came, songs that described their daily life in the fields and to communicate with each other.
The Baptist and Methodist preachers from Europe who converted them to Christianity found fertile ground in the strong spirituality of the blacks and in their music. Thus were born the Spirituals, a Christian reworking of African ritual music. With the end of slavery, 1865, there is a constant attempt to modernize the spirituals and thus favor their diffusion and commercialization, and a new musical genre is born whose rise was unstoppable, and soon, thanks also to the advent and to the diffusion of radios, turntables and tours, he crossed American borders.

Gospel music is typically choral music. Since about 1960, successfully combining religious lyrics with contemporary rock rhythms and being accompanied by bass and drums, the Gospel choirs come out of the churches meeting that success that is still deservedly recognized today.

The concert program is designed to enhance the sense of the gospel which is a music that tells the pain, difficulties and frustrations of everyday life, but also the faith and the hope of liberation and redemption. The two faces, pain and hope, always walk, just as it happens for us today. From the pandemic, immense and excruciating pain, we are trying to get out, hopefully for a better world.

The concert on July 8 will be preceded by the presentation of the book The journey of Apion by architect Maria Caputi.

From the sands of the Fayyum oasis a team of archaeologists finds a casket with two papyri, two letters sent home by a young sailor. From here the journey of the young Apion starts, who moves from the coasts of Egypt to enlist in the Classis Praetoria Misenensis, the Roman imperial fleet stationed in Miseno, without imagining that, in addition to knowing a new land, new friends and perhaps even a great love, he will even be called to defend the life of the Emperor. Talk to the author

The event on 8 July is organized in collaboration with the Ati Macellum.

Admission to the concert on July 9 is free.

MAESTRA ENRICA DI MARTINO: Graduated in singing at the San Pietro a Majella conservatory in Naples, graduated in choral conducting and composition at the Domenico Cimarosa conservatory in Avellino, she boasts national and European experience; she has in fact received several awards such as the second place in the GB Pergolesi Competition, the first place at “Competition AMA Campi Flegrei”, Scholarship Silvia Geszty in Neustad in Germany, third place in the “Caruso De Lucia International Competition”. He has the CFP and EVT method qualification for teaching modern singing and vocal setting for actors. Many theatrical collaborations in Italy and Europe. As a vocal trainer and teacher she has been working in Campania schools and theaters for over twenty years.

CFA Musical Academy of the Phlegraean Fields directed by M ° Enrica Di Martino was born in 1998 and has participated in important exhibitions throughout Italy. The purpose of the CFA is the dissemination of music and enhancement of musical talents through innovative training and teaching techniques that the teachers of the school experiment, after having trained in an international context. Since its foundation, the Academy has received critical and public acclaim for the attention dedicated to the performances with attention to every detail and, above all, for the exchanges with European and international musical realities.

CHORUS CITY OF POZZUOLI founded in 2014 and made up of fifty elements, the city of Pozzuoli choir was born almost from a bet by the teacher Di Martino; in the path of spreading the gospel in schools, which is always the result of the interactions between teachers, pupils and parents, the enthusiasm of the teachers was always enormous. From this momentum the choir was born, which boasts various professionals in different disciplines who interact with skill, enriching the history of the choir with their life experience. Among the objectives of the choir is to publish a book “singing is a right” where it is highlighted that choral singing is an activity that must not be reserved exclusively for the elect and therefore for those who have musical potential but is for all and that the important thing is to identify their location to reap their benefits.

CITY OF GAETA CHOIR born in 2021 to be able to experience the city of Pozzuoli Choir in another city. The enthusiasm immediately encountered in the Lazio city was such as to overcome the problems linked to the pandemic. After a few meetings, the choir members managed to interpret gospel songs that were certainly not easy. Music, once again, overcomes all difficulties and unites with its aggregation force.

ATI MACELLUM: The Land of Myths is the leader of the Temporary Business Association “Macellum” with Amartea APS, Aporema ONLUS and Graficamente Srl. The ATI is awarded the first Public-Private Special Partnership in Italy for the management of the so-called Temple of Serapis, the ancient food market of Pozzuoli, promoted by Archaeological Park of the Phlegraean Fields. The project involves the return to the community of one of the most important Roman monuments in Italy for its enormous archaeological, historical, scientific and iconographic value. The objective of the Partnership is to increase knowledge of the site and to raise awareness of the cultural heritage of the Phlegraean territory, also through the improvement of the methods of use of its archaeological sites.