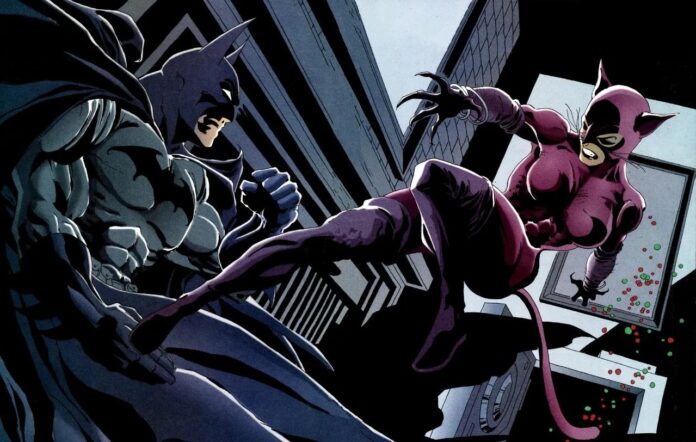 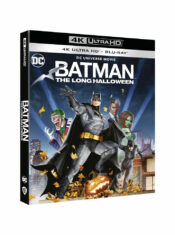 Dark times in Gotham City. Held hostage by the powerful Falcone family, the city is plagued by crime and corruption. To this chaos is added the fact that the mysterious killer Holiday attacks the underworld leaving a wind of terror blowing on the city… as well as many corpses. Batman, Captain James Gordon and District Attorney Harvey Dent begin a real race against time to avoid any next unfortunate event…

With more than 40 animated feature films to their credit, the creatives at DC Comics and Warner Bros. Animation begin to know their subject well. Enjoying the support and admiration of many fans around the world, they even seem to be, thanks to their creativity and their constantly renewed audacity, able to bring to DC an unexpected momentum. And between the original projects, the little guys in the branch DC Universe Animated Original Movies regularly deliver adaptations of famous comics.

Batman: The Long Halloween is the meeting by DC Comics and Warner Bros. of 42th and 43th animated feature films to be released at DC. This is the adaptation of a mini-series of comics in 13 issues, signed Jeph Loeb (screenplay) and Tim Sale (drawings). Released in 1996/1997 in the United States (1997/98 in France), the series quickly established itself as an immediate classic, the spiritual successor to Frank Miller and David Mazzuchelli on “Batman: Year One” (1987), of which it is a recognized sequel. But of course, “A Long Halloween” approximates other grand graphic narratives set in Gotham, such as “Dark Knight Returns” (Frank Miller, 1986), “The Killing Joke” (Alan Moore / Brian Bolland, 1988) or even “A bereavement in the family” (Jim Starlin / Jim Aparo, 1989). All of them have also been adapted as animated films.

Like the graphic novel from which it is adapted, Batman: The Long Halloween depicts, against the backdrop of a bloody war between mafia families, several famous characters from the Dark Knight universe: Harvey Dent, Gotham prosecutor, who will become Two-Face. Catwoman, who has a troubled relationship with Batman/Bruce Wayne. Jim Gordon, who works alongside Batman to uncover the identity of “Holiday”, a serial killer who murders his victims only on holidays. Other more or less established “villains” also appear throughout the plot: the Joker, the Mad Hatter, the Scarecrow, Poison Ivy and the Riddler rub shoulders with some bad guys little known to the general public, such as Calendar Man (whose modus operandi is quite similar to that of “Holiday”) or Solomon Grundy, the giant zombie who guards the sewers of Gotham.

As usual with films from the bosom of Warner Bros. Animation, Batman: The Long Halloween is a production as neat as it is elegant, in line with the graphic continuity taken by animated films from DC Comics from Superman: Man of Tomorrow – the drawings are more massive, the contours thickened, all giving the viewer the impression of being part of a true tradition of “comic book” drawing. Even if this assertion does not mean much in the absolute (each cartoonist develops indeed a style of his own), we imply by it that the general design of cartoons from DC / Warner seems less influenced than before by animation from Japan, which we really felt especially on most of the films produced during the 2010 decade.

The feature chosen here for the adaptation of Tim Sale’s grandiose flat tints certainly has something to destabilize at first, even if the credits pay homage to the graphic novel by taking illustrations from the comics as they are. However, we will get used to the new appearance of the characters fairly quickly. On the screenplay side, Tim Sheridan’s work to “condense” the first third of the mini-series into a film of just under an hour and a half is quite remarkable: the atmosphere and the calculated slowness of the story are well transcribed. For those familiar with the source work, the first part of Batman: The Long Halloween stops at the crime committed by Holiday on New Year’s Eve. The idea of ​​splitting the story in two at this precise moment is, narratively, a good idea: we are thus witnessing the disappointment of Batman who operates as a kind of pretty deft cliffhanger.

The adaptation is therefore quite excellent. Batman: The Long Halloween takes the time to establish the universe as well as the characters; only a few cuts have been made compared to the comics, limiting the secondary plots a little. Given the density of the source material, it seems like the decision to split the anime adaptation of the tale into two parts is perfectly justified. The second part therefore begins almost immediately after the conclusion of the first – we simply jump in time from New Year’s Eve to Valentine’s Day. The second act of this division made by the authors of Batman: The Long Halloween however, requires them to opt for a much more sustained pace than its predecessor in terms of action and twists. Skilfully using the foundations laid by the first episode, the film connects moments of bravery while orchestrating, in the background, Harvey Dent’s slow descent into hell and the birth of Two-Face. The human drama is perfectly balanced, and the story finds its balance in several other narrative arcs: we think in particular of the difficult relationship between Bruce Wayne and Selina Kyle, or even the curious fate of Solomon Grundy or the Falcone family. It should also be noted that Tim Sheridan’s script delves a little more into the motivations of the mysterious “Holiday”, but we let you discover to what extent.

“A Long Halloween” is truly a slow-burning narrative, which builds in intensity as the plot progresses. Thus, throughout his adventures, Batman: The Long Halloween is therefore gradually establishing itself as a top-notch animated film, and undoubtedly one of the stand-alone films in the universe DC most memorable and successful. The whole thing is remarkably intense, and the desperate darkness of the whole thing has earned it an “R”, extremely rare in the field of animation, but probably deserved – it is clearly not a question of a film for young children. From a purely technical point of view, the animation is solid, and even allows itself some more experimental and frankly formidable passages – one thinks in particular of the exploration of the terrors of Bruce Wayne during his confrontation with the Scarecrow.

The voice cast is almost entirely made up of newcomers, but they are up to our expectations. So here we find Jensen Ackles (supernatural) as Batman, Naya Rivera (Glee) in that of Catwoman, Josh Duhamel (transformers) in the shoes of Harvey Dent and the excellent Billy Burke (Twilight) in Gordon’s. Troy Baker takes over from Mark Hamill as the Joker, but also does just fine. Note that it says that Batman: The Long Halloween unfortunately constitutes the last role of Naya Rivera, who died by drowning in the summer of 2020 at Lake Piru, California, while swimming with her four-year-old son, Josey, who was found alone on their rental boat.

Almost a year and a half after the successive releases of the two episodes of Batman: The Long Halloween in Blu-ray format, Warner Bros. invites us today to rediscover them together and in 4K Ultra HD Blu-ray format. And the definition is always remarkably precise: the film was in fact shot in 2K, so this new transfer will actually be an upscaled presentation of the film, nevertheless benefiting from a marked improvement in contrasts and colors thanks to technology HDR10. The black levels will therefore be sharper, allowing the film to acquire a new “depth”, in the sense that the foreground and background layers are more pronounced. HDR10 also allows the most vivid colors to literally explode on screen. On the sound side, the VO is offered in a powerful mix DTS-HD Master Audio 5.1 who is doing the djaube without the shadow of a problem on the horizon. The VO will in fact be finer and more spectacular than the VF, mixed in Dolby Digital 5.1. However, the latter generally does not have to be ashamed of its technical, dynamic and enveloping performance as hell: very good work.

On the side of the supplements, we will find all the supplements available on the Blu-ray editions already available. On the Blu-ray of Batman: The Long Halloween – Part Onethe publisher offers us a preview of upcoming animated feature DCto know Batman: The Long Halloween – Part Two of course (9 minutes). We will discover a handful of images from the film, but in order to keep the suspense, Warner especially offers us a lot of still images and concept-arts, which will be accompanied by interviews with some key members of the team and of some dubbing actors. We will then continue with thepreview of Batman: Dark Knight Returns – Part One (13 minutes) and thepreview of Batman: Gotham by Gaslight (9 minutes), two older films, to focus on the short film The losers (16 minutes, HD / VOST). From the series DC Showcase, The losers is adapted from a series of comics from the 70s, published in France out of order and in cropped black and white versions, notably in the collection “Brûlant” by Aredit / Artima. It’s a war story with a touch of fantasy; the short film thus depicts a fight against dinosaurs. It’s quite fun on its own, but not very original, and the animation is very stiff, which won’t necessarily make it essential. We will then end with, in the Warner Bros Archive, two episodes of Batman: The Animated Series in HD and VOST: Merry Christmas, Batman (season 1, episode 2) and It’s never too late (season 1, episode 12).

On the Blu-ray of Batman: The Long Halloween – Part Two, Warner Bros. first offers us a very amusing short film collection anime DC Showcase : Blue Beetle (15 minutes). Adapted from a series of comics from the 1940s, this cartoon is built on the model of episodes of the series Batman from the 60s. We will then continue with the traditional preview of upcoming animated feature DCto know Injustice (8 minutes). We will discover some images of the film, Concept-Arts and storyboards, but also short interviews with Ernie Altbacker (screenwriter), Matt Peters (director), Kevin Pollak (voice of the Joker) or Rick Morales (producer). We will go a little fasterpreview of Batman: Dark Knight Returns – Part Two (7 minutes) and thepreview of Batman: Silence (9 minutes), two older films, and we’ll end with, in the archives Warner Bros., two episodes of Batman: The Animated Series in HD and VOST: Double Game, first part (season 1, episode 10) and Double Game, part two (season 1, episode 11).

Finally, on the 4K Ultra HD Blu-ray itself, we will also find a all new making of (25 minutes), which will first return to the comic strip by Jeph Loeb and Tim Sale at the source of Batman: The Long Halloween, as well as the adaptation work that was necessary to bring it to the big screen. References to Film Noir will also be mentioned. Among the speakers, we note the presence of Jeph Loeb, screenwriter of the comics, but also of Tim Sheridan, screenwriter of the film. Interesting !