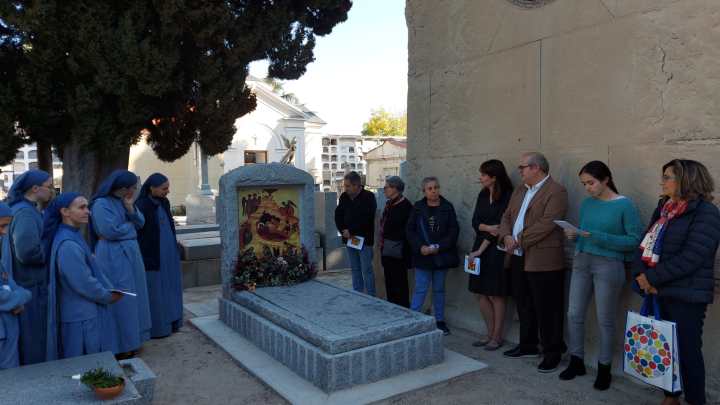 Interview with Helena Acín, initiator of an integral support service for parents who lose a child in gestation

Living the death of a gestating human being as a way to heaven is what a new Catholic funeral agency in Madrid (Spain) offers. The founder, Helena Acín, explains to Aleteia his work.

How did you manage to start this funeral service for the children?

Parents called us because their daughter had died at 9 weeks of gestation, and they wanted to bury her but didn’t know how to do it.

For us it was the first time people had called us with a daughter who died in gestation, and we learned with them.

At first we tried to follow the procedure we adopt with adults, but we were faced with surprising things that helped us to take on the difficult situation these parents are experiencing.

In Spain, at the health level, these children are considered “human remains”.

A child born lifeless cannot be entered in the civil register. It can be done starting from the 26th week, but in a book called “Book of abortive creatures”. Just listening to this definition moves the bowels …

Parents find it difficult to formulate the loss of a child around them. Friends cannot accompany them because often the pregnancy had not yet been announced.

María puerta del paraíso was born to accompany parents who want to bury their child.

We have adapted everything so that parents could accompany their child with all affection in this passage and entrust him to the hands of the Father.

We go to the hospital, we take the baby, we wrap it in a cloth, we put it in a very simple wooden crate.

We accompany parents in consolation and hope, and invite them to name their baby and spend time with him before leaving.

We give them a small notebook to watch over their child, if they want to also at home with a Christmas-inspired prayer.

We bury it. We purchased a specific burial for these children in a cemetery in Madrid. There they can remember them and go to pray.

This is a very specific funeral service, right?

The funeral system is designed for adults, and in some cases for children, but not to accommodate this reality.

There are no coffins of this size, the burials are for adults, the funeral machines are immense …

It is as if you are looking for clothes for your baby of a few months and find only for babies of one year. It’s all a bit disproportionate.

We have adapted everything to the reality of such young children.

It must be difficult for parents …

For parents, the loss of a child is a huge, very painful shock. And to this is added the fact that the surrounding environment does not recognize motherhood and paternity.

Parents say “He is my son, I want to bury him!”, But the answer they find is “Why? He is a human remnant ”.

And if they want to give their surname to their child and that it emerges from the civil register, they are faced with the fact that they do not have the right.

When a child dies before birth, it is a difficult moment in which there is a need for welcome and accompaniment, and what is found is instead hostile territory.

However, many parents have started a journey to recognize this reality.

The international day of gestational and perinatal death was celebrated on October 15, especially promoted by fathers and mothers who have gone through this experience. There have been over 100 events in Spain alone.

It is a question of recognizing them as any child. Institutional and social recognition is needed.

In such a case, can’t parents bury their child on their own?

In Spain, when a child is born in a hospital, a funeral agency is needed to be able to take the body and be able to bury or cremate it.

Was it very difficult to start the business of this funeral home?

I felt called to offer this light of hope, and for me it was like doing a practical master on how to create a funeral home. I walked this path with the help of many people.

Did something similar already exist or is it a new service?

This service was not designed with a market study. It was born as a response to a need. I got a request from the parents and I wanted to help them.

And in this period I have not found anything like it, and as far as I know there is nothing else.

If you call a funeral home it will do the service, but it is difficult for it to be adapted to the reality of such a small child and to include the accompaniment of the parents to welcome the child and deliver it to the Father’s hands, with simple gestures inspired by the liturgy.

At a certain point someone proposed to me to carry out only the spiritual service, to accompany the parents and that’s it, but by giving the funeral service the hope and spirituality that are offered are embodied.

What spirituality do you live in those moments together?

It’s all Christmas inspired. This is not something that I came to as an intellectual conclusion either, it also came from above.

Because when I accompanied the first parents, Juan and Cristina, on July 16, 2020, after having buried their child, I went to a church where the Little Sisters of the Lamb work for the celebration of the feast of Our Lady of Mount Carmel.

The nuns did not know that I had just had an experience of this kind, and as part of the liturgy a Christmas carol was sung which said:

“In the clefts of the rock I found the love of my soul, a newborn child as if buried in a virgin tomb. His face radiated the divine tenderness of the Father ”.

It was just what we had just experienced. We had buried the child in a new grave that the family had.

The appeal to parents is to live the birth of the child into heaven as Mary and Joseph lived the birth of Jesus: from the first moment they knew that that child was not really theirs, but the Son of the Father, called to a life of intimacy with God. .

For this reason, in many Christmas icons the Child Jesus is presented swaddled in a manger that resembles a coffin.

And with rites and liturgy do you transmit this spirituality?

Sometimes there are churches covered in plaster, and when it is removed to restore them, wonderful paintings are discovered.

With the liturgy, with the Word, something similar happens: a mystery of what is happening is revealed.

When parents place their child in a tomb or in an urn (if he is cremated), it is not only an outward physical gesture, but it makes sense to deliver him into the hands of the Father.

All parents are called to accompany their children on their journey to God, but in these parents it is evident why their child has already gone to the Father.

Their Easter is to recognize this passage and to accompany this unique vocation of the child with the certainty that he already contemplates His face.

These parents who lose a child live their vocation as parents to the full. Being a parent means welcoming the child without possessing him, accompanying him in his vocation, which will always surprise.

How do you help parents become aware of this vocation?

In the first place with prayer, because it is God who acts. And in a particular way I invoke Mary and Saint Joseph.

With our presence, with very simple gestures and words inspired by the liturgy, we try to accompany parents and their child.

To those who wish, we propose to watch over their child at home and invite them to pray as a family.

To encourage this, we have prepared a small prayer notebook, inspired by the octave of Christmas.

As far as possible, we invite to celebrate a Mass with the body present and in the cemetery we live the ritual of the funeral.

Even as a Church, we must take steps to better welcome these children and their parents.

There is no specific ritual for babies who die in the womb. There is one for unbaptized babies, but it doesn’t fit totally.

Is this funeral home only for Catholics?

It is a Catholic funeral service that is offered to believers and non-believers alike. Intellectually one can say “I don’t believe”, or reject the Church, but when one is a witness to the beauty and tenderness that are transmitted, this reaches the heart and a glimmer of light opens up, something happens.

And if the experience is lived in another way, isn’t it?

In the liturgy beautiful words are offered, for example “You are my beloved child”, and we invite contemplation by supporting what parents experience.

This does not contradict what they live, it is not discordant. In the liturgy there is room to express pain, joy, anger, anguish; they express themselves in words.

And it is important that there is time for this, that it is welcomed, that one shouts against someone, which can be God or the person who is accompanying us. And let tenderness be experienced.

Otherwise, everything remains inside, because socially one is not authorized to formulate it.

“Forget, get out of the hospital, live…” people are told when they face the death of a child, but a parent always carries it inside.

And if you don’t live or talk about it, there is a risk that the relationship with your partner will weaken. The experience of the parents is that when you live all this together, the couple’s relationship is strengthened.