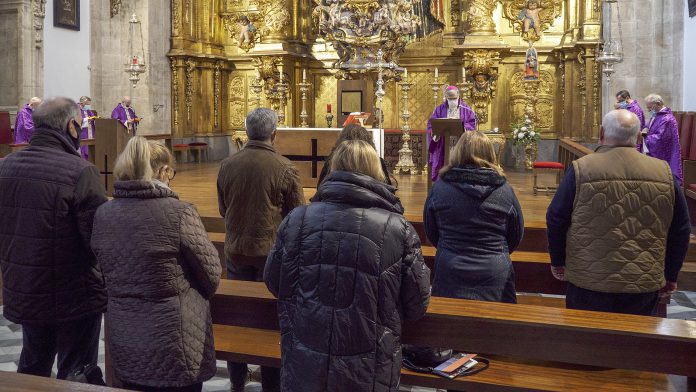 The Episcopal Conference celebrates the Day of the Diocesan Church, in which it puts on the table not only the enormous pastoral and social activity that it carries out throughout the national territory, but also the balance of income and expenses that make this work possible. In Segovia, the diocese announces the figures of an economic balance in the year 2021 balanced in income and expenses, with a budget of 7,382,459 euros that is mainly based both on the allocation that reaches each ecclesiastical province from the hand of the ‘x’ that taxpayers put in their income tax return in favor of the Catholic Church, as well as the contributions of the faithful.

For both concepts, the diocese of Segovia obtains 49.82 percent of its income, the largest being that from the Interdiocesan Common Fund, which left 2.24 million euros in the province, 30.47 percent of the total , while the contributions of the faithful reached 19.35 percent with 1.42 million euros. Both the personal income tax allocation and the contribution of the faithful in the last financial year experienced increases, which in the second case rose to 7.41, undoubtedly motivated by the return of the faithful to the churches after the relaxation of the measures for the pandemic. The tax contribution also grew by a similar percentage, although the number of declarations in favor of the Church fell with respect to previous financial years.

The spectacular increase in the section on donations and legacies is striking in the chapter on income, for which the diocese obtained more than 1.12 million euros last year, and which represents an increase of 52.2 percent. Likewise, the financing needs have also been reduced dramatically, going from just over one million euros registered in 2020 to 172,766 last year.

In the chapter on expenses, the conservation of buildings and the operating expenses of the different services provided by the diocese account for 40.37 percent of the diocesan budget, which last year was allocated for this purpose, 2.98 million euros. The payment of clergy payroll accounted for 22.22 percent, which represents an expense of 1.6 million euros, to which is added that of lay personnel, in which 675,614 euros were spent, 9.15 of the total.

The balance also contemplates the results of other diocesan organizations, in which the difference between income and expenses offers a positive balance in the case of the Diocesan Seminary and the Diocesan Bookstore, and negative in the Priestly House and the House of Spirituality ‘San Frutos’. In the case of the Priestly House, the negative balance between 2020 and 2021 exceeds 138,000 euros, and in that of the House of Spirituality it reaches 39,111; although in the latter case it is necessary to underline the reduction of almost 45 percent compared to 2020, since the income per dining room and residence increased exponentially.

The activity in the Diocesan Seminary generated a positive balance of 23,243 euros, while the Diocesan Bookstore left the red numbers and exceeded 42,291 euros.

As far as diocesan activity is concerned, the diocese began in 2021 to recover the figures from before the pandemic, especially in celebratory activity. Thus, in 2021 the parishes registered a total of 661 baptisms, 873 first communions, 552 confirmations and 196 marriages, in line with the numbers registered before the health crisis.
In pastoral activity, the 337 parishes are served by 144 priests, and have 445 catechists and 77 celebrants of the word. Consecrated life has 316 religious men and women spread over 13 monasteries and convents, and contemplative life has 96 cloistered monks and nuns.
The three religious schools in the capital have a total of 2,800 students spread over the different teachings, and 150 teachers take care of them and attend to them. In public schools, 88 teachers are responsible for teaching the subject of Catholic religion and morals.
The diocese has 58 buildings of cultural interest and is currently undertaking a total of 11 construction and rehabilitation projects.