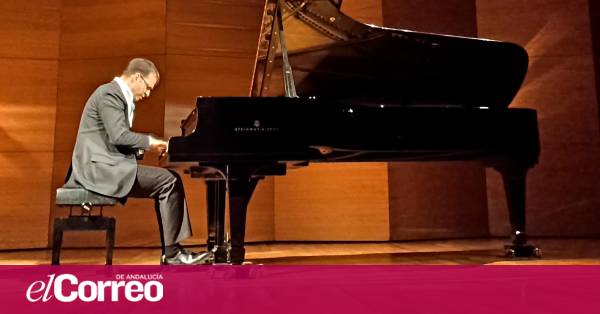 Although there was more attendance than expected, knowing the idiosyncrasies of the Sevillian public, the fact that this city treasures such a vast cultural heritage, indebted to the Arab heritage in a high percentage, would have deserved an almost absolute full house, something that perhaps would have been achieved through the mediation of some of the institutions that operate in the city in this regard, such as the Fundación Tres Culturas. The truth is Moroccan pianist Marouan Benabdallah came to our site to offer us a program that has been going around various places on the European continent for some time and in which it recounts some of the most representative composers of the Middle East and North Africawhose backgrounds and particular biographies have led them to combine their popular heritage with European or Western sensibility.

Benabdallah confessed that he barely knew a couple of these composers before dedicating himself to researching the subject, and that of the more than a hundred that he came to collect, he ended up making a sieve with the six summoned in this singular program. In clear and easily understandable English (this is often the case when spoken by people who are not naturally English speakers), the pianist profusely illustrated each of the summoned musicians and their pieces, shelling out data and anecdotes with charm and enthusiasm. However, taking into account the didactic nature of the evening, it would have been a detail have an interpreter in the room for those who do not understand the language, which in this country are still many people, even in the intellectual field.

From Algerian Salim Dada interpreted two miniatures, the first of very basic and contained literature, the second by dint of imitations of a typical Arab dance, where the pianist already slipped your keyboard skills. fate night It is a delicate work of the Franco-Syrian Succari Daywhich the interpreter was right to compare with the Ravelian universe and allowed him to express himself with spirituality and great sensitivity. The Male Rachamim is a Jewish prayer in memory of the dead that the American of Egyptian origin Mohammed Fairouz became a piece of music that he dedicated to his admired Ligeti and to the victims of the Nazi Holocaust. Benabdallah chose three of his five movements, going from the mystery and containment of the first to the percussive pulsation of the second and the devilish and virtuous rhythm of the finale, at all times leaving a record of its expository clarity and full command of the keyboard. All these works are profuse in arabesques and coiled and exotic figureslike the three pieces of opus 34 of Paul Ben Haim, a composer and conductor whose career was ruined also because of the Nazis. Your pastoral oozed mystery, while the canzoneta was a paragon of melody and sensitivity, and the toccata end another chance to deploy a brawny, fast-paced virtuositybut always under control.

According to Benabdallah himself, the best piece on the program, or at least his favourite, and perhaps the one with the greatest number of figures and resources learned from the author’s western journey, was due to the Lebanese Zad Moultakaseasoned in performance art and plastic arts, whose moaxajastypical poetic compositions of Muslim Spain, perfectly exemplify this singular combination of purely Arabic elements with those learned during his apprenticeship in France, achieving a symbiosis not without avant-garde that the pianist translated into a remarkable sensory experience. So was the beautiful night from Moroccan Nabil Benabdeljalil, the first work in his catalogue, reminiscent of Chopin but also, always according to the performer, of Granados. The end came in reverse, with a Western author enthralled with the East. In Africa, Saint-Saëns displays all his passion for Arab sensualitywith echoes of his bacchanalia for samson and delilah and a frenetic rhythm that supports a dense and bombastic writing. Benabdallah was very proud of his piano transcription, especially when comparing it with the one that the author himself outlined at the time. He took advantage of it to exhibit strength and temperamentalways based on virtuosity and without underestimating his expressive talent, which was also revealed in his tips, a Kara Toprak (Black Earth) of Easy Saywho was a resident artist at ROSS during the Axelrod era, where the influence of jazz on the Turkish composer is clearly visible, and the precious adage of Spartacusagain with a piano reduction of Khachaturian’s music that exudes romantic passion.

Marouan Benabdallah, filter of the West