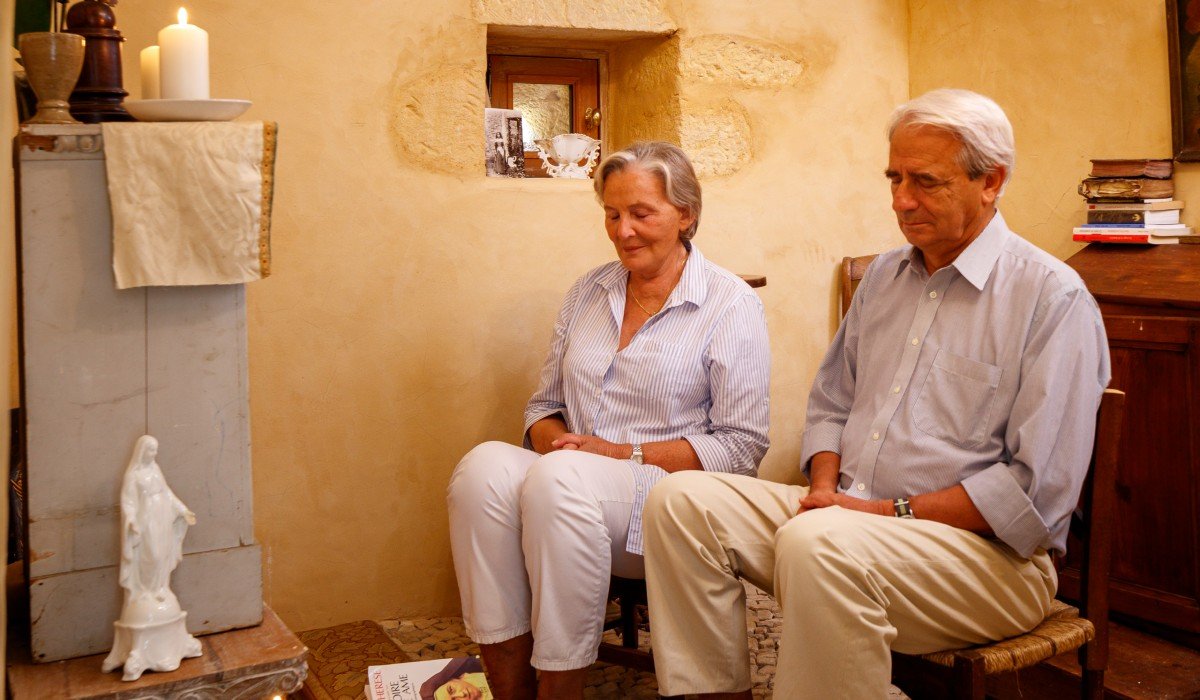 To lead a religious life alongside a regular order, while remaining in the world: this might seem contradictory, but this is how we can sum up the objective of third orders. Born at a time when the laity’s quest for holiness gave rise to great creativity (the 12th and 13th centuries), these associations enabled the faithful who so wished to belong to a religious order and to be inspired by their spirituality, while living normally in the secular world: work, family life, commitments. If they have changed a lot over time – in recent decades, a more marked community dimension has been given to them in particular – they continue, eight centuries later, to carry the same intuition and to support the spiritual life of the laity. In France, as elsewhere in the world, men and women of all ages and conditions discreetly join the lay branch of different religious orders each year, participating in their life and nourishing themselves with their spirituality.

Three of them, historical third orders, are still fully active today in France: the Secular Franciscan Order (Third Franciscan Order, also called Franciscan Lay Fraternity), the Dominican Lay Fraternities (Dominican Third Order) and the Secular Discalced Carmelites (Order of the Discalced Carmelites). Other third orders exist, but they are more conﬁdential (third order of the Trinitarians, third order of the Blessed Virgin Mary of Mount Carmel, etc.). Alongside them, other lay associations linked to religious congregations (Communities of Christian Life for the Society of Jesus, Lay Assumptionists for the Augustinians of the Assumption, Secular Fraternities of Saint Angela-Merici for the Ursulines, Communities lay Marianists, Spiritan Fraternity Spirit and Mission, Salesian Cooperators… (1)) have a similar objective – to rely on a religious order or a founder to allow lay people to progress in the spiritual life – but according to methods distinct from third orders .

Jeanne-Marie and Olivier Guillard are members of the secular Discalced Carmelite order, which involves praying every day. E. SANDER FOR FC

A way of sanctification specific to each order

Indeed, according to a very original model born in the 13th century among the Franciscans, the third orders imply that their members are fully recognized as members of the religious order. “Third Order is an old word for third order”explains to Christian Family Pierre Moracchini, historian and editor of the journal Franciscan studies. “Third order alongside the first order which are the Friars Minor and the second order which are the Poor Clares. » All are part of the Franciscan order. The same goes for the Dominicans. “Everyone is part of the order: the Fathers, the nuns and the laity”summarizes Catherine Masson, historian and author of a book on the history of the Dominican third order (2).

A symbol of this belonging, the temporary, then deﬁnitive commitment made by the laity who have decided, after a more or less long period of ” glance “, to be part of the third order is pronounced before the religious master of the order or his representative; he alone can release them from a deﬁnitive commitment.

What do you commit to when you become a member of a third order? The answer to this question differs from one to another. But, in a general way, before implying practical actions, joining a third order is a call to cultivate spirituality and the way of sanctification speciﬁc to each order: fraternal life and poverty for the Franciscans, prayer for the Carmelites, study and preaching for the Dominicans.

The common thread, being closer to the Gospel

The Rule of the Secular Franciscan Order (in France, about 3,000 people and 300 local fraternities) asks its members to “to live the Gospel of Our Lord Jesus Christ by following the example of Saint Francis of Assisi, who made Christ the inspiration and the center of his life with God and with men”of “apply to a frequent reading of the Gospel, passing from the Gospel to life and from life to the Gospel”. “There is great freedom in Franciscan spirituality”explains Catherine Delmas-Goyon, Vice-Minister of the Secular Franciscan Order. “The common thread is really to be as close as possible to the Gospel, and to translate it into our commitments every day. It is declined in poverty, minority, simplicity, in the fact of being brothers and sisters with each other [les tertiaires appartiennent à des Fraternités locales]. But we don’t have to do such a thing at such a time. » Concretely, the lay Franciscans are called to “to seek the living and active person of Christ in the brothers, in Sacred Scripture, in the Church and in liturgical actions”, to “follow the poor and crucified Christ”. “The Rule asks us, according to our commitments, our possibilities, our state of life, to pray every day, to attend the services as much as possible, without it being an obligationconfides Catherine Delmas-Goyon. Our bedside book is the Gospel and the Bible. I think that we all have the prayer of the Hours under our elbow and that we use it very regularly. We are also rediscovering the importance and richness of the first Franciscan texts. »

If freedom is particularly emphasized by the secular Franciscan order, the demands of the lay Dominican fraternities (700 members and 70 fraternities) and of the secular order of Discalced Carmelites (770 members and 66 communities), are often more concrete. For the former, the Rule thus evokes, among other things, the reading of Sacred Scripture, participation in Mass if possible every day, frequent confession, the celebration of the Liturgy of the Hours, the prayer of the rosary, the study of the truth and regular spiritual retreats. The Rule of the Secular Discalced Carmelites, for its part, provides that the Carmelite Secular sets aside a time each day for mental prayer and for saying lauds and vespers (and if possible compline). Still, in their implementation, great flexibility remains depending on the state of life of each. “It is a joy for me to pray the Liturgy of the Hours”says Gilles Berrut, a member of the lay Dominican Fraternities for forty-five years. “In the morning, I say lauds and in the evening, when I can, vespers. I work at the hospital in Nantes and I have a fairly long train journey so it makes things easier. The other pillar of Dominican prayer is the rosary, a prayer that supports contemplation. From time to time, I choose a mystery, depending on daily events. »

The response to a particular vocation

For Françoise Lauzon, president of the order of Secular Discalced Carmelites for the province of Paris (northern half of France, 30 communities, 330 people), the concrete actions involved in belonging to the third order can only be understood as the response to a particular vocation. “You don’t belong to an order like you join a club or an association. It is a very slow maturation which is motivated by a very deep desire for a certain form of prayer, a contemplative prayer. This is primarily what drives us. If we see what is asked as requirements, it will not work. It is the fruit of a call, of an attraction for contemplative prayer. » According to her, the lack one experiences when one is less available to respond to the requests indicated in the Rule of Order is in particular a good criterion of discernment. “If it is indeed the answer to a call, in times when it is more difﬁcult to live it – this was the case for me some time ago when my fourteen grandchildren were there -, we feel that something was missing from our day and our week. »

According to her, another criterion for discerning a possible call to integrate the regular order of Discalced Carmelites: the desire for a fraternal life. This point brings together the different Third Orders, which stress the importance of the groups (fraternities) to which the members of the Third Order belong and of the meetings (usually monthly) that bring them together. It is also one of the aspects on which third orders have evolved in recent decades. “In the 19th century, the Dominican third order was above all a place of personal sanctificationexplains Gilles Berrut. Since 1986, after the General Chapter in Chicago, lay people who join the third order have been members of a fraternity. They are not communities of life and good, outwardly they are groups like the others. But everything is organized around them and they are the place of preaching. » This dimension has become important for all third orders. She is very present in the order of Secular Discalced Carmelites. “Besides the Liturgy of the Hours – at least Lauds and Vespers – and a daily prayer time – at least half an hour –explains Françoise Lauzon, one of the important commitments is that of having a community life during the monthly meetings. Depending on the communities, these meetings are often organized over a day, during which we try to experience prayer, the Liturgy of the Hours at least once, and the Eucharist when possible. »

Fraternal life is also an essential pillar of the Secular Franciscan Order, whose fraternities also meet monthly. While the majority of members of Third Orders are lay people, secular priests may also be included (often as part of priestly fraternities). Secular and lay clerics thus coexist at the same level in a third order. The fact that the third order is part of the order also favors close relations between the lay fraternities and the men and women religious of the order (who are often the spiritual guides). At a time when clerics and lay people sometimes wonder about their respective place and their right relationship, the singular model of the third orders unites them all around the same spiritual quest.

(1) Lay people among preachers. From the order of penitence to lay fraternities, a history of the Dominican third orderby Catherine Masson, Deer, 2016.
(2) A non-exhaustive list of these associations is presented on the “Evangelical life groups” website: fs-gve.com.

Laity and Religious: In the Secret of Third Orders