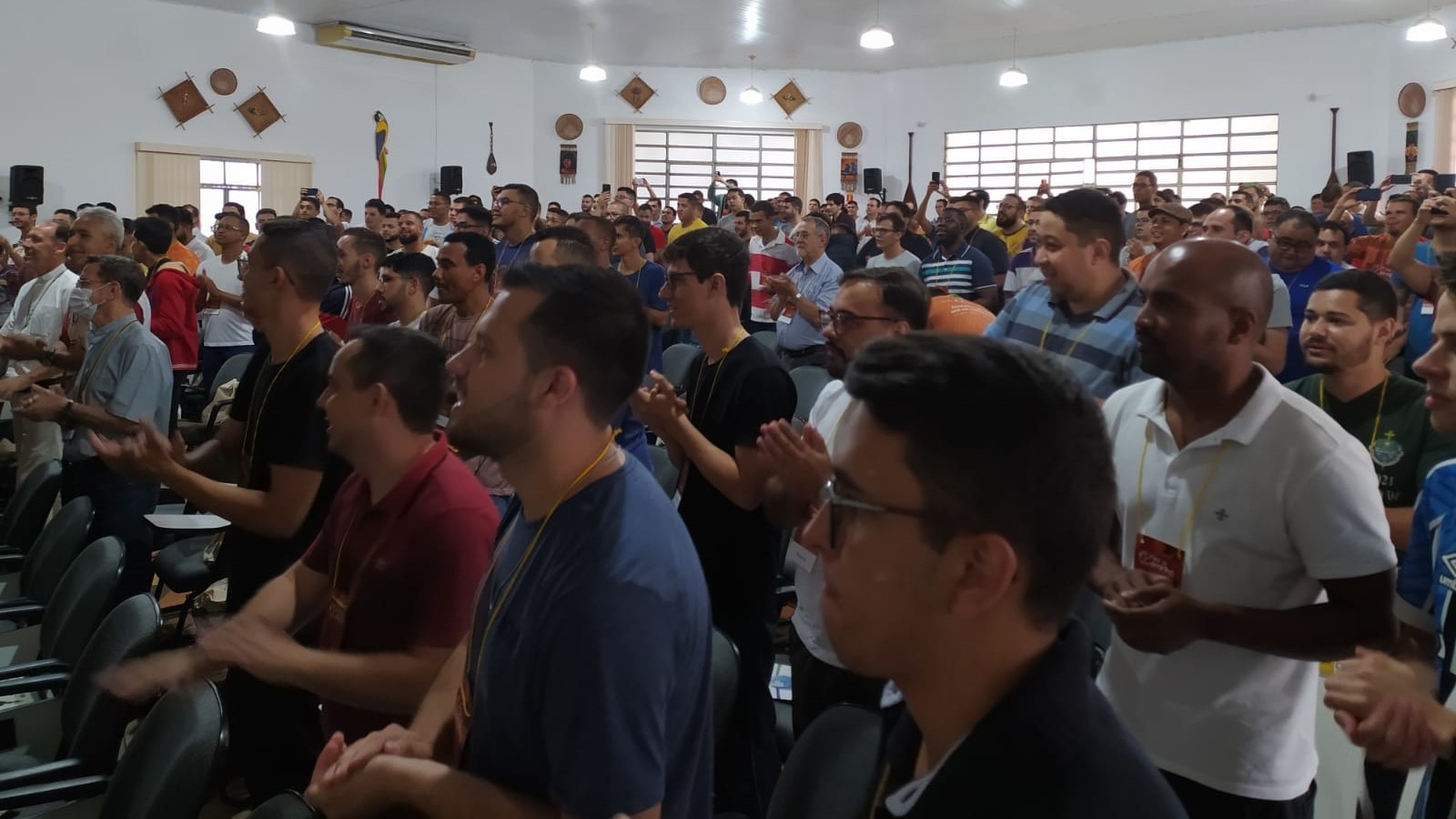 In the city of Manaus and its surroundings it is estimated the presence of about 40,000 indigenous people from 38 different towns

The importance of the mission in the current structure of the Church, collected in the Praedicate Evangelium, which wants to give new vigor to the pastoral action of the Church and a more missionary structure to the Curia, creating a dicastery that is under the direct responsibility of the Pope

“The proposal for the participating seminarians is to find the true meaning of their vocation, which is that deep down we are all called to be missionaries”

The San José de Manaus Seminary has been filled with the different accents of the participants of the I National Missionary Vocational Experience. They are diocesan and religious seminarians, priests, deacons, bishops, nuns, members of the Missionary Youth, willing to get to know the life of the communities of the Amazon for a week.

In total they are 280 missionaries from 94 dioceses of all the regional ones that are part of the Church in Brazil and more than a dozen religious congregations, welcomed with joy by the local Church, according to Msgr. José Albuquerque de Araújo, bishop-elect of the diocese of Parintins, who highlighted the existence of different Amazon and ecclesial experiences in the region.

It is an important moment in the initial formation process of future priests, according to Father Antonio Niemec. The national secretary of the POM Brazil sees this experience as an instrument of discernment in the formation process. A opportunity to find in the mission the true meaning of their vocation, stressed Father Zenildo Lima. The Rector of the San José de Manaus Seminary insisted on not seeing this activity as a parenthesis, a break in the life of the seminary.

A Church born of mission

The missionaries come to a Church born from a process of evangelization in which the relationship between the Church and the colonizers changed, according to professor Elisângela Maciel, from collaborationism to denunciation. The teacher called to discover, remembering the words of Pope Francis, that the Church is here to serve. She questioned putting the documents into practice, being prepared for Amazonian challenges, discovering the Amazonian face, solving the problem of the lack of the Eucharist, overcoming clericalism and implementing synodality in the Church.

In the history of the Church in the Amazon, the Santarém meeting, in 1972, occupies a prominent place. In 2022, the Church of the Amazon recalled what was experienced 50 years ago, noting the need for a Church incarnated in reality and for a liberating evangelization, according to Bishop José Ionilton Lisboa de Oliveira. A document that refers to the dreams of the Dear Amazon, seeking to build a Church with an Amazonian face, a call from Pope Francis.

In the city of Manaus and its surroundings it is estimated the presence of about 40,000 indigenous people from 38 different towns, arrived from different regions of the interior of the State of Amazonas to live on the outskirts of the great metropolis of the Amazon, where they try to maintain their cultures. According to the young indigenous Eliomar Tukano, this population came to Manaus because of the violence provoked by the exploiters of the Amazon, dreaming of jobs, education… People who want to live the mission from interculturality, because the discourse of “I am going to evangelize native peoples”, according to the young man from the Tukano people, no longer strains. They say they have their religion, although they accept the values ​​of Christianity that help in their Good Living and ask to be protagonists of the pastoral.

Mission is the mother of Theology

The mission is something that is part of the life of Bishop Luiz Fernando Lisboa, a missionary in Mozambique for 20 years, where he was bishop of the diocese of Pemba. The current Bishop of the Diocese of Cachoeiro do Itapemirim considers the mission as a leading and transversal axis in the Church, demanding a greater approach to missiology in the theological formation of seminarians, since, according to him, mission is the mother of theology.

The Bishop reflected on the mission in the Church after the Second Vatican Council, highlighting the importance it has in the current structure of the Church, collected in the Praedicate Evangelium, which wants give a new vigor to the pastoral action of the Church and a more missionary structure to the Curia, creating a dicastery that is under the direct responsibility of the Pope. The mission has changed the vision of the world of someone who says he has left Africa, but Africa has not abandoned him, a place where he says he learned to listen. For this reason, he invited the participants in the Missionary Vocational Experience to make themselves available to the Church and ask themselves where God wants to send them.

In relation to missionary spirituality, Bishop Esmeraldo Barreto Farias made a call to live it from the encounter with Jesus, loving the Church where each one is. The Bishop of Araçuaí reflected on the difficulties to live missionary spirituality, including practical relativism, carrying out the mission out of obligation or, in the words of Pope Francis, gray pragmatism. But he also highlighted the motivations for missionary zeal, such as cultivating inner space, rejecting the temptation of an intimate spirituality, or seeking an incarnated spirituality. Elements present in the National Missionary Program that guides the mission of the Church in Brazil.

Missionaries who perceive the First Vocational Missionary Experience as a reason for joy that awakens “the expectation of being able to enrich the training process“, according to the seminarian Carlos Daniel of the Diocese of Colatina. He, who is part of the National Commission of COMISE, highlights that “the proposal for the participating seminarians is to find the true meaning of their vocation, which is that deep down we are all called to be missionaries”. He hopes in this missionary vocational experience “to find myself also as a missionary, first of all, as a baptized Christian called to mission”.

Accompanying the seminarians of the Archdiocese of Ribeirão Preto, Father Manoel says that he came to the Amazon to “have an experience of reunion, know reality, live together, go to this deeper experience of the Gospel. To know the experience, to know the Gospel and to know the reality of each community, of each town”. According to him, “the Gospel is always this encounter, and above all having an experience of bringing to one’s own community this openness that is this Vocational Missionary Experience, an openness that transforms and helps to transform the Church.”

Gustavo Mariotto was sent by the San José Missionary Institute, and says that he hopes to “renew my vocation, the hope in the Church of better days, days of personal sanctification, sanctification also of the people of God, a time of grace, a Church on the way out , as our dear Pope Francis tells us”. Wal Rodrigues, representative of the Missionary Youth of the Archdiocese of Manaus, says that he seeks more knowledge in this experience and to form friendships, “because we are going out to meet each other“. He wants to receive the gratitude that is born from the fact of “being together, leaving my comfort zone to be together with the one whom I will find and whom the Lord sends”.

Missionaries sent during the Eucharistic celebration presided over by Bishop José Ionilton Lisboa de Oliveira. For more than a week, from January 7 to 15, They will visit communities from the peripheries, indigenous and riverside of the Archdiocese of Manaus, the Diocese of Coari and the Prelature of Itacoatiarawhere they are called to live the mission as a valuable and indispensable means for the formation of the missionary mentality and heart of the follower of Jesus Christ.

I National Missionary Vocational Experience in Brazil: “Expectation of being able to enrich the formation process”