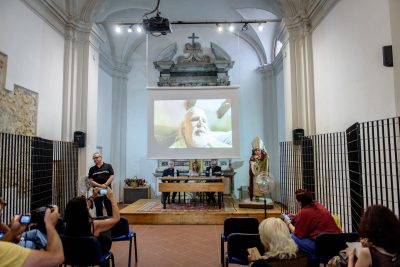 “The Golem is one of the greatest mythographies of modernity. In the Jewish mystical tradition it is the first form of robot, a humanoid built in clay ”. Like this Moni Ovadia introduces The Golem famous silent film of 1920 that Wednesday July 20 at 21 opens to Villalago the Piediluco Festival and anticipates the 2022 edition of the Terni Film Festival.

The new artistic director of Peoples and Religions is intervened in video link during the Press conference joint between Istess and Mirabil Eco which was held on July 14 at the Cenacolo San Marco in Terniin the presence of the director of the Institute Arnaldo Casaliof the bishop and president of Istess Francesco Antonio Sodduthe artistic director of the Piediluco Festival (as well as the organizational director of the Terni Film Festival) Lucrezia Proietti and the city councilor for culture Maurizio Cecconelli.

“The Golem – he explains Ovadia, which dedicated his very first show to the Jewish legend – had to be deactivated when the Sabbath came because he too, despite being artificial, had to rest. The figure of him has many meanings, including the one that man can intervene on matter, but without ever forgetting the spiritual dimension. The Golem was very powerful and very fragile at the same time. If it was not deactivated on Saturday, it could become destructive. And that is why it was rendered inert ”.

There screening on Wednesday 20 July will be accompanied live from composed music specially from Rossella Spinosawhich will play the piano accompanied by the violinist Tania Camargo Guarnieri. In the evocative setting overlooking Lake Piediluco there will also be a grandiose installation inspired by the manifesto of the Piediluco Festival 2022. Admission to the event is free.

“All of Us”: the call for the Terni Film Festival starts

It will be All of Us the title of the 2022 edition of the Terni Film Festival.

“As always, we are inspired by a film, in this case unpublished in Italy and which well represents this moment full of critical issues in which we must try to remain united” comments Arnaldo Casali, announcing theopening of the call for the Terni Film Festival: until the September 30th they will be able to register films, short films, documentaries or virtual reality workswhich can be sent via the Film Freeway platform or to the email redazione.popoliereligioni@gmail.com.

The competition A song for the Terni film festival

The contest will also return A song for the Terni Film Festival, designed by artistic director of Istess Musica Marialuna Onion and started in 2021. This year the participants will have to bring an “All of us” themed track and the winning song will become the theme song for the 18th edition of the Festival.

The projection of The Golem by Carl Boese and Paul Wegener it is only the first of a long series of events that will animate the pretty lakeside town and not only until the end of August.

“It’s about 25 appointments made up of concerts, theatrical performances and more that will unfold between Piediluco itself, Marmore, Terni and Celleno “he explains Lucrezia Proietti. “Some of them will be world premieres. A perfect combination will be created between local artists that we want to enhance and personalities of international importance, all in an ideal atmosphere for the public, which has never been lacking in past editions “.

The11 Augustat Grassi Garden of PiedilucoL’homage to Marcel Prouston the occasion of the centenary of his death, and, at the end of the Festival, three meetings on astrology which will be held in the new museum of the Marmore Falls.

The theme of the Festival

The theme of this edition of the Piediluco Festival is Nocturnes: “A reference to intimacy in the enjoyment of music” explains the artistic director, who also recalls the important milestone reached by Mirabil Eco. “The association, now in its thirtieth year of life, was born with a program of instrumental specialization courses for musicians and masterclasses, something that no one was doing at the time. Piediluco then is a place that lent itself a lot to reflection, study and isolation in a positive sense. It is a tradition that has continued over time, albeit changing its contents, and today we are more attentive to contemporary arts and all types of musical improvisation. Furthermore, Mirabil Eco collaborates with some municipalities in Lazio, starting with the neighboring Colli Sul Velino and Leonessa up to the Viterbo area of ​​Celleno, where La Notte dell’Arpia has been staged for some years now, a historical re-enactment organized by the Ghost Village of Celleno ”.

My Funny Valentine – musical aperitifs in the library

A taste of the 2022 edition of the Piediluco festival was already on Friday 8 July with My funny Valentine, a musical aperitif, in collaboration with the Istess, held in via San Marco in Terni at the entrance to the library of the Institute. “It is a dream that Lucrezia and I have been cultivating for many months: bringing culture among the people who, a few meters away, enjoy an aperitif, is in the sign of Peoples and Religions”, is the thought of Arnaldo Casali.

The Next appointment with the mini review is for the August 6 at 19 with the duo Jazz Portraits formed by Claudio Piselli on the vibraphone And Daniele Pozzovio at the pianoalso in via San Marco in front of the Giunio Tinarelli Library.

Both events, in addition to being financed by the Carit Foundation, are sponsored by the Municipality of Terni, present at the conference with thecouncilor for culture Cecconelli. “It is a pleasure to have this synergy between the Terni Film Festival and the Piediluco Festival. The latter in particular symbolizes a perfect harmony between environment and events ”, said Cecconelli.

Echoed the bishop of Terni Francesco Antonio Soddu: “These synergies send me back to the Synod that the Church is experiencing. Culture must be all-round because it concerns all aspects of the world ”.