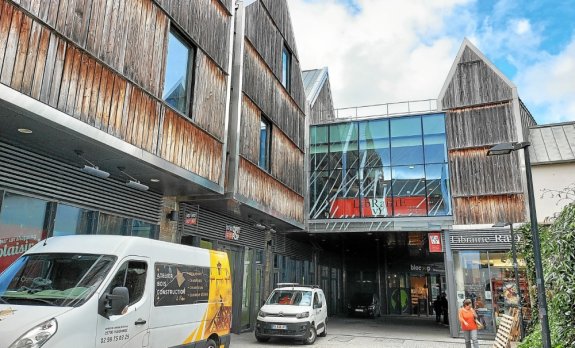 
“One of the largest cultural spaces in France, entirely dedicated to leisure and culture”. The director of the emblematic Quimper bookstore Ravy, established since 2011 in the Chapeau-Rouge gallery, does not go overboard when discussing what is happening on the site, and in particular behind the doors of the former premises of H & M. The bookstore that was sold to the Dialogues group in March 2021 is preparing for a serious growth crisis, six months after the gallery was bought by a group of local investors.

For the cultural sign, it is quite simply a question of doubling its surface, with a junction between the current building and the one being renovated. On the ground floor of the former H & M, place for youth.

“This first set will be designed like a theater backstage. You will find comics, music, science fiction, fantasy and a large space of 80 m2 reserved for manga, in great demand, which will allow us to better meet expectations,” explains our guide, Jean-Michel Blanc. This is also where the vinyls will be, one of the areas of development desired by the boss. “Things are picking up very strongly, and we want to give them pride of place. And since a 33 cm record takes up more space than an 11 cm CD cover, there will be room”.

Head to the first floor. Big, very big. Nearly 800 m2 that the workers have already begun to lay bare. And that makes room for it. Enough to develop the great ideas that Jean-Michel Blanc put on the table when he presented his project: a place for children with educational games and toys, on the principle of the children of Dialogues in Brest, another for beautiful – arts and creative hobbies for the general public, and finally spirituality, well-being and personal development shelves (in line with La Procure, which closed its doors in the spring).

“For the layout, we worked on the concept of a store with a theatrical spirit on the big plateau, you will have to see that, announces the manager. I like to evoke a garden of acclimatization in which one walks, a beautiful stroll”. And at the very end of this garden, a restaurant area with around forty seats, bathed in light, overlooking rue du Chapeau-Rouge with a direct view of the cathedral.

In the best of all possible worlds, the boss imagines an opening for the end of the year. “For Christmas, it would be ideal. Otherwise, we are thinking of setting up a pop-up shop in a cell”. Four or five days of complete closure of the bookstore will be necessary to carry out the shelving. The bookstore, which has fifteen employees, has planned to hire seven to eight people.

In the neighboring free cells, there is also hope. There would indeed be “keys” to occupy the vacant spaces. The owners even imagine full occupancy after the first quarter of 2023. “It’s a very good location, repeats Jean-Michel Blanc, I’ve always believed in it. And with the halls that are coming nearby, we’re going to have a new living space in town, it’s going to make a nice whole”.

Quimper – In Quimper, 2,000 m2 of culture and leisure that will amaze the gallery