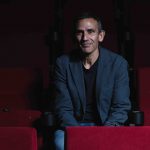 
This site uses technical, analytics and third-party cookies.
By continuing to browse, you accept the use of cookies.

The independent and auteur film festival is dedicating a retrospective to the Italian director and screenwriter, also screening the restored version of his debut feature film.

The Central and Eastern European Film Festival Al Este – Colombia invited the Italian director this year Michelangelo Frammartino as guest of honor of its fifth edition. Present in Colombia since 2018, the festival’s mission is to promote the independent film culture of Central and Eastern Europe in a fruitful cultural exchange with South America.

Thanks to the support ofItalian Institute of Cultureof theItalian Embassyfrom the Cinematheque of Bogota he was born in Medellin Museum of Modern Art – MAMMthe director presented his work and offered two masterclasses, in Bogota and Medellín, last December 2 and 3, accompanied by Alessandra Merlo, professor of cinema at Los Andes University in Bogota.

The meetings focused on the analysis of “Il Buco”, his most recent work recognized with the Special Jury Prize at the Venice Film Festival 2021 and shot in Southern Italy between Calabria and Basilicata which continue to inspire him and where they have been shot all of his previous works.

Among the most interesting and daring voices of contemporary Italian cinema, Michelangelo Frammartino took his first steps in the audiovisual world as a set designer for films and video clips, interested in the relationship between space and image right from the start, also due to his training as an architect . Always halfway between cinema and visual arts and with a strong link with experimentation. His first feature film “The Gift” (2003) premiered at the Locarno Film Festival and won the Grand Prix at the Annecy Film Festival and the Jury Prize in Thessaloniki and Warsaw. His second feature, “The Four Times” (2010), premiered at the Directors’ Fortnight at the Cannes Film Festival and won the Best European Film Award at Europa Cinemas in Cannes and the Main Award at CPH:DOX . With the approach of an anthropologist, Frammartino captures the traditional and the transcendent with the simplicity and spirituality typical of his filmography.

In the video intervention Frammartino tells the Italian readers of his satisfaction and enthusiasm for the stimulating meetings with the public and with the territory of Colombia in the frame of the Al Este Festival.