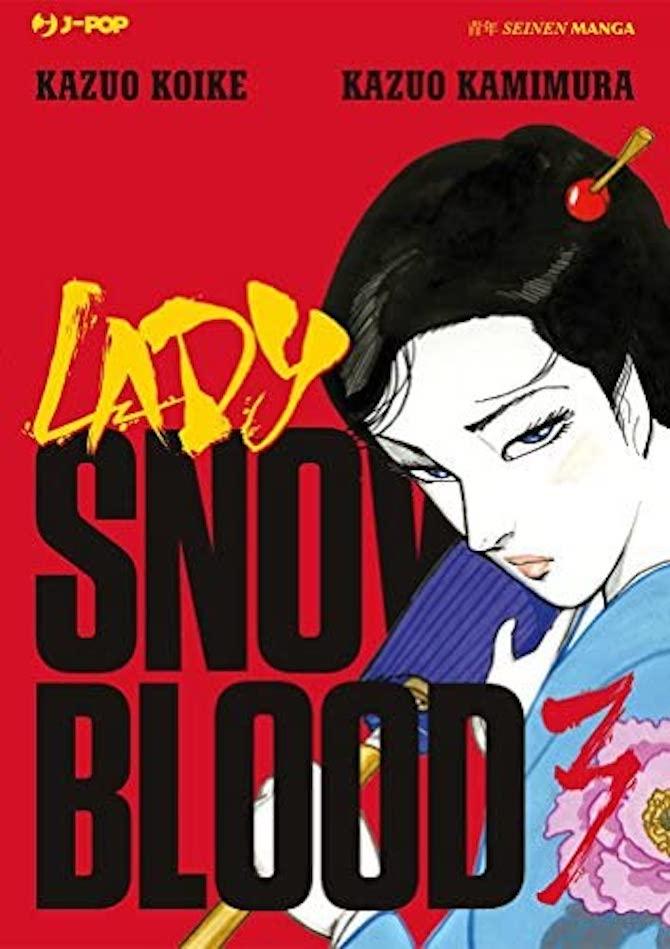 All the comics that Edizioni BD and its J-Pop editorial line will publish in the week from 26 December 2022 to 1 January 2023.

Finally in Italy the CULT masterpiece that inspired Quentin Tarantino’s KILL BILL. We are talking about a true icon of Japanese comics, SHURAYUKI HIME or LADY SNOWBLOOD, the work that has conquered the Japanese pulp/dramatic imaginary, giving life not only to a manga, but also to films and television series, such as those with starring the beautiful Meiko Kaji. Lady Snowblood is pure and simple revenge. Yuki has inherited a terrible fate from her mother. Yuki’s father was murdered by a group of men who used him to start a riot and abused her mother. The latter, managing to kill one of her tormentors, ends up in jail, sentenced to life imprisonment. Seduced by a guard in order to give birth to a little girl (Yuki), the woman dies in childbirth but she manages to instill in her daughter that desire for revenge that had not yet subsided. Now Yuki is a professional assassin, ruthless killer, beautiful woman, dangerous lover…

XII century. In the ruthless and wild plains of Mongolia, the young Temujin is about to resign himself to the icy embrace of death, while he sinks without a chance in the waters of a lake. Suddenly, however, a spirit prisoner in the depths of the water leads him to safety and reveals a glimpse of the future that awaits him: that boy who only a moment before seemed so helpless… is destined to make the whole world tremble! Between historical inspiration and a pinch of fantasy, thus begins the story of the spectacular journey of the one who will become the most legendary conqueror of Asia, Genghis Khan!

Danmachi- Is it wrong to pick up girls in a dungeon? 13
by Fujino Omori and Suzuhito Yasuda
€12.00 (buy online)

The monstrous underground labyrinth known as the Dungeon is the ultimate goal of the bravest groups of warriors, who venture there in search of fame and fortune. But would-be hero Bell Cranell has a far more pressing purpose for embarking on that mission: meet girls to seduce! Hey, what’s wrong with going through a maze to hit on chicks? Even if, in order to do so, Bell will have to explore the Dungeon in a guild made up of him alone and under the aegis of a cheap deity? Our solitary hero will certainly meet girls… the only problem is that the “damsel to save” of the situation could be him! Finally in Italy, the light novels of the hottest and wittiest fantasy saga of the moment!

It’s the beginning of a new adventure! Black is a boy who really wants to win the Pokémon league, while Bianca dreams of achieving success with her pokémon in the entertainment world. With strength and determination, the two young men begin a journey that will lead them throughout the Unova region, but soon the shadow of a new, mysterious threat will fall on their path… What turn will their destiny take?

In an unjust society, governed by a rigid and ruthless caste system, a very special child is born, Prince Siddhartha Gautama. Though surrounded by privileges, he is apathetic and doesn’t seem to need anything. The meeting with Tatta, a young thief of the lowest caste, will lead Siddhartha to confront reality in a new way and to take an unexpected path that will change himself and the whole world. Considered one of the masterpieces of Osamu Tezuka’s maturity, “Buddha” is much more than just the story of the life of Siddhartha, the man destined to become the founder of Buddhism and one of the key spiritual figures in history. With his unrivaled storytelling skills, Tezuka creates in this work a semi-fictional biography, which relies heavily on action to drive the plot and focuses on a large cast of characters. An adaptation that, betraying it in part, enhances the meaning of the original story and makes it even more exciting and symbolic.

Against the background of the post-war United States, J, a woman born in a man’s body, tells us in retrospect her troubled and painful path, in this poignant unpublished miniseries. The abuses she suffered at an early age, a horror from which J escapes with his mind dreaming of the myth of Marilyn Monroe. The tragic loss of both of her parents, which leads her to the prestigious Callensburg College, a rigid Catholic institution in which she will begin her transformation from caterpillar to butterfly. Her relationships with the many people who have dotted her path, starting with Paul, a schoolmate who masks with apparent severity the deep feelings she has for J.

Lonely, shy and a little frustrated. Dong Gyun has only one great outlet in life: every evening at 10pm he never misses a live broadcast of his favorite cam-boy, the BJ (broadcaster) Alex, a young man who loves to share the image of his gorgeous body on the net (but not his face) and the very piquant tales of his sexual experiences. Until, after a night of revelry with friends, Dong Gyun meets a kind waiter with a seemingly familiar body… that he is really the BJ Alex and, if so, it will really be how his fans imagine him in private life ?

All comics coming out this week

J-Pop: comics coming out this week

Firenze Spettacolo
The Anticipated Anime Is Heading To The Big Screen
Today the horoscope will help you if you say, I want you to read my tarot and it will confirm that C...
Tweet
Share
Share
Pin